Apes purposefully use signals to start and end social interactions

Apes like chimps and bonobos often use special signals to begin and end social interactions — much like we might say hello and goodbye — a study has found.

This behaviour had never before been seen in another species outside of humans, explained the researchers, who were led from Durham University.

The team also found that, just like with humans, bonobos who were close friends were more likely to be more relaxed about the social niceties when interacting. 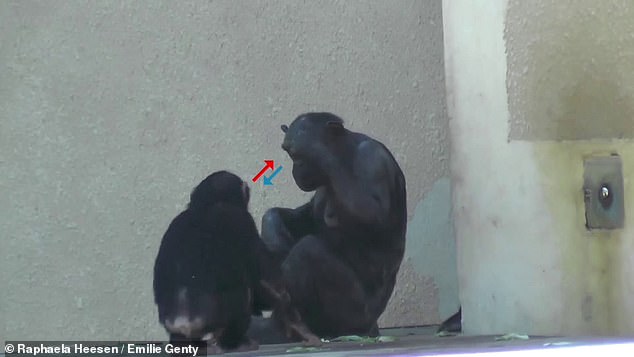 Apes like chimps and bonobos use special signals to begin and end social interactions — much like we might say hello and goodbye — a study has found. Pictured: chimpanzees Madingo (left) and Macourie (right) share a mutual gaze before Macourie grooms the younger male

The researchers found that social interactions between apes often began and end with distinct signals.

Signals may also be used to try to resume an activity that was interrupted, or if one of the pair does not want to end the social interaction.

When humans and apes signal shared intentions, they enter into a mutual sense of obligation known as ‘joint commitment’ — a phenomena long argued to be unique to human beings, but that now appears to have emerged earlier in our shared lineage.

‘We were able to launch rockets and land on the moon because we have the ability to share our intentions,’ said paper author and ‪comparative cognition‬ expert Raphaela Heesen of Durham University.

This, she added, ‘allows us to achieve things so much bigger than a single individual can achieve alone. [It] has been suggested to be at the heart of human nature.’

The researchers were inspired to investigate joint commitment in apes when they witnessed two bonobos — interrupted mid-grooming — appearing to use gestures to resume the activity they had previously been engaged.

Similar behaviours have been seen in studies of joint commitment among humans — with young children vocalising and offering toys to experimenters when the latter abruptly stopped playing with them in an effort to resume the abandoned game.

Dr Heesen and colleagues expanded on the existing theory by suggesting that joint commitment isn’t just based on a shared feeling of obligation, but also included the actions of setting up an agreement and mutually accepting when such is fulfilled.

In the example of a human conversation, then, a joint commitment to a conversation might begin with eye contact and a greeting — and go on to end with a signal phrase like ‘goodbye’, ‘okay, sounds good’, or something similar.

In their study, Dr Heesen and colleagues analysed a total of 1,242 interactions within groups of bonobos and chimpanzees living in zoos.

The team found that the apes did indeed frequently gaze at each other and use gestures — such as touching each other, butting heads or holding hands — in order to communicate the beginning and end of social interactions.

The team also looked at how the interactions were mediated by factors like apes having different levels of social power, or being socially bonded.

They found that the closer bonobos appeared to be to each other, the shorter the duration of the beginning and ending signal phases — and, sometimes, close pairs forewent such formalities completely.

This, Dr Heesen pointed out, is something we do too. She explained: ‘When you’re interacting with a good friend, you’re less likely to put in a lot of effort in communicating politely.’

The same trend was not seen among chimpanzees, however — a fact which may reflect the less egalitarian and friendship-based nature of their groups. 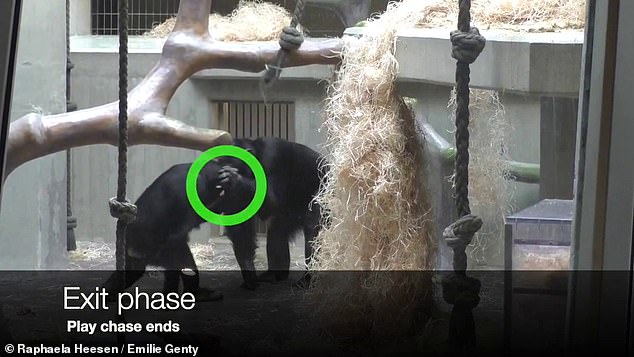 More work will be needed, however, to properly understand the origin and evolution of joint commitment, the researchers explained.

‘Behaviour doesn’t fossilize. You can’t dig up bones to look at how behaviour has evolved. But you can study our closest living relatives: great apes like chimpanzees and bonobos,’ said Dr Heesen.

‘Whether this type of communication is present in other species will also be interesting to study in the future.’

The full findings of the study were published in the journal iScience.

WHICH ARE SMARTER: CHIMPS OR CHILDREN?