Warm up your vocal cords, as a new karaoke feature is being launched on Apple Music that lets you remove the original singer from your favourite tracks.

Named ‘Apple Music Sing’, the music streaming service will also provide lyrics that animate in time to the original vocalist so users can live their pop star dreams.

Don’t worry if performing solo isn’t your thing, as the feature displays words sung by a backing singer or different vocalist separately.

Tens of millions of songs will be available to use with Apple Music Sing, which is due to be rolled out for subscribers worldwide later this month. 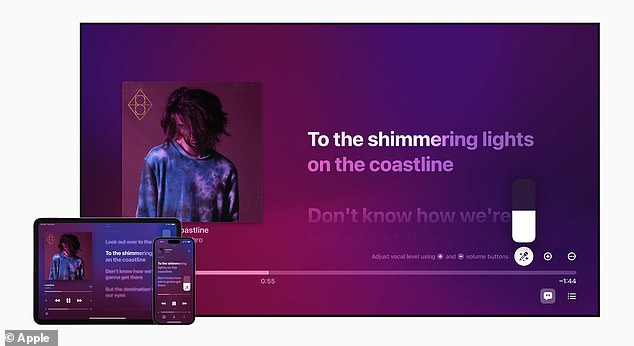 Apple Music Sing will let you turn down the volume of the original singer, and provide separate, real-time lyrics for backing vocals and duets 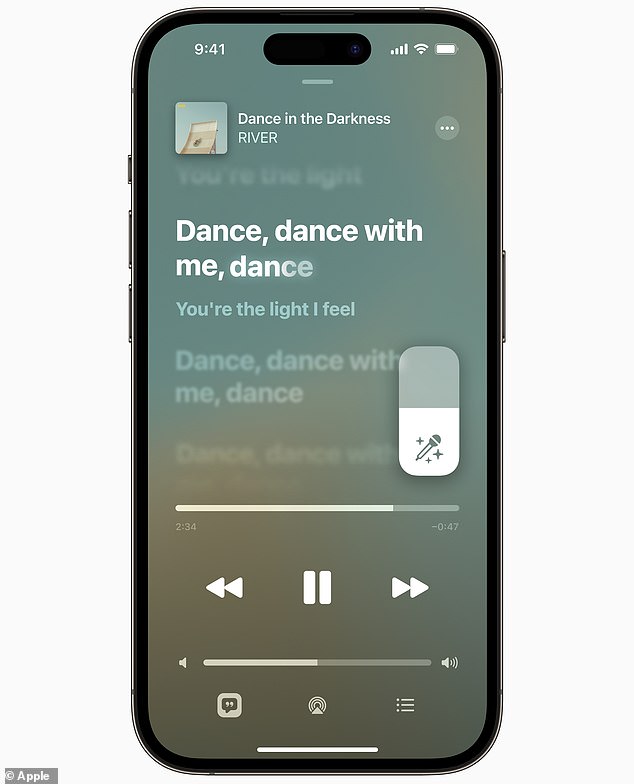 Tens of millions of songs will be available to use with Apple Music Sing, which is due to be rolled out for subscribers worldwide later this month

Adjustable vocals:  Users will be able to alter the volume of a track’s original vocalist.

Real-time lyrics: Individual lyrics will pop up and change colour in time to with the original vocalist.

Background vocals: When a track contains a backing vocalist, their lines will animate independently of the main lyrics.

Duet View:  When a song contains more than one vocalist, each of their lyrics will show on different sides of the screen.

Oliver Schusser, Apple’s vice president of Apple Music, said: ‘Apple Music’s lyrics experience is consistently one of the most popular features on our service.

‘We already know our users all over the world love to follow along to their favourite songs, so we wanted to evolve this offering even further to enable even more engagement around music through singing.’

When it is rolled out, Apple Music Sing will be available on compatible iPhone and iPad models, as well as the new Apple TV 4K.

It will be released with over 50 dedicated playlists filled with the best singalong tracks ready to go for your next karaoke night.

The feature will allow users to adjust the volume of a track’s original vocalist, so they can go completely solo or have a bit of support from some professional pipes.

While Apple Music does currently have the option of bringing up time-synced lyrics with certain songs, it does not guide the user word-by-word.

Instead, Apple Music Sing will display lyrics that change colour to indicate when it is time to sing them, just like in a karaoke booth.

When a track contains a backing vocalist, their lines will animate independently of the main lyrics, making it easier to follow along with the different parts.

A ‘Duet View’ option will also be available for tracks with multiple lead singers, where each vocalist’s lyrics will appear on different sides of the screen.

Only certain songs will be compatible with Apple Music Sing, and 9to5Mac says these could be the same tracks enabled with the ‘Spatial Audio’ surround sound feature.

This is provided by Dolby Atrmos, and requires a song’s separate audio stems, which will also be necessary to tune out the lead vocalist. 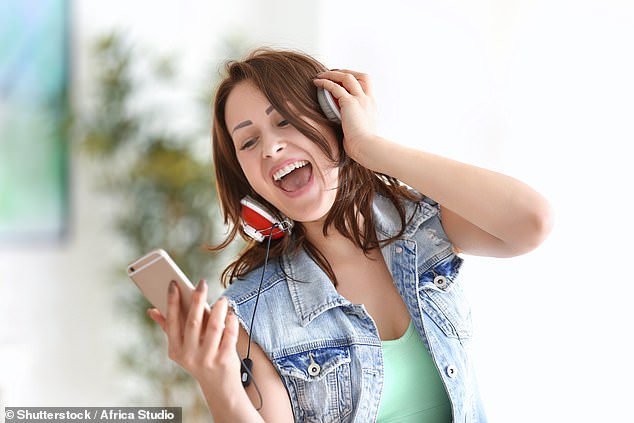 Apple Music Sing will display words that change colour to indicate when it is time to sing them, just like in a karaoke booth (stock image)

In June, it was announced that Spotify had started testing its own karaoke mode that judges how well a user sing along to songs.

The feature lets users sing along to songs and then gives them a score based on their vocal skills.

Karaoke mode has not been officially announced by the company, but several users have shared screenshots of the new feature on social media.

Users who already have access to the new karaoke feature claim that a ‘Sing’ button with a microphone icon appears in the top right corner of the lyrics panel.

Pressing the button causes the original vocals to be muted, but the backing track to continue playing, so that users can show off their vocal skills.

Once the song is over, the user is given a percentage ‘accuracy score’, along with a motivational message such as ‘You’re on the road to become famous!’ 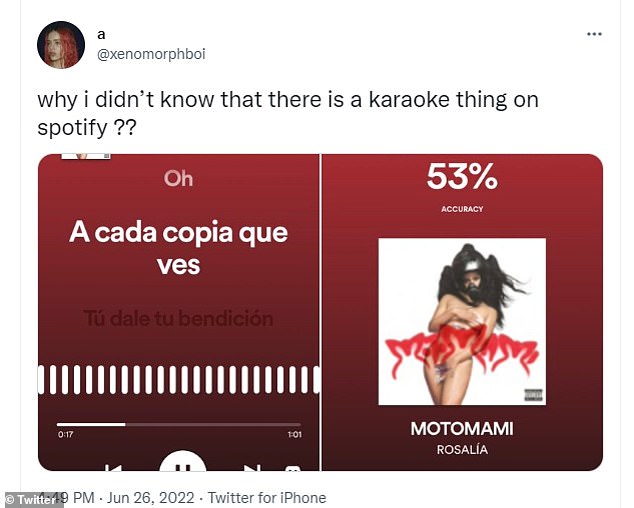 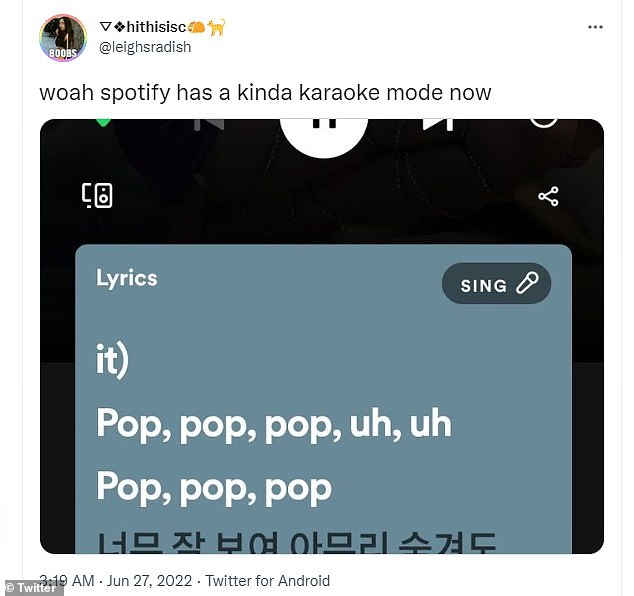 What your favourite song lyrics say about your romantic attachment style

Researchers from the University of Toronto say that the words to our most-loved tunes reveal our attachment style.

Individuals with a ‘secure’ attachment style are comfortable with proximity, while ‘avoidant’ people may pull away when their partner gets too close.

An ‘anxious’ attachment style indicates that the person tends to be overly attentive of their partner and seeks constant reassurance of their bond.

Lyrics like ‘guess she gave you things that I did not give to you’ from Adele’s ‘Someone Like You’ reflect an anxious attachment style, according to the study.

Individuals with an avoidant attachment style may gravitate towards Tina Turner’s ‘What’s Love Got to do With It?’, which includes the words ‘who needs a heart when a heart can be broken?’.

However, those with a secure attachment style may like ‘there ain’t no hill or mountain we cannot climb’ from Sonny & Cher’s ‘I Got You Babe’.