Archaeologists in Italy discovered a remarkably well-preserved ceremonial chariot near the ancient Roman city of Pompeii.

A statement on the Pompeii site’s website called it an “exceptional discovery” because “it represents a unique find – which has no parallel in Italy thus far – in an excellent state of preservation.”

The eruption of Mount Vesuvius in 79AD covered the city in volcanic ash, leaving it preserved and one of the world’s most famous archaeological sites.

Massimo Osanna, the outgoing Director of the Archaeological Park, said in a statement that the chariot was likely used for festivities and parades or bringing a bride to her wedding rather than everyday use.

He said that this type of chariot “has never before emerged from Italian soil.”

The chariot has four wheels and parts made of iron and decorations made of bronze, tin, and wood. 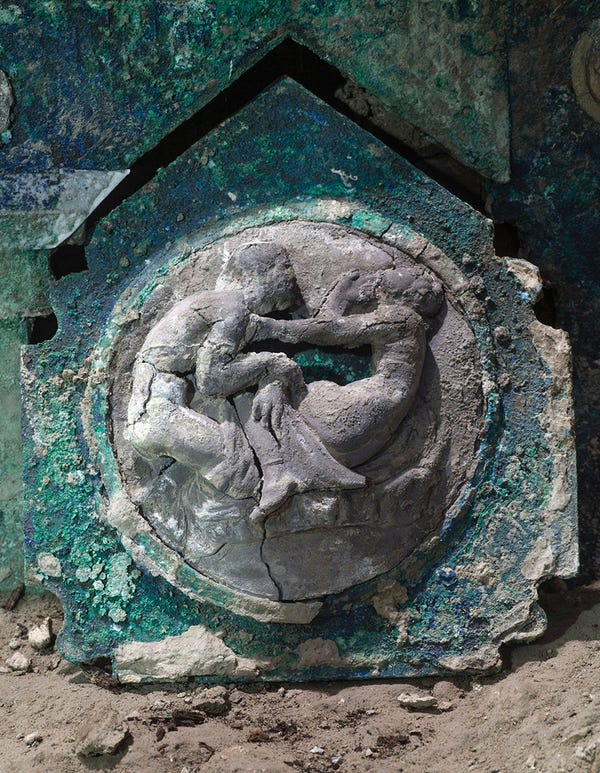 It was first located on January 7, but the excavation took weeks because the materials were fragile.

It “had miraculously been spared by both the collapse of the walls and ceiling of the room” that it was in and wasn’t damaged by people building illegal tunnels at the site.

Eric Poehler, a professor at the University of Massachusetts Amherst who studies Pompeii, said he was “astounded,” NPR reported.

“Many of the vehicles I’d written about before … are your standard station wagon or vehicle for taking the kids to soccer. This is a Lamborghini. This is an outright fancy, fancy car.”

Dario Franceschini, Italy’s Culture Minister, said Pompeii “continues to amaze us with its discoveries and it will do so for many years, with 20 hectares still to be dug up,” the BBC reported.

Discoveries in Pompeii have given us glimpses into ancient life.

Archaeologists previously made discoveries like an ancient fast-food counter, giving new insight into how people lived.