Archaeology breakthrough as drought exposes wealth of finds across Europe

Temperatures across much of Europe soared last month, with experts arguing scorching heatwaves could have brought on the worst drought in 500 years. The brutal drought has been causing chaos across the continent as rivers dry up, laying bare the impacts of climate change. No significant rainfall was recorded for nearly two months across western, central and southern Europe, with a “a very high risk of dry conditions” continuing over the next three months.

While crops are dying, boats are unable to pass through shallow waters and electricity shortages loom in regions reliant on hydroelectric power.

Martina Becker from the German company HGK Shipping said: “It’s quite extraordinary, particularly for this time of year.

“This is an unusual situation for us, and the question is what happens in October, when the usually dry months arrive. We are already approaching the record low level we had in 2018. We could reach that level next week.”

But while the drought is undeniably causing chaos, there is another phenomenon brought about by the extreme weather.

From Roman camps, to “hunger stones” and sunken Nazi ships, the world is being exposed to some stunning pieces of history not seen for years. 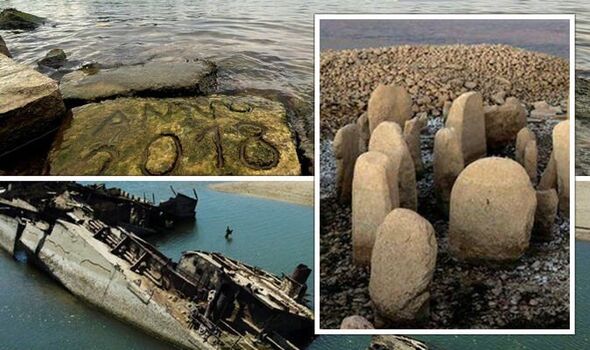 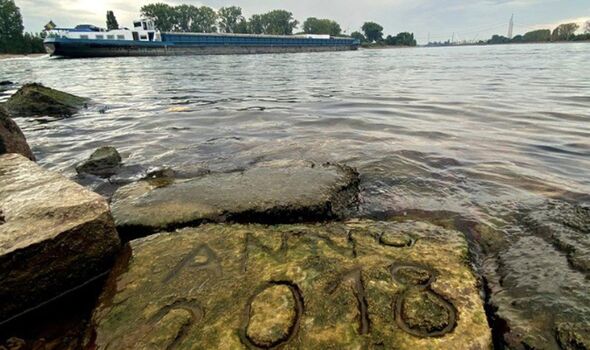 In the Danube in Serbia, low water levels have exposed the sunken remains of two ships from World War Two.

Discovered near the town of Prahovo, the vessels formed part of a Nazi fleet from 1944, and were still loaded with explosives when recently discovered.

And in the River Elbe, which flows from the Czech Republic through Germany, mysterious “hunger stones” have been discovered in its banks.

But the stones, which date back to the 15th century, have a rather ominous message.

Found in Děčín in central Europe, one of the stones has the words “if you see me, cry” carved onto them. 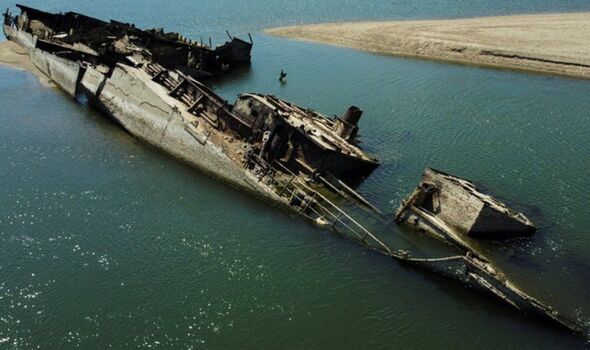 The words were reportedly first carved way back in 2016, which could have been a warning to future generations for when the stones finally surface from the water: that hardship lies ahead.

Traces of inscriptions are also said to relate to droughts dating all the way back to 1417 and 1473.

Another inscription in the Elbe stones reads: “When this goes under, life will become more colourful again.”

In Spain, water levels in the Valdecanas reservoir plummeted to just 28 percent of capacity due to the brutal drought.

But it did give onlookers a “rare opportunity” to take a glimpse at a stunning prehistoric stone circle dubbed “Spanish Stonehenge”. 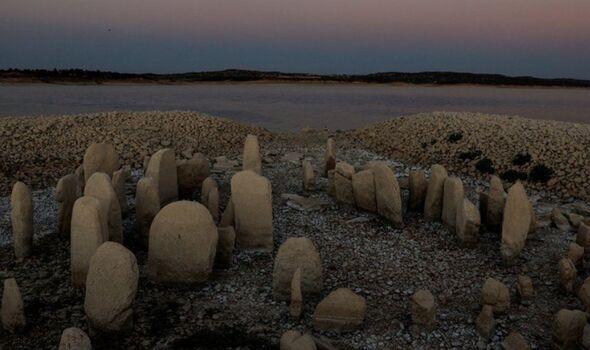 Enrique Cedillo, an archaeologist from Complutense University in Madrid, said: “It’s a surprise, it’s a rare opportunity to be able to access it.”

Officially called the Dolmen of Guadalperal, the vertically arranged megalith stones are now on full display in the corner of the Valdecanas reservoir
in Caceres.

In the As Conchas reservoir in Spain, the Roman fort known as Aquis Querquennis which was built between AD69 and 79 has also been exposed.

After becoming submerged in water in 1949, all of its 2.4 hectares (5.9 acres) have finally resurfaced. 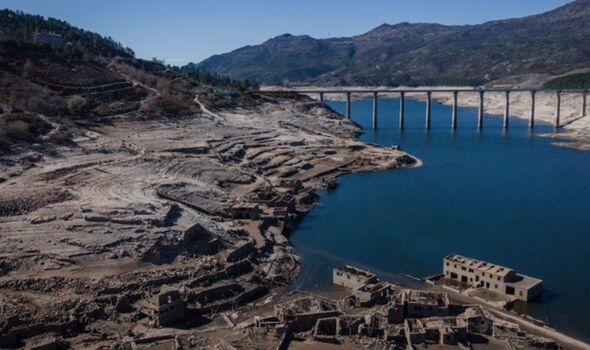 Also in Spain, in Galicia on the border with Portugal, a “ghost village” was unveiled, as drought forced the waters of a reservoir to dry up.

It comes after Aceredo was flooded back in 1992 by the River Lima to make way for the reservoir, called Alto Lindoso.

But after resurfacing back in spring due to the drought, the area has turned it into an unlikely tourist attraction, with some of its former residents even returning to have a look around.