A stunning partial solar eclipse will appear in skies across UK this morning, making the sun appear as if it has a ‘bite’ taken out of it.

About 25 per cent of the sun will be blocked out on Tuesday morning as the moon passes between the sun and Earth.

Stargazers across the UK will be able to see the phenomenon, but those in northern Scotland are expected to enjoy the best views.

In London, the eclipse will begin at 10:08, with the maximum eclipse occurring at 10:59, when the greatest amount of the sun will be hidden (around 15 per cent).

The event will end at 11:51 in London and the sun will appear normal again, unobscured by the moon.

Lerwick in the Shetland Isles is expected to have the best vantage point, with 28 per cent of the sun obscured at mid-eclipse.

However, astronomers have warned against looking directly at the sun during this morning’s event, which can cause permanent damage to the eyes. 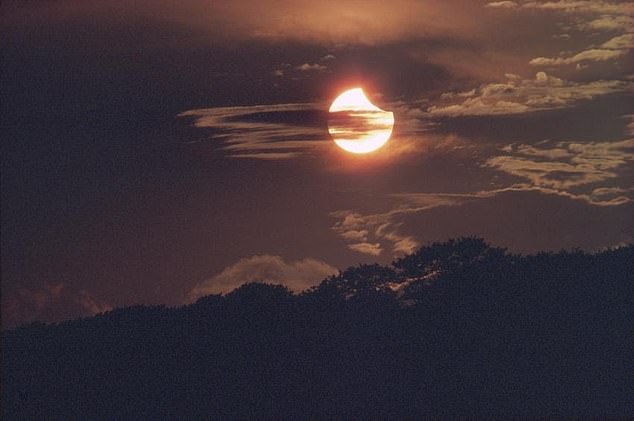 A stunning partial solar eclipse will appear in skies across UK this morning, making the sun appear as if it has a ‘bite’ taken out of it. Pictured is a partial eclipse, July 20, 1982, as seen from Harefield, England 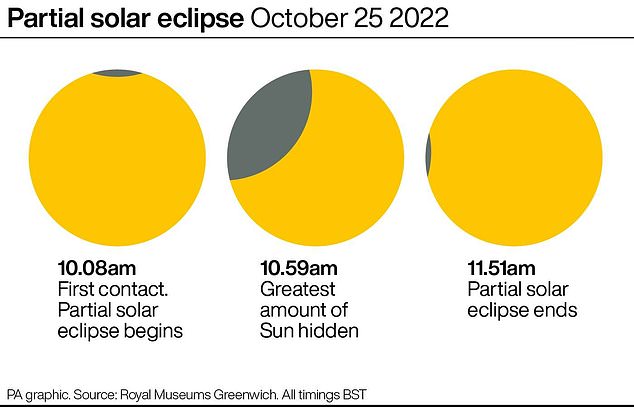 A partial solar eclipse is an eclipse of the sun in which the moon does not completely hide the solar surface. In London, the eclipse will begin at 10:08am with the maximum eclipse occurring at 10.59, when the moon will cover close to 15 per cent of the sun

WHEN CAN I SEE THE PARTIAL SOLAR ECLIPSE?

A solar eclipse occurs in the daytime at new moon, when the moon is between Earth and the sun.

Dr Robert Massey at the Royal Astronomical Society said this morning’s eclipse will cause the moon to block the view of ‘some or all of the bright solar surface’, and the sun will ‘appear to have a bite taken out of it’.

Observers in western Siberia, Russia, will get the best view of the eclipse, where the Moon will obscure a maximum of 85 per cent of the sun, Dr Massey added.

According to Jake Foster, astronomer at Royal Observatory Greenwich, the partial eclipse will be visible across the whole of the UK, as well as large parts of Europe and Central and South Asia.

‘The amount of obscuration you’ll see will depend on where you are on the Earth,’ he said.

‘Even though a portion of the sun’s light will be blocked, it will not get noticeably darker in the UK during the eclipse.’

Looking directly at the sun can cause serious damage to the eyes, even when a large fraction of the solar disc is blocked out, Dr Massey warns.

It is also not wise not to look at the sun through binoculars, telescopes or a telephoto lens on an SLR camera.

‘The simplest way to watch an eclipse is to use a pinhole in a piece of card,’ Dr Massey said.

Both a new moon and a solar eclipse occur when the moon is between Earth and the sun – but there is an important difference between the two events.

A new moon happens once during the moon’s lunar cycle and can happen without a solar eclipse happening.

‘An image of the sun can then be projected on to another piece of card behind it (experiment with the distance between the two, but it will need to be at least 30 cm).

‘Under no circumstances should you look through the pinhole.’

Dr Massey said another popular method used to view an eclipse is the mirror projection method.

‘You need a small, flat mirror and a means of placing it in the sun so that it reflects the sunlight into a room where you can view it on a wall or some sort of a flat screen,’ he said.

‘You may also have eclipse glasses with a certified safety mark, and these are available from specialist astronomy suppliers.

‘Provided these are not damaged in any way, you can then view the sun through them.’

Binoculars or telescopes can also be used to project the image of the sun.

‘Mount them on a tripod, and fit one piece of card with a hole in it over the eyepiece, and place another between 50 cm and a metre behind it, Dr Massey said.

‘Point the telescope or binoculars towards the sun and you should see its bright image on the separate card.’ 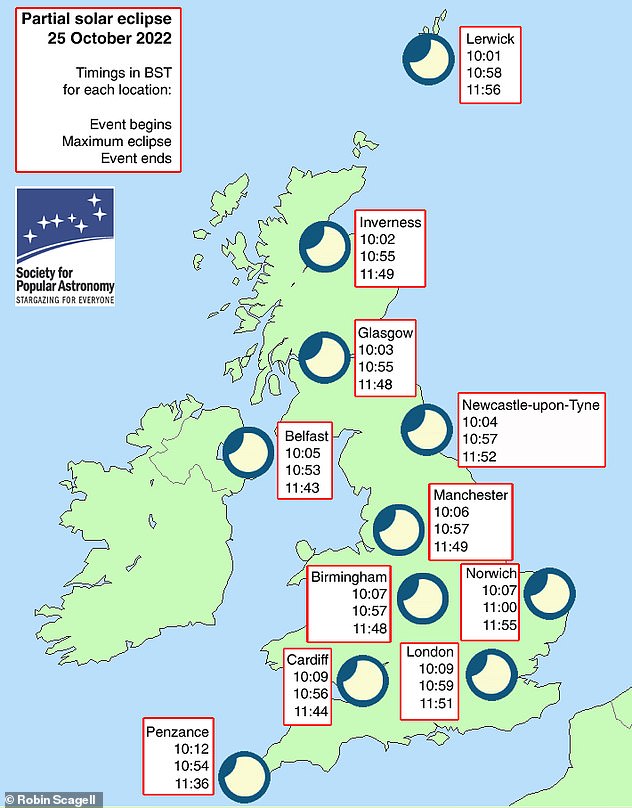 Eclipse timings across the UK. Those viewing from the UK will see between 10 per cent and 20 per cent of the sun covered by the moon

Unfortunately, the next total solar eclipse – when the moon completely blocks the face of the sun – isn’t visible in the UK isn’t until 2090.

However, the next US solar eclipse will take place on April 8, 2024, passing from Texas to Maine.

This will be seen as a partial eclipse in parts of Britain just before sunset.

WHEN IS THE NEXT TOTAL SOLAR ECLIPSE?

A total solar eclipse occurs when the sun, moon and Earth are directly in line with each other, and the solar face is completely blocked.

The people who see the total eclipse are in the centre of the moon’s shadow when it hits Earth. The sky becomes very dark, as if it were night.

The next US solar eclipse will take place on April 8, 2024, passing from Texas to Maine.

The next total solar eclipse after that is on August 12, 2026, and will be seen from the Arctic, Greenland, Iceland, Spain and Northeastern Portugal.

On September 2, 2035, China, northern Japan and Korea will witness a total solar eclipse.

Between 2023 and 2038, the greatest number of total solar eclipses will take place in Australia.

There will be five solar eclipses visible from the continent between April 20th, 2023 and December 26th, 2038.

The next total solar eclipse visible in the UK isn’t until 2090.