ARTEMIS 1 LAUNCH LIVE: Launch time delayed as NASA engineers investigate engine problems and crack in the body of Space Launch System rocket – due to blast off on 42-day journey around the moon today

Today marks the start of humanity’s return to the surface of the Moon for the first time since 1972, with the rocket set to land in three years’ time.

The mission will see an uncrewed Orion spacecraft circle the moon and return to Earth after a 42-day, 1.3 miIlion-mile voyage.

If all goes to plan, another flight will follow in 2024 – this time with astronauts on board – before human boots once again grace the lunar surface a year later as part of NASA’s ambitious $93 billion (£63 billion) Artemis programme.

People in campervans have been arriving at Cape Canaveral over the weekend, all vying for the best view of the enormous rocket’s lift-off.

Over 200,000 people are expected to line the beaches and causeways around the Kennedy Space Center to watch the launch, while millions more around the world will tune in on television.

MailOnline will be providing live updates of the launch in the blog below:

However, NASA is experiencing multiple pre-launch issues which engineers are racing to fix. The main one appears to be getting one of the engines under the rocket down to its correct operating temperature.

At the moment countdown has been halted at 40 minutes, meaning if lift-off does happen today it is likely to be towards the end of NASA’s launch window. 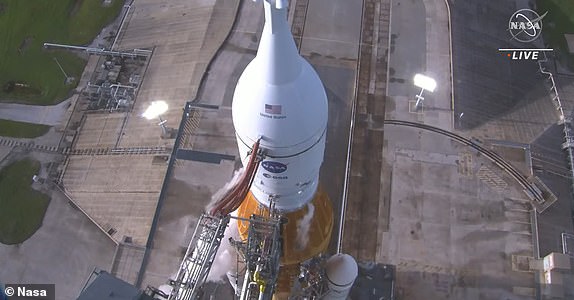 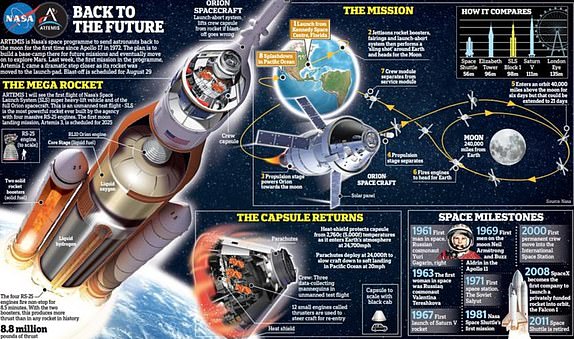 Administrator James Free and astronaut Randy Bresnik of NASA discuss the importance of the Artemis I mission to the moon and how the journey will be a ‘first test’ before an eventual Mars trip.

The dawn of a new era in moon exploration is now just hours away, as NASA prepares to launch the most powerful space rocket ever to leave Earth.

Here MailOnline answers everything you need to know about the forthcoming Artemis I mission.

NASA is experiencing multiple issues that are threatening to delay the launch of the world’s most powerful space rocket to the moon.

One of the Space Launch System’s engines is struggling to get to the proper temperature, while engineers are assessing what appears to be a crack in a flange on the core stage of the £19 billion rocket.