Asteroid that wiped out the dinosaurs sparked two YEARS of darkness

Asteroid that wiped out the dinosaurs 66 million years ago sparked two YEARS of darkness on Earth, study reveals

The asteroid that wiped out the dinosaurs and almost all life 66 million years ago, sparked two years of darkness on the Earth, a new study has revealed.

Soot from wildfires filled the sky and blocked out the Sun soon after the asteroid hit the planet, according to a team from the California Academy of Sciences.

The 7.5 mile-wide asteroid was travelling at 27,000 miles per hour when it slammed into what is now the Gulf of Mexico, leaving the Chicxulub crater.

The impact from the asteroid eventually led to the extinction of 75 per cent of all life on Earth, and scientists have long been studying the after effects of this impact.

In a new study, the US team discovered the main extinction trigger may have been clouds of ash and soot particles spreading through the atmosphere.

They say these clouds would have persisted for up to two years, putting large parts of the Earth in darkness, and making it hard for anything to grow or survive. 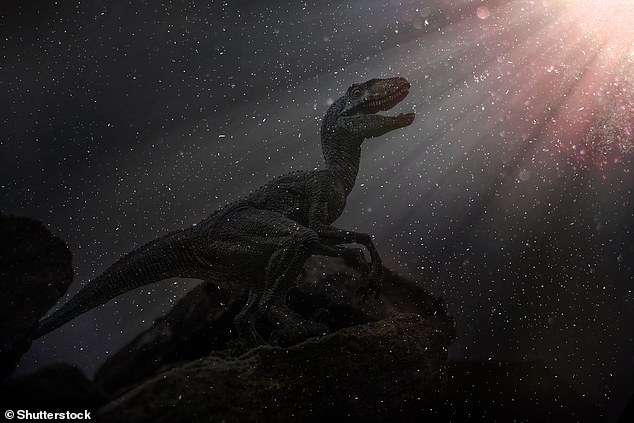 The asteroid that wiped out the dinosaurs and most life 66 million years ago sparked two years of darkness on the Earth, according to a new study

HOW THEY DETERMINED DARKNESS KILLED LIFE ON EARTH

For this study astronomers looked at a extensive fossil record, the Hell Creek community, from the time of the asteroid, about 66 million years ago.

They then ran a series of simulations of global darkness and how that would affect that specific community.

They ran different scenarios for anything from 100 days to 800 days of total darkness caused by ash clouds.

They knew before starting that about 75 per cent of species went extinct.

The team discovered that about 700 days of darkness was required to cause this level of extinction.

They also found that after the darkness faded, and the sunshine returned, it would take 40 years to recover.

Life in the area surrounding the impact would have been killed instantly, but there was significantly more damage in the years following the collision.

This includes tidal waves, flooding and massive environmental change, including the spewing of particles into the atmosphere, spreading around the world.

While the Earth was shrouded in darkness, the researchers say photosynthesis – the process plants use to grow – would have failed.

This would have led to an ecosystem collapse, and even after the sunlight returned, the decline in photosynthesis would have continued for decades, the team explained in an interview with Live Science.

This atmospheric darkness was caused by pulverised rock and sulphuric acid from the crash forming as clouds in the sky, cooling global temperatures and producing acid rain – that led to wildfires starting.

This ‘nuclear winter scenario’, as first proposed in the 1980s, played a major part in the mass extinction explained Peter Roopnarine, study author, to Live Science.

Despite it being theorised for more than four decades, it has only been in the past decade that models have been developed to see how this darkness impacted on life.

‘The common thinking now is that global wildfires would have been the main source of fine soot that would have been suspended into the upper atmosphere,’ Roopnarine said.

‘The concentration of soot within the first several days to weeks of the fires would have been high enough to reduce the amount of incoming sunlight to a level low enough to prevent photosynthesis.’

The team studied the impact of this long-term dark period by reconstructing the ecological communities that would have existed when the asteroid hit.

They picked 300 species that were known to come from a fossil-rich expanse known as the Hell Creek Formation, which is made of shale and sandstone in North Dakota, South Dakota, Wyoming and Montana.

Soot from wildfires filled the sky and blocked out the Sun soon after the asteroid hit the planet, according to a team from the California Academy of Sciences

They then created simulations to expose the communities to periods of darkness from 100 to 700 days to find out which interval of darkness would lead to the level of extinction we now know happened among vertebrate species.

The fossil records show about 73 per cent of vertebrate species went extinct following the impact event.

Roopnarine told Live Science the onset of the impact from the darkness would have happened quickly, reaching maximum within a few weeks.

Ecosystems could mostly recover if the darkness only lasted 150 days, but after 200 days they reached a ‘critical tipping point’.

This was the point where some species went extinct and dominance among the remaining species shifted in a way that harmed the ecosystem.

When darkness lasted up to 700 days then extinctions spiked dramatically – reaching up to 81 per cent of all life, suggesting that the animals int he Hell Creek communities experienced about two years of darkness.

‘Conditions varied across the globe because of atmospheric flow and temperature variation, but we estimated that the darkness could have persisted in the Hell Creek area for up to two years,’ Roopnarine told Live Science.

The findings are preliminary, he explained, and only explore a single ecosystem, but suggest this could rebound across more species.

Further simulations of the Hell Creek community found that if it was dark for 700 days, it would take 40 years for conditions to rebound.

The findings were presented at the annual meeting of the American Geophysical Union (AGU).