Astrophotographer snaps his 'clearest ever photo of the SUN'

Astrophotographer snaps his ‘clearest ever photo of the SUN’ – a 230 megapixel image made up from 100,000 pictures

A sensational blood-red image of the sun, made up from 100,000 pictures taken from Earth shows our star in intricate detail, including a building solar flare.

Astrophotographer Andrew McCarthy said the image of the sun was one of the ‘clearest’ photos he has ever taken of our host star, coming to 230 megapixels.

McCarthy has been photographing the sun and the moon for three years – but this month, he took on his ‘most unique challenge’ yet.

Using a new, ultra-sharp solar telescope, the photographer from California layered thousands of images over each other to capture the sun in breathtaking detail. 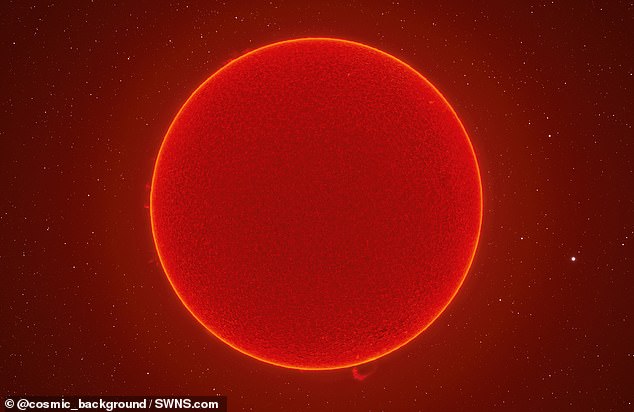 The huge, 230 megapixel image – a standard camera is about 10 megapixels – shows the round sun glowing a deep, dramatic red highlighted against a dark sky.

The combined photo is so clear that even the plasma right at the outer edge of the sun can be seen – dancing around in the atmosphere like a flame.

He had to take almost 100,000 individual photos of the sun – at a rate of about 100 photos per second to capture the amazing detail.

He said: ‘I was very pleased with the final result.’

‘I wasn’t sure if the image would turn out so well, as stitching together a large photo of the sun comes with unique challenges that I’ve never dealt with before.’

‘But I will definitely be producing more of these.’

He added: ‘To capture the sun in more detail than I’ve ever attempted, I assembled a new solar telescope that gave me 4000mm of focal length, about 10x the magnification of my previous telescope.

‘I used a technique called ‘lucky imaging’, so the best frames from a particular session are stacked together to help reduce the effects of the atmosphere.

‘These photos were captured just before noon, when the sun was high in the sky but while the atmosphere was still relatively calm. 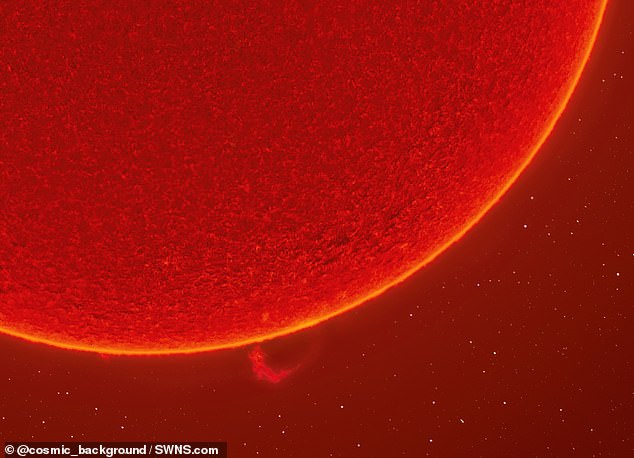 He had to take almost 100,000 individual photos of the sun – at a rate of about 100 photos per second to capture the amazing detail

‘By capturing close up details of the surface with this rig, timed when the atmosphere was very still, I was able to produce sharp details on its surface.

‘These objects around the edge of the Sun are known as a ‘prominence’ – a mass of plasma suspended in the solar atmosphere by the sun’s powerful magnetic field.

‘These happen quite frequently, and last a long time.’

To see more of Andrew’s amazing astrophotography, visit his Instagram page, or go to his Patreon.

THE SUN: A STAR AT THE CENTRE OF THE SOLAR SYSTEM

The sun is a G-type main sequence star at the heart of the solar system, whose radiation makes life possible on the Earth.

It is sometimes called a yellow dwarf star but this isn’t entirely accurate as its light is closer to white than orange.

The star formed about 4.6 billion years ago after the gravitational collapse of matter in a large molecular cloud.

Most of this matter led to the formation of the star itself, with the rest forming as a disc, orbiting the star and eventually coalescing into the planets, moons, asteroids and comets that make up the rest of the solar system.

The sun is 109 times larger than the Earth with a mass that is 330,000 times that of our host planet – in fact it accounts for 99.86% of the mass of the entire solar system including all the objects orbiting it.

The star will reach its red giant phase in about 7 billion years when the hydrogen in the core is no longer enough for fusion to happen.

In the red giant phase it will expand  to engulf the orbits of Mercury and Venus and leave the Earth uninhabitable.