Aye-ayes use their elongated finger to pick their NOSE, study finds

While picking one’s nose may seem a gruesome and socially unacceptable habit to us, it is a different story in the animal kingdom.

A new study reveals that aye-ayes – a long-fingered species of lemur – have been frequently spotted digging around in their nostrils.

It are one of the 12 primate species that exhibits this behaviour, which also includes chimpanzees, orangutans and, of course, humans.

Aye-ayes, or Daubentonia madagascariensis, have third and fourth fingers that are especially long to help them pull grubs out of trees to eat.

These are also the appendages they use to pick out bogeys, and scientists from the Natural History Museum, UK, have found they reach all the way back into their throat.

‘It was impossible not to notice this aye-aye picking its nose,’ said lead author Dr Anne-Claire Fabre, who studied one of the creatures, Kali, at the Duke Lemur Center in North Carolina, USA.

‘This was not just a one-off behaviour but something that it was fully engaged in, inserting its extremely long finger a surprisingly long way down its nose and then sampling whatever it dug up by licking its finger clean!’ 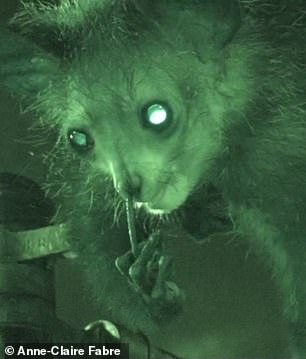 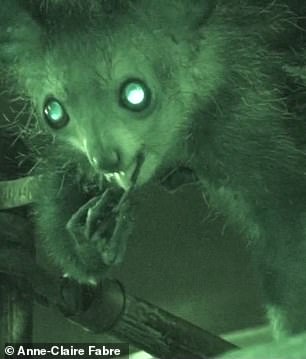 Aye-ayes (pictured) have third and fourth fingers that are especially long to help them pull grubs out of trees to eat, but they also use them to pick their nose 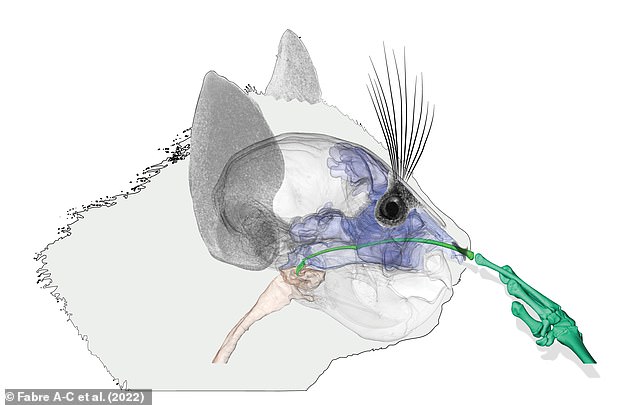 Aye-ayes use their long middle finger to pick out bogeys. Scientists from the Natural History Museum found that they reach all the way back into their throat, after taking a CT scan of the skull and hand of an aye-aye specimen (pictured)

The aye-aye is a species of strepsirrhine primate native to Madagascar, and the largest nocturnal primate in the world.

Unfortunately, some legends refer to the aye-aye as a harbinger of death, and that you are marked for this fate if one points their narrowest finger at you.

This has meant they are often killed on sight in some countries, and are classified as endangered by the International Union for Conservation of Nature. 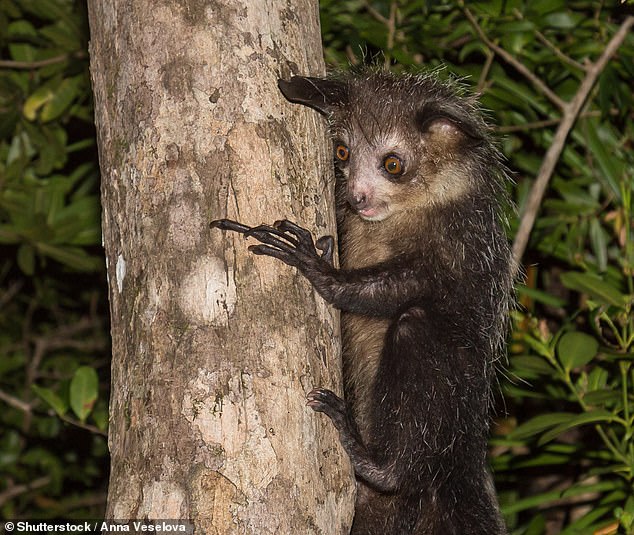 The aye-aye is a species of strepsirrhine primate native to Madagascar, and the largest nocturnal primate in the world (stock image)

In reality, their third and fourth fingers – or middle and ring fingers – are elongated and skinny to help them feed.

Aye-ayes tap on the wood of trees to generate acoustic reverberations which allow them to locate any grubs inside, in what’s known as percussive foraging.

They then gnaw a hole in the bark before inserting their narrow middle finger to pull the grubs out.

While studying the aye-aye’s, Dr Fabre noticed that they also use the entire length of their long middle finger to pick their nose and then lick the nasal mucus.

She decided to document this behaviour in her paper, published today in Journal of Zoology, while also consolidating all available research into nose-picking, or rhinotillexis, in primates.

In doing so, her team discovered that it has been observed in at least 12 primate species.

‘There is very little evidence about why we, and other animals, pick our nose,’ she said.

‘Of the serious studies, there are a few in the field of psychology, but for biology there’s hardly anything.’

To try and get a better understanding of the behaviour in aye-ayes, her team took a CT scan of the skull and hand of a specimen from the American Museum of Natural History.

They reconstructed the position of the middle finger inside the nasal cavity, and found it is likely to descend all the way into the creature’s throat when it picks its nose.

Previous studies on nose picking in primates have suggested that the ingestion of nasal mucus could bolster our immune system.

Others say it could also prevent bacteria from sticking to tooth surfaces, therefore improving oral health, as people who eat their own snot have fewer dental cavities.

However, the authors say that the reason primates enjoy eating their own mucus may simply be down to its texture, crunchiness and saltiness.

For aye-ayes, their long fingers could just be a useful tool for getting a tasty treat – both from trees and up their nose.

‘Papers like this can hopefully help draw attention to the species, highlight how little we may know about them and get more people to support their conservation.’ 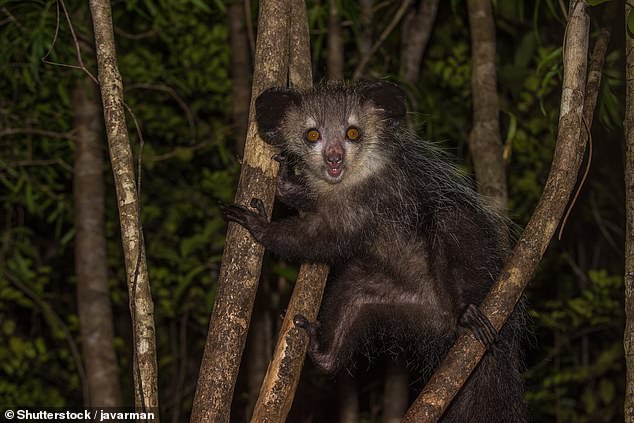 For aye-ayes, their long fingers may just be a useful tool for getting a tasty treat – both from trees and up their nose (stock image)

The primates that can handle their drink: Boozy aye-ayes and slow lorises go for nectar with the highest alcohol content

With its crazed eyes, sticky-out ears and hair standing on end, in some ways this unusual primate resembles certain humans at the end of a long night out.

But the strange type of lemur, know as the aye-aye, is also partial to a drink or two.

When given the choice the creature will pick the most alcoholic drink available, and when this runs out it will come back for more, according to a new study.

Researchers at Dartmouth College, New Hampshire, studied the behaviour of two aye-ayes and one slow loris, and found they picked the most alcoholic nectar on offer.

This was the first study to shows primates will pick alcoholic drinks over non-alcoholic.