Baby Mammoths Were Meals for These Saber-Tooth Cats

On a landscape that would one day become a suburb of San Antonio, paleontologists paint a picture that is as bloody as it is fascinating.

Mammoths were stalked by predatory cats with scimitar teeth protruding from their jaws. The cats would snatch a juvenile mammoth, blood staining the fur around their mouths and claws as it soaked into the grasses around them. Having eaten their fill, they would take the carcass back to their den. This was a meal that could be shared again later.

Earlier this month, researchers published a paper in the journal Current Biology providing evidence that supported this scenario. What it also shows is that the cats had a diet unlike any other large cat, extinct or alive today.

When most people think of saber-tooth cats, they think of North America’s Smilodon. But they prowled the same terrain as another ferocious but less well-known feline, Homotherium serum, also known as a scimitar cat. While the authors compare Homotherium to a cheetah in some respects, this cat appears to have been built more for long-distance running than sprinting. Its teeth were sharp and coarsely serrated, and its fangs were shorter than Smilodon’s iconic fangs. These shorter sabers may have been better at slashing as opposed to stabbing.

“Everything that we looked at basically told us that Smilodon and Homotherium are totally different cats,” said Larisa DeSantis, the paper’s lead author and a paleontologist at Vanderbilt University. She adds that although they were more closely related than any cat species living today, “They were able to coexist in these ecosystems likely due to having very different dietary niches.” 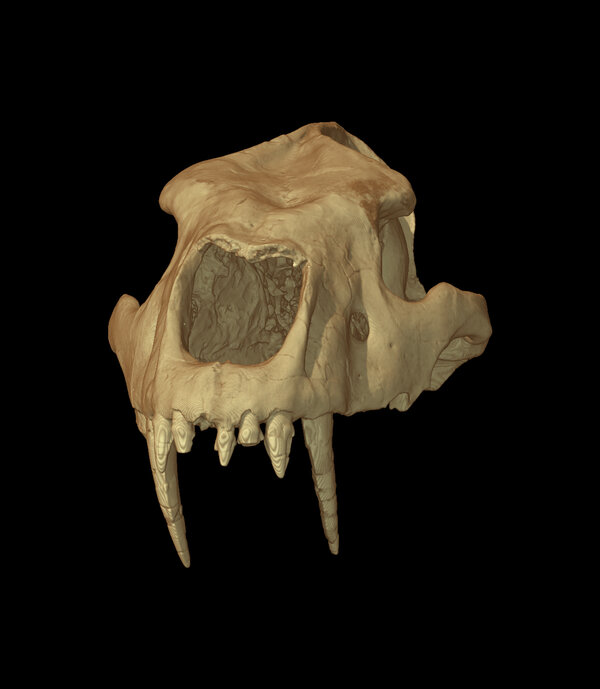 The Friesenhahn Cave outside San Antonio has produced more Homotherium fossils than any other site in the world. It’s a Pleistocene treasure trove, offering a diversity of fossil species, including a large number of juvenile mammoth bones. The abundance of Homotherium and mammoth suggests they may have been connected. But were they?

To answer this question, Dr. DeSantis and her colleagues had to establish the Homotherium diet.

They started with a three-dimensional analysis of the surface of Homotherium teeth, comparing them with similar predators during the Pleistocene as well as those that hunt today. They found that Homotherium ate soft and tough food, but not bones. If they were eating mammoths, this meant they could eat the animals’ tough hides and soft flesh, but avoided crunching bone material.

The researchers also found chemical signatures that offered clear evidence that these cats were eating herbivores that grazed in open habitats. Homotherium’s preference for grazing herbivores is unlike any other North American wild cat today or otherwise.

This analysis, combined with the discovery of numerous detached mammoth limb bones in a cave populated by Homotherium led the researchers to conclude that mammoths were on the menu, and remains were dragged home after a successful hunt.

“Like I don’t think the crew got together every weekend and went looking for mammoths.”

Mairin Balisi, paleoecologist at the La Brea Tar Pits and Museum who also was not involved in this research, praised the analysis in the paper, but added that it would be strengthened with “further evidence, like nitrogen isotopes from collagen, which might provide more insight about whether an animal is juvenile or not.”

That the fossils were available to study at all required a bit of luck.

The Friesenhahn Cave, on private property, was discovered in the early 20th century, studied, excavated, then lost and rediscovered again. Ernest Lundelius, a co-author and emeritus geoscientist at the University of Texas, Austin, has been working at the cave since 1957.

The most recent property owners, after hearing of the cave’s existence, rediscovered it and donated the site to Concordia University Texas in the 1990s. This donation, with the access afforded to paleontologists, and new scientific methods made the ideas in this recent paper possible.

“As paleontologists, we can only study fossils that are deposited in public collections,” Dr. DeSantis said, “and we can only go back to fossil sites and expand excavations when those fossil sites exist and are not destroyed.”