Are you stressed during back-to-back meetings? It’s all in your head! Spike in brain activity associated with mental efforts occurs when you skip breaks

New research finds the stress you feel during back-to-back meetings is all in your head.

Microsoft’s Human Factors Lab studied electrical activity participants’ brains as they endured one meeting after another, without breaks, and observed a spike in beta wave activity  – a characteristic seen during mental efforts.

The team also looked at another group who were given 10-minute breaks between meetings and found beta activity dropped, allowing the individual to reset and perform better during their next appointment.

Microsoft’s researchers said these findings prove that breaks are necessary to improve people’s ability to focus and engage during meetings and suggest that even grabbing a glass of water or stretching is enough to clear your head. 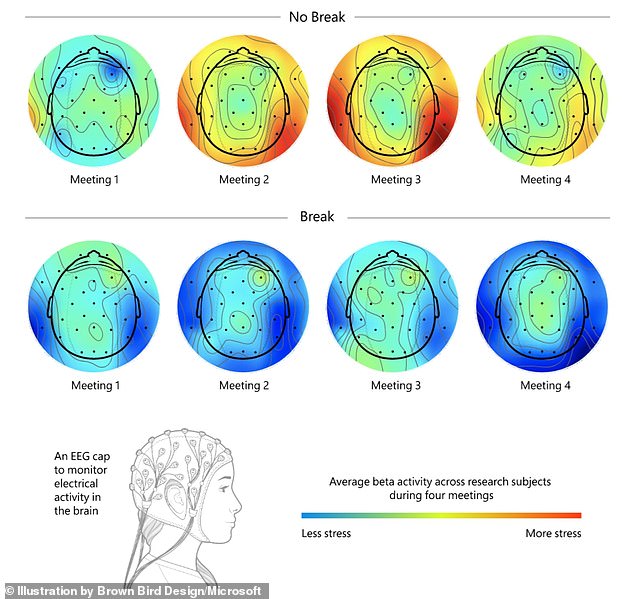 Participants wore an EEG cap to monitor brain activity while they endured four hours of meetings. Those with no breaks had a spike in beta wave activity – a characteristic seen during mental efforts

The research was released in 2021 while much of the world was working from home due to the coronavirus pandemic, and all meetings were held online.

However, now that the world is back to normal and offices are filled with staff, in-person meetings are again consuming people’s days.

And the study still applies.

Approximately 14 volunteers were fitted with electroencephalogram (EEG) equipment – a cap to monitor the electrical activity in their brains – while they attended meetings. 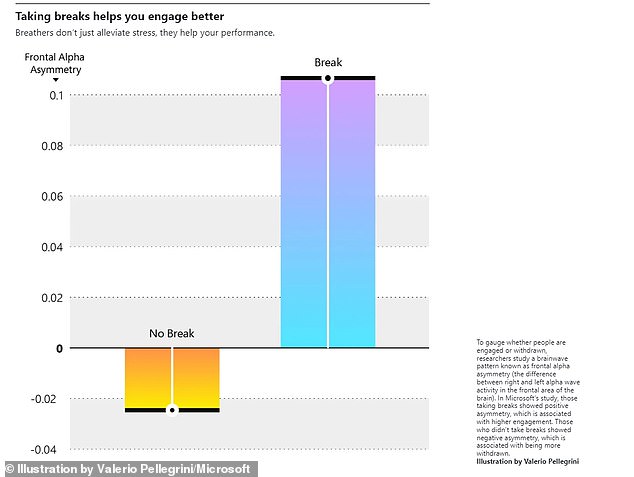 To gauge whether people are engaged or withdrawn, researchers study a brainwave pattern known as frontal alpha asymmetry (the difference between right and left alpha wave activity in the brain’s frontal area). Those who took breaks showed positive asymmetry

On the first day of the study, the group attended stretches of four half-hour meetings back-to-back, with each call devoted to different tasks and no breaks.

The following day, participants endured another round of four half-hour meetings, but this time had 10 minute breaks between each session.

‘As we’ve seen in previous studies, in two straight hours of back-to-back meetings, the average activity of beta waves—those associated with stress—increased over time. In other words, the stress kept accumulating,’ Microsoft shared in a press release.

‘But when participants were given a chance to rest using meditation, beta activity dropped, allowing for a ‘reset.’ 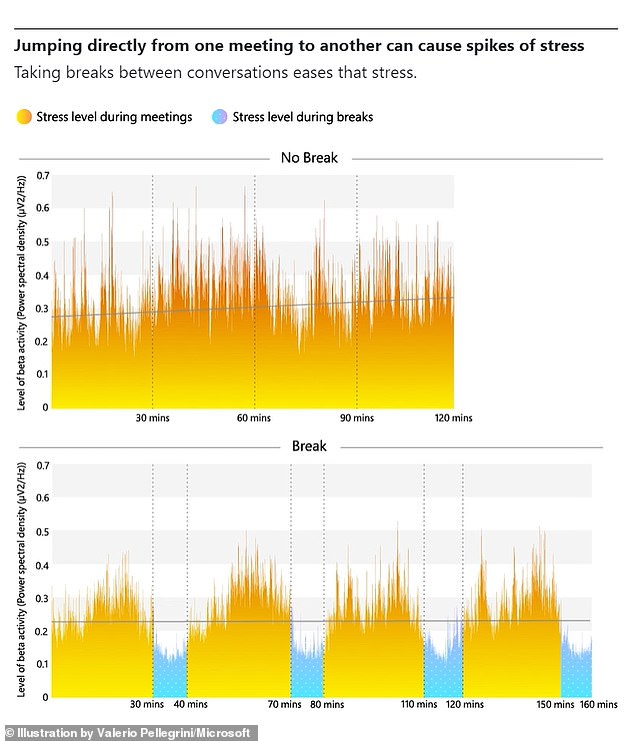 Without breaks, beta wave activity in the brain can rise sharply at the beginning and end of meetings. This suggests that at the end of one meeting, people are stressed about the next 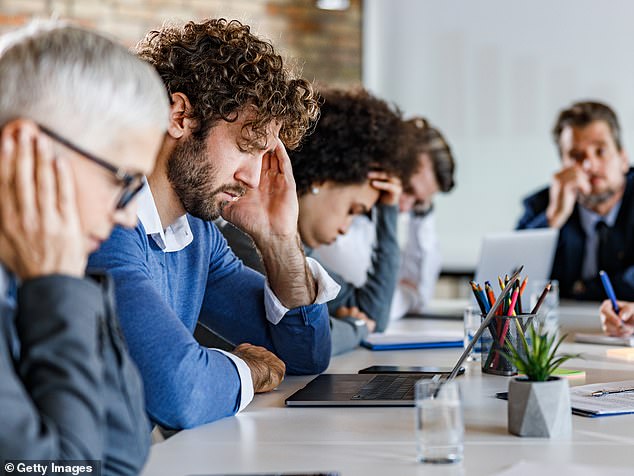 The team also looked at another group who were given 10-minute breaks between meetings and found beta activity dropped, allowing the individual to reset and perform better during their next appointment

Researchers also analyzed the difference in right and left alpha wave activity over the brain’s frontal regions, known as frontal alpha asymmetry, which correlates to higher engagement during the meeting.

Positive levels were found in brainwave patterns among participants who had breaks and those who did back-to-back meetings showed stress in the brain.

These individuals also reported it was harder to focus and engage in sessions.

Michael Bohan, senior director of Microsoft’s Human Factors Engineering group, who oversaw the project, said in a statement: ‘Our research shows breaks are important, not just to make us less exhausted by the end of the day, but to actually improve our ability to focus and engage while in those meetings.’