Best entries so far in the Comedy Wildlife Awards revealed

From a pouting boxfish to a giggling lion: Best entries so far in the 2021 Comedy Wildlife Photography Awards are revealed

Pictures of a pouting boxfish, a giggling lion and ninja prairie dog are among the ‘best entries so far’ in the 2021 Comedy Wildlife Photography awards, organisers say.

The annual photography competition is free to enter and is still open to anyone with a funny photo of our feathered or furry friends June 30, 2021.

Now in its seventh year, the Comedy Wildlife Photography Awards has already received thousands of entries from around the world, with six weeks still to go.

This year, the competition organisers are releasing some of the shots that have already had them howling like hyenas, to inspire both professional and amateur photographers to enter their own images before the deadline.

The chosen photographs show animals from across the planet, from Africa, the Caribbean to Brazil, captured at the perfect time. 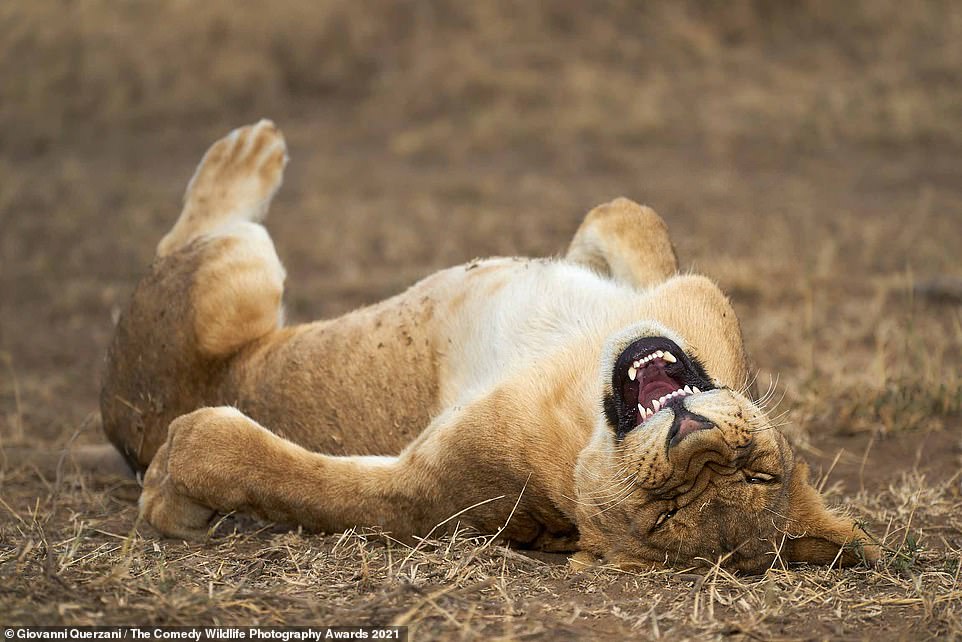 A young lion in the Serengeti National Park, Tanzania, apparently laughing at the photography skills of Giovanni Querzani 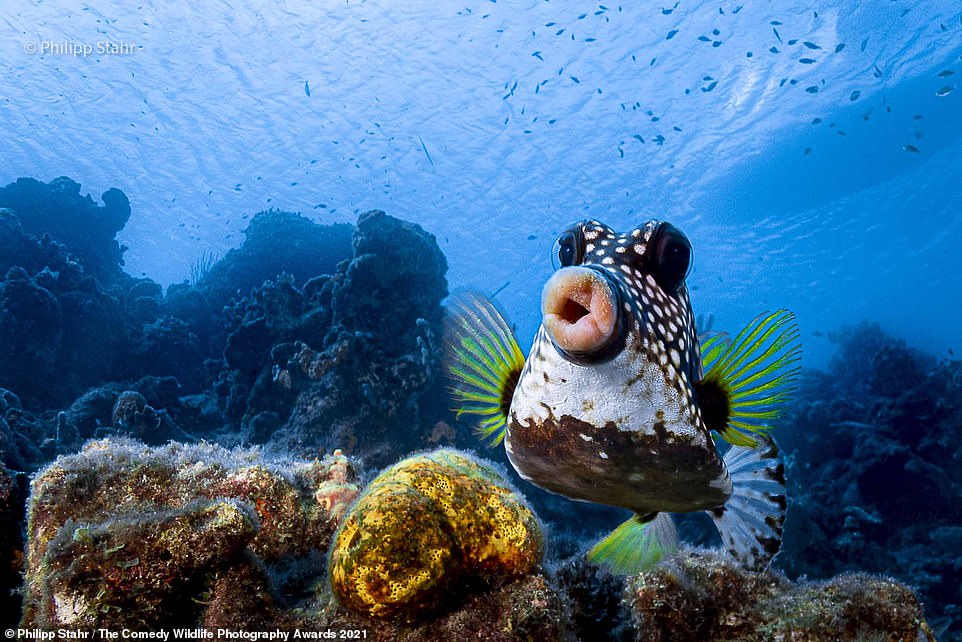 This picture was taken at Curao, Dutch Caribbean by Philipp Stahr. He said that usually box fishes are difficult to take pictures of as when they see a diver coming close they ‘always turn the back and not the face to you’

They include images of a moody pied starling showcasing its best frown, a bald eagle receiving a surprise from a prairie dog in Colorado and a group of penguins enjoying a surfing session in the Falkland Islands.

The duo wanted to create a competition that focused on the lighter side of wildlife photography and help promote the conservation of wildlife and habitats. 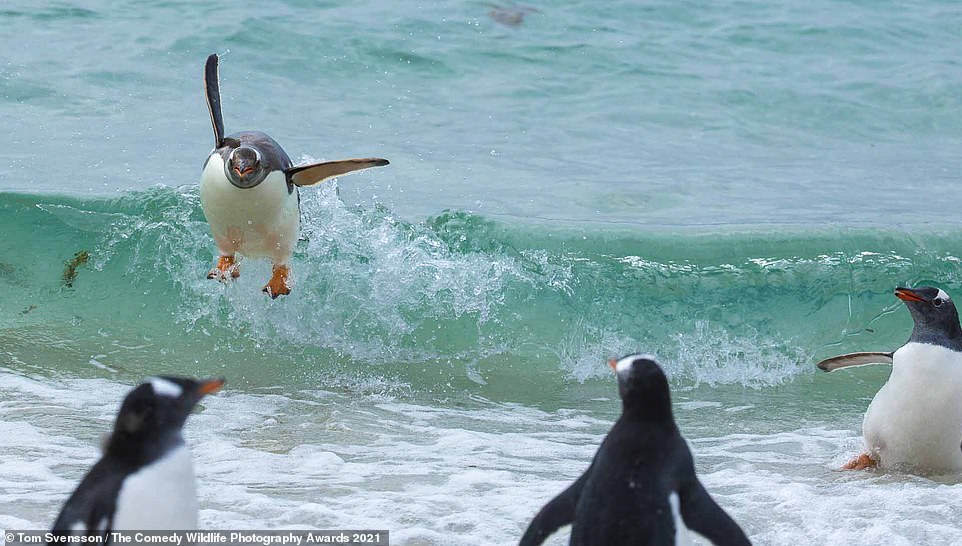 One of the images they shared from the ‘best so far’ was a picture of a pouting boxfish taken in the Dutch Carribbean by Philipp Stahr, who said they’re usually difficult to photograph as they ‘turn their back on you.’

‘That’s why I tried to swim 50cm above the fish and showing no interest at all to him,’ he said, adding that ‘at the same time I had my camera below at my chest pointing to the bottom.’

‘When the right moment had come, I turned the camera 90 degrees to the front and just point and shoot, hoping to have the fish in focus. Never expected to have its beautiful lips that close!’ 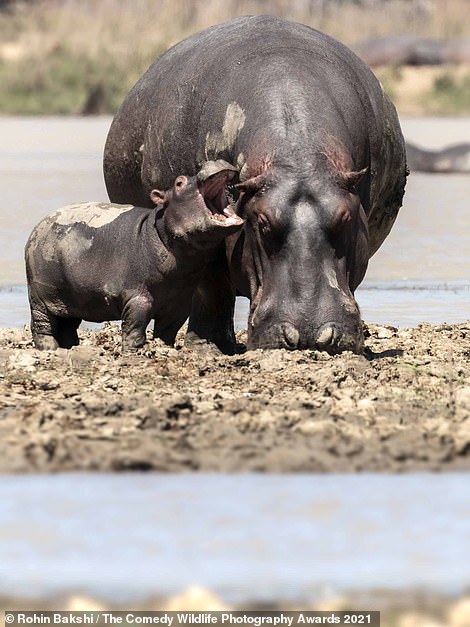 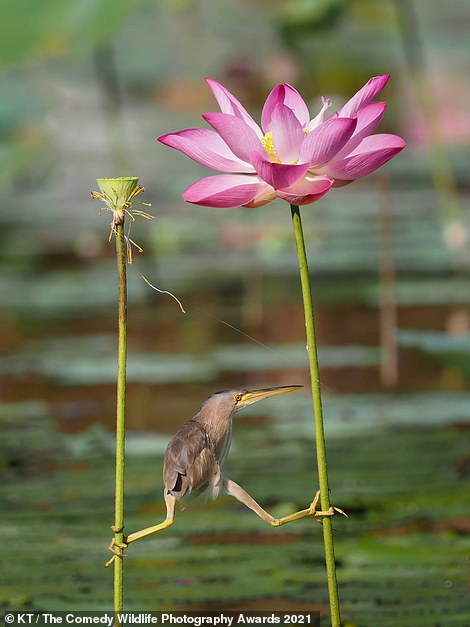 An image of an Eagle being surprised by a prairie dog was captured by Arthur Trevino in the US, he described it as a ‘real David vs Goliath story.’

‘When this Bald Eagle missed on its attempt to grab this prairie dog, the prairie dog jumped towards the eagle and startled it long enough to escape to a nearby burrow.’

Each year, the competition highlights a charity working tirelessly to protect vulnerable species, donating 10 per cent of its total net revenue to the charity. 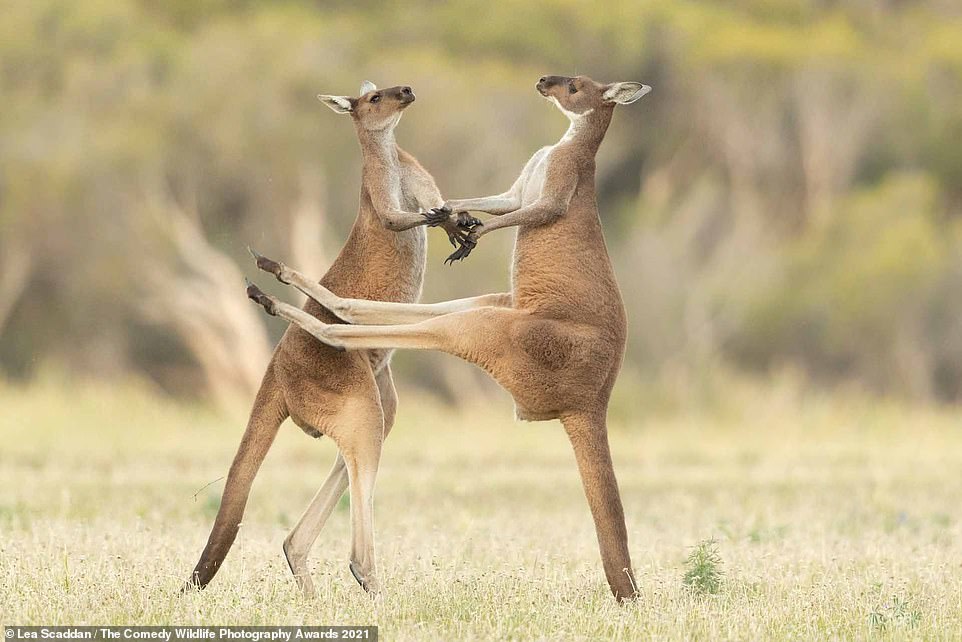 This year they are donating to Save Wild Orangutans, an initiative that safeguards wild orangutans in and around Gunung Palung National Park, Borneo.

Paul Joynson-Hicks MBE, Comedy Wildlife Photography Awards Co-Founder, said: “A lot of wildlife shown in these images are facing threats to their populations and habitats that are heart-breaking.

‘With this competition, we wanted to capture people’s attention and energy by giving them a giggle. In order to protect animals, we need people to fall in love with them.

‘We think these wondrous shots show a side of wildlife that we don’t often get to see. They remind us of the beauty, and comedy, in our natural world that needs protecting.’

The Comedy Wildlife Photography Awards 2021 is free to enter, with photographers able to enter up to ten photographs across six different categories.

The images shared by the awards organisers are designed to showcase the ‘best so far’, but suggest many more images could still be submitted and the first prize award is ‘wide open’.

One image they shared was taken by Lucy Beveridge from Spain, it shows a young springbok ‘all ears and spindly legs pronking’ at the Kgalagadi Transfrontier Park in South Africa.

‘There’s not much information on why the Springbok pronk but some theories suggest it is a way of showing fitness and strength to ward off predators and attract mates.

‘It has also been said that this small, dainty and largely unappreciated antelope also pronks out of excitement, jumping for joy!’ 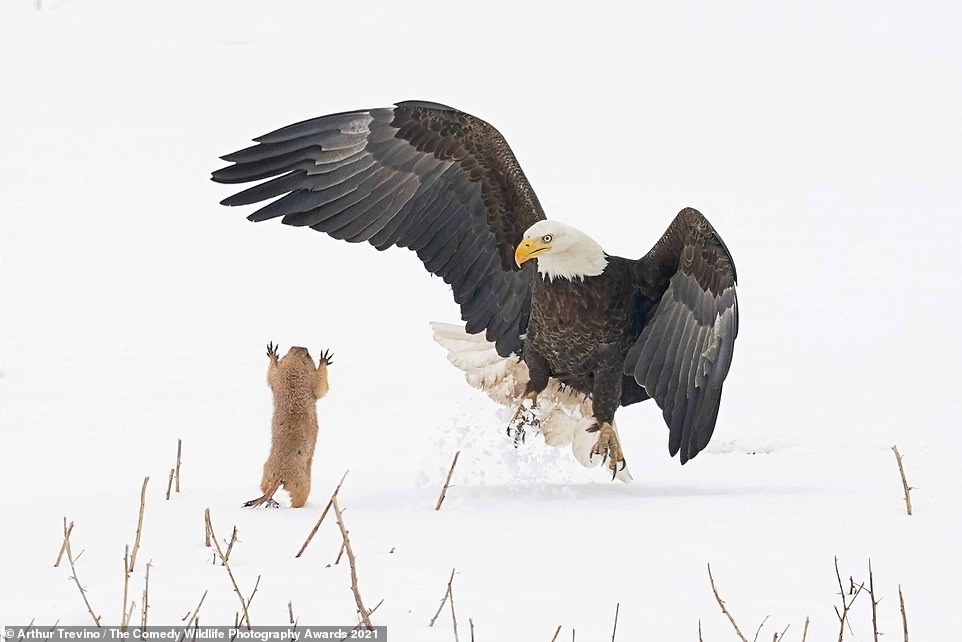 Arthur Trevino from Longmont, US, caught this bald eagle being surprised by a prairie dog, saying the dog jumped towards the eagle, startling it long enough to escape into a burrow 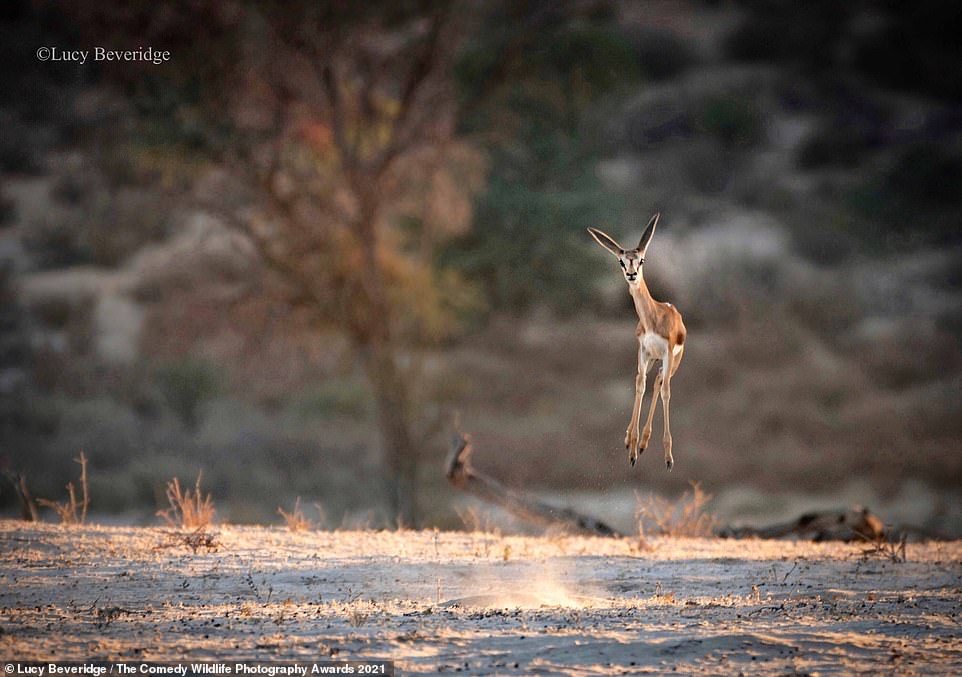 Lucy Beveridge from Madrid, Spain caught this young springbok, all ears and spindly legs, in midair while pronking as the sun started to rise over the Kgalagadi Transfrontier Park in South Africa

Categories include: Land, Air, Juniors (for those aged 16 and under), Portfolio (a selection of four images), Underwater and Video Clips.

This year the prizes range from a once-in-a-lifetime safari in the Maasai Mara in Kenya, a subscription to Affinity Photo, a camera bag from ThinkTank and, of course, the prestigious title of 2021 Comedy Wildlife Photographer of the Year.

Tom Sullam, awards co-founder, said the hope is that people look at the images, share with family and friends the one they think should win.

One image they shared that could win features a family of racoons huddled together in a whole in the bark of a tree, taken by Kevin Biskaborn in Canada.

‘Isolated inside with your family eager to get out and explore the world? These eastern raccoon kits are too. Just when you think there’s no more room in the tree hollow, mother raccoon appears and displays just how compact the space is,’ Mr Biskaborn said. 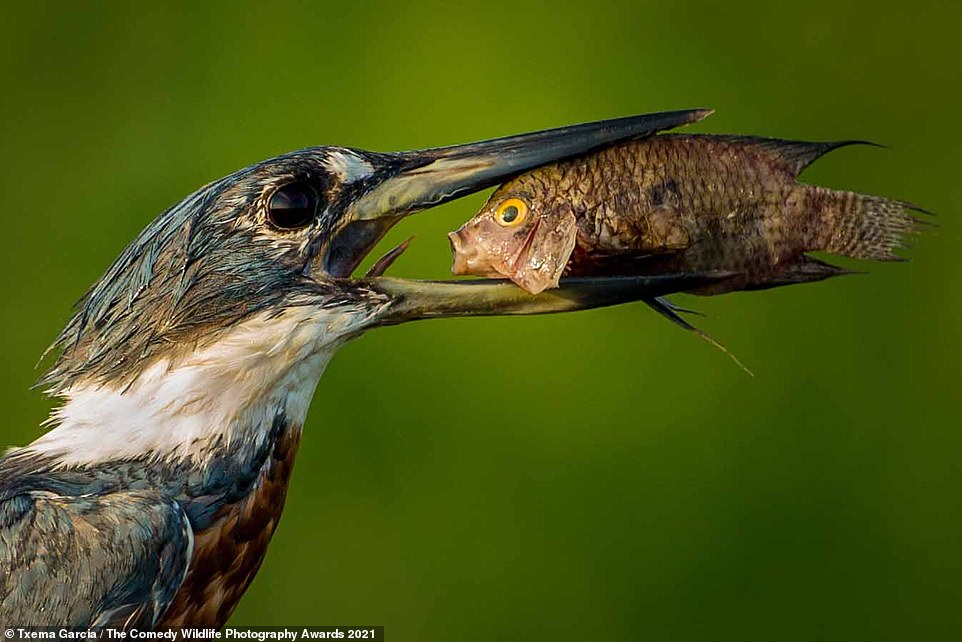 ‘The babies clambered all over their mom and each another, struggling to take a look at the exact same time. This photo was taken in Southwestern Ontario, Canada.

‘I stumbled across this family and immediately worked on leveling the camera with the hole to prevent an upward angle. When the camera and tripod were ready, the baby raccoons were extremely curious (and cooperative), sticking their heads out for a closer look.’ 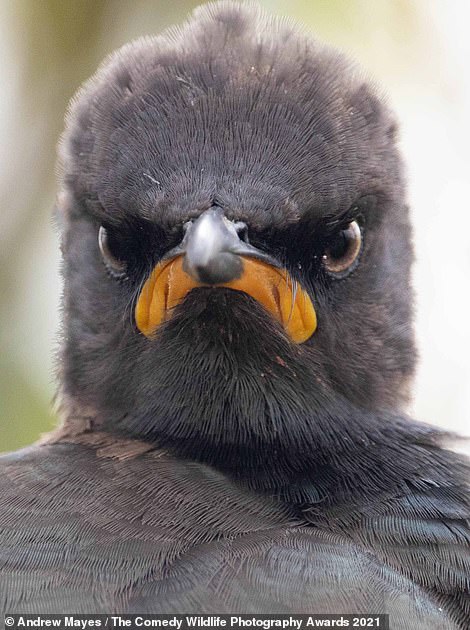 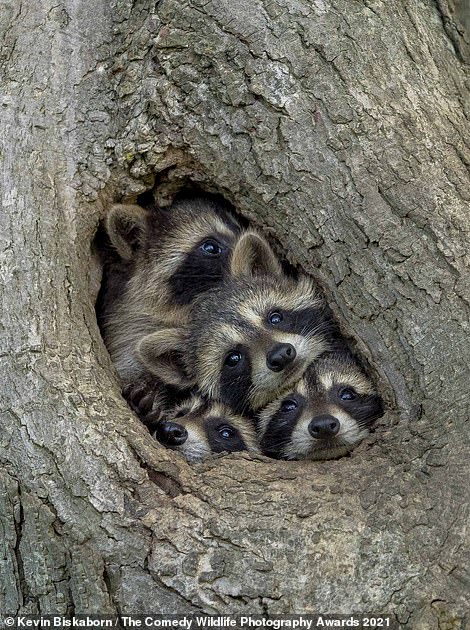 In the image on the left a moody looking Pied Starling was photographed by Andrew Mayes in South Africa, and right a family of racoons are squashed into a tree in Canada

‘Last year, our winning picture of a grumpy-looking turtle swearing at the camera took the world by storm. People love to see these beautiful creatures in these silly situations – it reminds us that we’re not too dissimilar.’