VAN HORN, Texas — Jeff Bezos, the richest human in the world, went to space on Tuesday. It was a brief jaunt — rising more than 65 miles into the sky above West Texas — in a spacecraft that was built by Mr. Bezos’ rocket company, Blue Origin.

“Best day ever,” Mr. Bezos exclaimed once the capsule had settled in the dust near the launch site.

The flight, even though it did not enter orbit, was a milestone for the company that Mr. Bezos, the founder of Amazon, started more than 20 years ago, the first time a Blue Origin vehicle carried people to space.

That Mr. Bezos himself was seated in the capsule reflects his enthusiasm for the endeavor and perhaps signals his intent to give Blue Origin the focus and creative entrepreneurship that made Amazon one of the most powerful economic forces on the planet. But the short duration of the trip also highlighted the company’s sluggish pace of progress and how far Mr. Bezos is from capturing a significant slice of the emerging space economy, let alone fulfilling his vision of enormous numbers of people living and working in space.

On Tuesday, however, the launch went smoothly, as planned.

At 8:11 a.m. Central time, the stubby rocket and capsule, named New Shepard after Alan Shepard, the first American in space, rose from the company’s launch site in Van Horn, a thin jet of fire and exhaust streaming from the rocket’s engine.

Over the past six years, Blue Origin has conducted 15 successful test flights without people aboard, and engineers deemed that New Shepard was finally ready for passengers — their boss included.

The other three passengers were Mr. Bezos’ brother, Mark; Oliver Daemen, a Dutch student who was Blue Origin’s first paying passenger; and Mary Wallace Funk, a pilot who in the 1960s was among a group of women who passed the same rigorous astronaut selection criteria employed by NASA but who, until Tuesday, never had the chance to board a rocket. 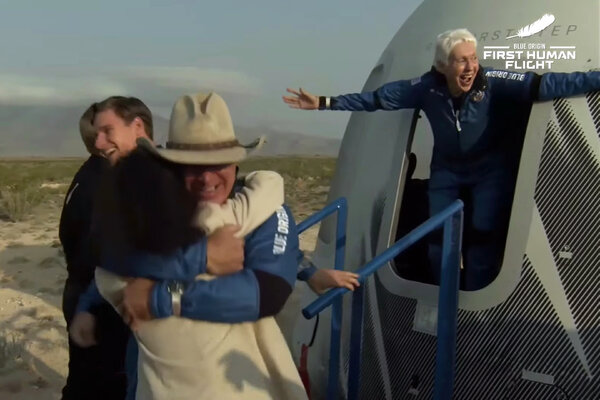 Once the booster had used up its propellant, the capsule detached from the rocket at an altitude of about 47 miles. Both pieces continued to coast upward to 66.5 miles, passing the 62-mile boundary often considered to be the beginning of outer space.

Mr. Bezos and the passengers unbuckled and floated around the capsule, experiencing about four minutes of free fall.

The booster landed vertically, similar to the reusable Falcon 9 booster of the rival spaceflight company SpaceX. The capsule then descended under parachutes until it gently set down in a puff of dust.

Ten minutes and 10 seconds after launch, it was over. A few minutes later, the four emerged euphorically from the capsule.

The Amazon founder’s short trip was the end of one stage of a journey that began decades ago.

But that passion long took a back seat to his early business ventures. Mr. Bezos, now 57, first worked on Wall Street and then started Amazon in 1994. Six years later he founded Blue Origin. But building Amazon — his “day job,” as he once called it — consumed the vast majority of his time, as he transformed it into one of the most powerful and feared retail forces ever.

In recent years, he would typically spend a day a week — usually Wednesdays — focused on Blue Origin, and in 2017 he announced that he would sell $1 billion of Amazon stock a year to fund the space venture.

In 2018, he surpassed Bill Gates to become the wealthiest person in the world. Exploring space rose to the top of his spending list.

“The only way that I can see to deploy this much financial resource is by converting my Amazon winnings into space travel,” he said, couching his investment as a form of philanthropy.

Mr. Bezos has described a vision that is influenced by the proposals of Gerard K. O’Neill, a Princeton physicist who in the 1970s proposed giant cylinder-shape space colonies that in great enough numbers would support far more people and industry than is possible on Earth.

By contrast, Elon Musk, the founder of SpaceX, has focused on the idea of settling Mars. Getting to Mars is an easier task than building one of O’Neill’s colonies, but making cold and airless Mars hospitable to human civilization would be an enormous undertaking.

Andy Jassy, one of Mr. Bezos’ top deputies, took over as Amazon chief executive early this month, and Mr. Bezos said he wanted to focus more on Blue Origin and his other ventures.

“I’ve never had more energy, and this isn’t about retiring,” he told Amazon employees. “I’m super passionate about the impact I think these organizations can have.”

To have such a powerful impact, Blue Origin will need much more than the small New Shepard vehicle.

In the short run, Blue Origin’s competition is Virgin Galactic, the space tourism company started by Richard Branson. When Mr. Branson made a similar suborbital trip last week, it was simple to highlight that Mr. Branson had beaten Mr. Bezos to space.

For the first flight, Blue Origin auctioned off one of the seats with the proceeds going to Mr. Bezos’ space-focused nonprofit, Club for the Future. The winning bid was $28 million, an amount that stunned even Blue Origin officials.

The 7,600 people who participated in the auction provided Blue Origin with a list of prospective paying customers, and the company has started selling tickets to some of them.

When the auction winner, who remains anonymous, decided to skip the first flight and take the ride later, Blue Origin contacted Mr. Daemen, one of the people who had a ticket for the second flight.

Blue Origin has declined to say what the price is or how many people have signed up, but a spokesman says there is a strong demand.

Yet Mr. Bezos has always had ambitions much grander than space tourism. And Blue Origin’s accomplishments pale next to the rocket company led by another of the world’s richest people: SpaceX, which Mr. Musk founded a couple of years after Blue Origin started.

SpaceX is already a behemoth in the space business. It regularly takes NASA astronauts and cargo to the International Space Station, it has already deployed more than 1,500 satellites in its Starlink constellation to provide internet service everywhere, and it is developing a gargantuan rocket called Starship for missions for Mars and elsewhere.

Blue Origin’s projects do not seem poised to upend the space industry the way SpaceX has.

New Glenn, a larger reusable rocket for launching satellites, is still more than a year away, and efforts to win major government contracts like launching Department of Defense satellites have so far come up empty. A lunar lander that Blue Origin hopes NASA will someday use to carry astronauts was not selected, at least for the moment, because NASA said it had money for only one design — SpaceX’s.

Blue Origin’s mascot is the tortoise. As in the fable “The Tortoise and the Hare,” perhaps with steady, constant effort, Blue Origin can catch up.

Lori Garver, deputy administrator of NASA during the Obama administration, recalled Mr. Bezos going to Washington to meet with her and Charles Bolden, the administrator. At the time, Blue Origin was an enigma.

“We were thrilled to hear of his plan,” Ms. Garver said. “It was: ‘I’m here because I’m investing in a space company. I am prepared to invest a lot over the long term. And my goals are very aligned with NASA. So if I can be of help in any way, let’s work together.’”

Blue Origin was working on a capsule that could carry astronauts to the International Space Station, and it won a modest $25.6 million development contract from NASA. But work on that vehicle stalled, and Blue Origin dropped out of the competition for the contracts that ultimately went to Boeing and SpaceX.

“Slow and steady was slower than anybody hoped,” Ms. Garver said.

But the comparisons to SpaceX’s extraordinary successes are somewhat unfair, she said.

At any other time during her career, if a well-financed company like Blue Origin had appeared with its aim of building economical, reusable rockets and spacecraft, “we would have all been blown away,” she said.

Even if Blue Origin has not yet lived up to its lofty vision, more companies will mean more competition. “I’m not really as disappointed as some people at their pace,” Ms. Garver said. “I feel they’ll get there. We need competition.”

Laura Seward Forczyk, founder of the aerospace consulting firm Astralytical, was also positive. “Although their progress has been slow, they haven’t had any large failures that indicate to me that they’re at risk,” she said in. “Blue Origin is still finding its way forward.”

Perhaps, Blue Origin may turn out merely to be a successful, profitable aerospace company more like Northrop Grumman or United Launch Alliance. “They don’t need to become like SpaceX to achieve their goals,” Ms. Forczyk said.

Whatever Blue Origin’s future will be, at the end of Tuesday’s flight, Mr. Bezos was pleased.

“You’ve got a very happy group of people in this capsule,” he said to ground control.

blue origin, Jeff Bezos, P, Space
You may also like: