Blue Origin, the rocket company founded by Jeff Bezos, will launch a rocket into space with passengers on board for the first time in July, the company said on Wednesday.

One seat on the flight, which will carry six astronauts on a short jaunt to the edge of outer space, is up for auction.

The first astronaut flight of New Shepard, a suborbital spacecraft, is scheduled for July 20, the 52nd anniversary of the Apollo 11 moon landing.

Mr. Bezos, the founder of Amazon.com, also started Blue Origin in 2000. Like other billionaires who have invested in spaceflight, he has stated broad goals for humanity’s expansion around the solar system, imagining millions of people eventually living and working in space.

For now, most of Blue Origin’s business has stayed closer to Earth. It builds and sells rocket engines to another rocket company, United Launch Alliance. A rocket that would lift cargo to orbit is not expected to be ready for years, and the company recently lost a competition with SpaceX for a contract to build a moon lander for NASA’s astronauts (it has protested the award). Customers have also paid to fly science experiments for NASA and private scientists during test flights of the New Shepard spacecraft.

It has been preparing for years for the start of its space tourism program, which would offer suborbital trips to what is considered the boundary of outer space, 62 miles above Earth. A competitor, Richard Branson’s Virgin Galactic, also plans to fly space tourists on suborbital jaunts. Virgin Galactic’s space plane, known as SpaceShipTwo, is flown by two pilots, so it has carried people to space on test flights, but no paying passengers yet.

Blue Origin’s tourist rocket is named after Alan Shepard, the first American to go to space. It has undergone 15 test flights, none of which had passengers aboard. Ahead of the latest test, in April, a crew rehearsed boarding and exiting the capsule.

For July’s crewed launch, astronauts will arrive to the launch site in West Texas four days before their flight for safety training, Ms. Cornell said.

At about 47 miles, or 250,000 feet, the capsule carrying the passengers will separate from its booster. Soon after, the astronauts will get to unbuckle and experience weightlessness for about three minutes before returning to earth, Ms. Cornell said. The vehicle is fully pressurized, so passengers won’t need to wear spacesuits or helmets.

Ms. Cornell declined to comment on the other passengers who would be aboard the July 20 flight. The bidding for the sixth seat, which began on Wednesday, will conclude with a live auction on June 12. 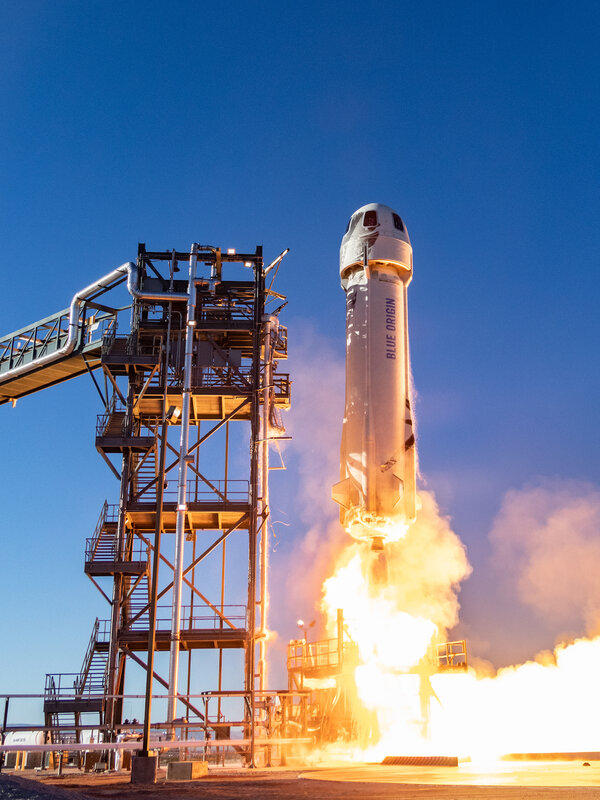 According to the terms of agreement for the auction listed on Blue Origin’s website, the winning bidder must have a height and weight from five feet tall and 110 pounds to 6-foot-four and 223 pounds.

The astronaut must also be comfortable with walking at heights above 70 feet above ground level on the gangway, be able to climb the launch tower — equivalent to seven flights of stairs — in less than 90 seconds and be able to fasten his or her own harness in less than 15 seconds.

The astronaut must also be comfortable with lots of pressure pressing down on him or her for several minutes during both the ascent and descent.

Proceeds from the winning bid will be donated to Club for the Future, a science and technology education foundation affiliated with Blue Origin, Ms. Cornell said.

Ms. Cornell declined to comment on potential pricing for regular tickets, and when they might go on sale for the general public. But she said there would be “a couple more crewed flights before the end of the year.”

She also declined to answer whether Mr. Bezos would be on the first flight and did not say if and when he would go to space.

blue origin, Private spa, rocket
You may also like: