Bigger gorillas make deeper noises when they beat their chest

Say it with your chest! Male gorillas beat their chests to show females how large and fearsome they are – with bigger apes producing lower frequency sounds that can be heard a MILE away, study reveals

Silverback gorillas stand up and beat their chest as a form of communication, a study has found.

Analysis of wild male mountain gorillas in Rwanda reveals a male’s drumming noise conveys how big they are and also their identity.

German researchers found larger gorillas make a deeper noise when smacking their chest than their smaller peers and each individual’s thwacking pattern is unique.

It is thought that when silverbacks hit their muscular torsos they are broadcasting their dominance and size to rival males while simultaneously trying to impress females who may be potential mates. 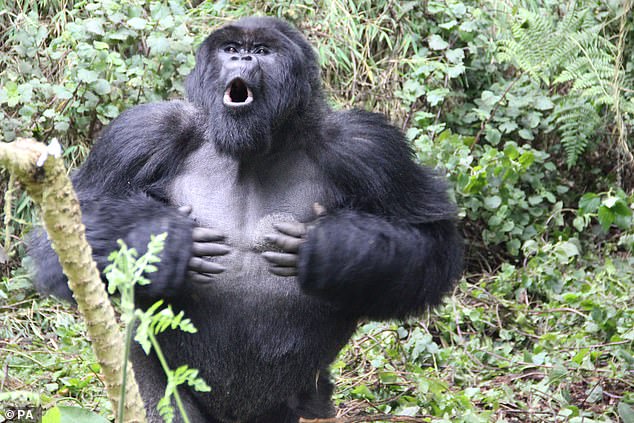 The researchers studied video taken by the Dian Fossey Gorilla Fund of 25 males living in Volcanoes National Park, Rwanda and calculated their body size by measuring the distance between their shoulder blades.

For each gorilla, the number of beats and beat rate was recorded, as well as the animal’s stature and age.

Six males were also audio recorded, capturing a total of 36 chest beats as well as the duration of the beating, number of hits and the frequency of the produced noise.

The audio recordings revealed a correlation between frequency and gorilla body size — bigger males made a deeper sound.

‘The gorilla chest beat is one of those iconic sounds from the animal kingdom, so it is great that we have been able to show that body size is encoded in these spectacular displays,’ said Edward Wright, first author of the study from the Max Planck Institute for Evolutionary Anthropology in Leipzig.

Gorilla chest beats are not voicaliations, but are considered to be a form of gestural communications which can be both seen and heard.

The drumming noise as a burley silverback bangs its fists on its chest can be heard from more than one kilometre away.

The researchers believe the lower frequency sounds are created by bigger animals because they have bigger air sacs around their voice box which amplify the sound.

Variations in the duration and number of chest beats were also observed from the visual recordings, but these are not related to body size, the researchers say.

Instead, the team believes the variations in number of beats, beat rate and total duration may allow individual gorillas to be identified, acting as an audio signature.

This would help gorillas identify one another across the dense forests in which they live, researchers speculate.

Mr Wright said: ‘This hints at the possibility that chest beats may have individual signatures, but further study is needed to test this.’

The researchers believe that chest beating may also help in assessing the fighting ability of rivals.

They said that female gorillas, on the other hand, are likely to use the information to find potential mates.

The findings are published in the journal Scientific Reports.

Mountain gorillas limit the number of their strong social links

Gorillas that live in small social groups have more high quality relationships than those which exist in oversized packs.

It is believed the smaller number of individuals allows them to spend more time with each other, developing stronger bonds.

However, in much larger groups, it can be mentally exhausting to try and maintain good relationships with lots of other individuals.

As a result, gorillas in large groups have only a few very strong relationships and lots of ‘weak’ bonds.

Usually mountain gorillas live in groups of between 12 and 20, and the study found this size is ideal and produces the richest range of relationships.

In smaller or larger groups – sometimes up to 65 gorillas – this diversity dwindles.

bigger, Deeper, gorillas, Make, No
You may also like: