Drones could be future in delivering organs to transplant patients

The pandemic has highlighted the need for alternative methods of travel when it comes to delivering vital organs.

In partnership with aerospace company Boeing, the U.S. Navy has successfully carried out aerial refueling using an unmanned aircraft for the first time.

The service branch said Monday that the unprecedented MQ-25 program achievement was conducted on June 4 from MidAmerica Airport in Mascoutah, Illinois.

Fuel was then transferred from the test asset drone from its Navy-issued Aerial Refueling Store (ARS) to the fighter jet.

The maneuver required as little as 20 feet of separation between the drone and F/1-18 aircraft.

The Navy said the progress showed that MQ-25 could fulfill its tanker mission using the Navy-standard “probe-and-drogue” aerial refueling method.

Now, the Unmanned Aviation and Strike Weapons Program will continue testing the drone to include facets like flight envelope expansion, engine testing and deck handling demonstrations aboard an aircraft.

Test flight data is set to be analyzed to determine whether any adjustments are necessary. 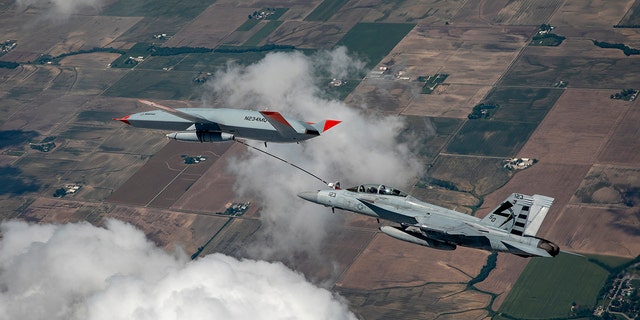 The Boeing MQ-25 T1 test asset transfers fuel to a U.S. Navy F/A-18 Super Hornet on June 4, marking the first time in history that an unmanned aircraft has refueled another aircraft. The MQ-25 Stingray will assume the carrier-based tanking role currently performed by F/A-18s, allowing for better use of the combat strike fighters and helping extend the range of the carrier air wing. (Photo by Kevin Flynn)

“This history-making event is a credit to our joint Boeing and Navy team that is all-in on delivering MQ-25’s critical aerial refueling capability to the fleet as soon as possible,” Leanne Caret, president and CEO of Boeing Defense, Space & Security, said in a statement. “Their work is the driving force behind the safe and secure integration of unmanned systems in the immediate future of defense operations.”

Boeing, drone, figh, navy, refuels
You may also like: