Forget diets! Brain training app’s junk food game can help you to eat less and lose weight by teaching you to tap on images of healthy foods

Losing weight is something that many of us struggle with, but the days of turning to fad diets to drop the pounds could finally be a thing of the past.

Scientists have developed a junk food game within a brain-training app that they say can help you to eat less and lose weight.

The app, called The Food Trainer (FoodT app), trains you to tap on images of healthy foods, but stop tapping when you see unhealthy snacks on-screen.

According to its developers, this creates an association between junk foods and ‘an inhibited response’, helping avoid unhealthy options in real world scenarios.

Dr Matthias Aulbach, of the University of Helsinki, said: ‘For anyone with unhealthy eating habits – perhaps developed during lockdown – FoodT might be helpful.’ 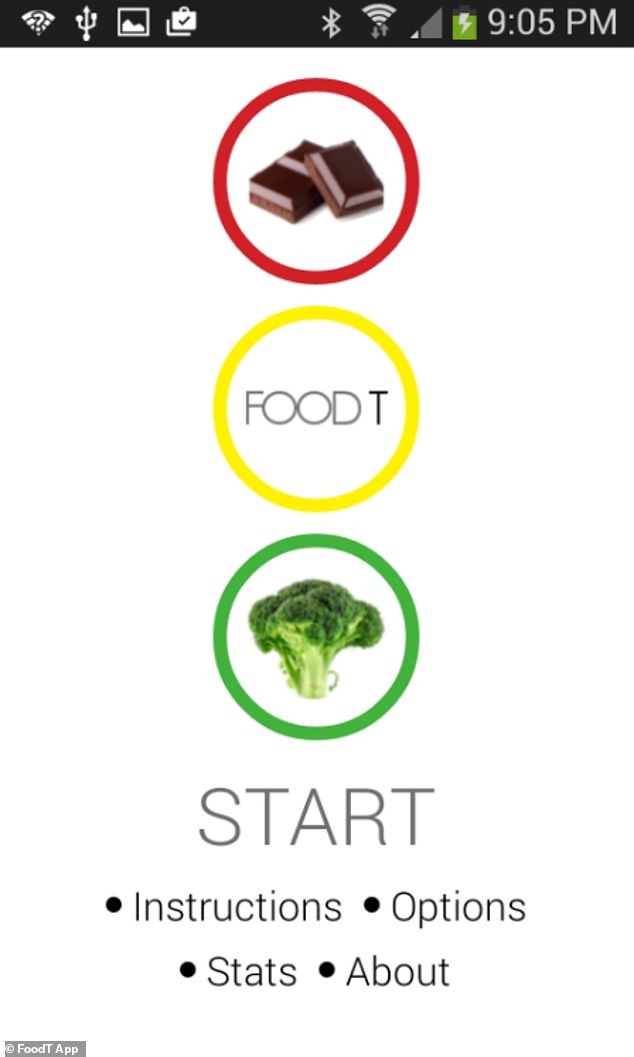 The app, called The Food Trainer (FoodT app), trains you to tap on images of healthy foods, but stop when you see unhealthy snacks

FoodTrainer (FoodT) is a simple computer game that trains your brain to stop to certain unhealthy foods or drinks.

Repeatedly playing this game builds up associations between certain foods (such as chocolate) and stopping, effectively putting the brakes on your eating behaviour.

University of Exeter research suggests that playing this game reduces cravings for foods like chocolate, making them easier to resist and reducing how much is eaten.

In a new study, researchers from the universities of Exeter and Helsinki assessed the impact of the app on 1,234 participants’ junk food consumption.

They found that playing the game once a day for a month led to an average one-point reduction of junk food consumption on an eight-point scale.

However, people who played the game more often reported even larger changes in their food intake.

Across all participants, there was an average weight loss of half a kilogram (just over a pound) and a small increase in healthy food eaten.

Professor Ntalia Lawrence, a researcher on the study, said: ‘As an example, someone who ate each junk food two to four times a week reduced this to once a week after using the app regularly for a month.

‘Overall, the findings are really encouraging. The app is free and it only takes about four minutes per day – so it’s something people realistically can do – and our results suggest it is effective.

‘There’s some evidence that the benefits were stronger for people who were more overweight. 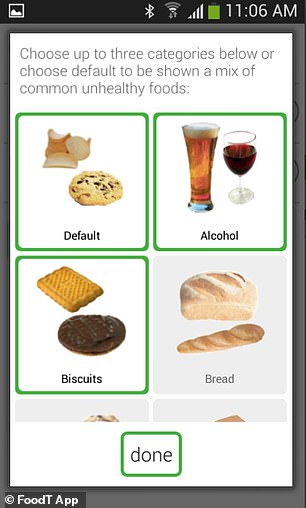 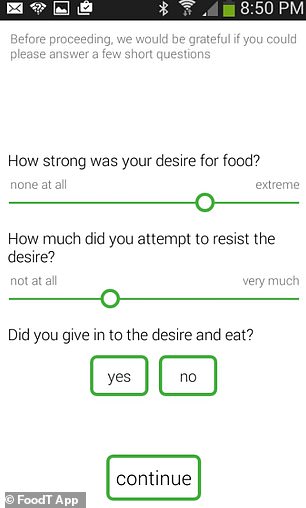 The app, called The Food Trainer (FoodT app), trains you to tap on images of healthy foods, but stop when you see unhealthy snacks

‘We would expect to see this, because the app targets mechanisms that lead people to become overweight, such as the strong urges to approach and consume tempting junk foods.’

The game asks users to choose three types of food or drink they want to consume less of.

The app also periodically asks questions about how often you eat certain foods, along with other information including your age and weight.

‘If you’re trying to teach the brain something new, it’s a good idea to space out the learning over multiple sessions,’ said Dr Aulbach.

‘It may be helpful to do the training in different contexts – not just at home but at work and elsewhere, so the associations you learn don’t just relate to one location.

‘From our results it seems important that you do the training regularly and don’t just stop.

‘So keep it interesting and relevant for yourself so you won’t get bored with it: personalise the app as far as possible and pick the foods that you find really hard to resist.’

The study has been published in the journal Appetite.

In 2020, researchers observed a difference in weight loss between the sexes even when they stick to same amount of calories.

Men found it easier to lose weight than women, they revealed.

The findings came from The Direct Trial, a project led by Newcastle and Glasgow universities involving almost 300 men and women with type 2 diabetes.

They were put on a low-calorie (850 calories a day) diet to see if this would help them quickly lose 15 kg (about 2 st 3 lb) — a drop in weight it was hoped would reverse their diabetes.

‘Both men and women were on the same amount of calories so there should be no confusion,’ says Dr George Thom, a research dietitian at the University of Glasgow and co-author of the latest research.

The initial results, published in 2017 in The Lancet, found that half of the participants went into remission from type 2 diabetes.

But a new analysis (based on studying participants for another three years, published in the journal Diabetic Medicine) found that despite being asked to stick to virtually identical soups and shakes, there was a marked difference between the sexes.

After a year on the diet, the men had lost, on average, 11 per cent of their body weight. Women, by comparison, lost 8.4 per cent.

And the gap continued. After two years, men lost 8.5 per cent of their body weight and women lost 6.9 per cent. So why might this be?

‘We had asked people to stop all their normal foods and replace them with four formulated shakes or soups a day, so it’s really quite strict, and this ‘black and white’ approach to weight loss may suit men better,’ said Dr Thom.

In other words, they stick to it.

‘That’s possibly because the diet culture targets women from an early age, whereas men are more likely to feel the need to lose weight in middle age, so women are more diet-weary,’ he adds.

Men also typically carry more weight in visceral fat — the invisible fat around vital organs — whereas women typically have more subcutaneous fat (stored under the skin) around their thighs, bottom and hips.

This fat distribution pattern in females tends to be protective against a host of metabolic health problems — a combination of type 2 diabetes, high blood pressure and obesity, according to various studies which have shown that subcutaneous fat is associated with better health.

On the other hand, the visceral fat seen in men leaves them at greater risk, particularly from cardiovascular disease.

The result is that when men lose fat, it’s visceral fat, which improves metabolic risk factors leading to a reduced risk of type 2 diabetes, high blood pressure and obesity.

Women who diet are successfully losing subcutaneous fat, but without the same impressive results in either weight loss, the new study suggests, or marked health improvement.

app, brain, can, Game, he, training
You may also like: