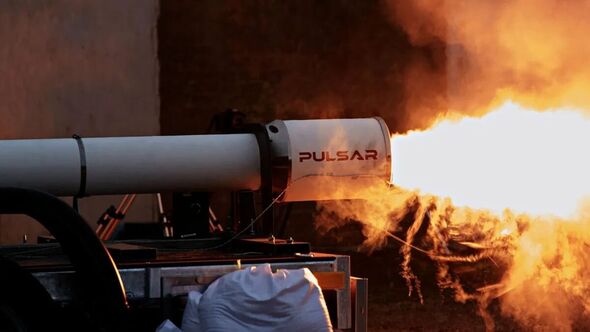 Pulsar-Fusion has already replaced sanction-ridden Russia to produce Europe’s biggest electric-powered spacecraft engine. And last week the Bletchley-based sci-tech firm was awarded a UK Space Agency grant to help it fulfil its ultimate ambition – to develop the world’s first fusion-powered hyperspeed engine with enough power to propel a spacecraft to the edges of the solar system by 2027.

The project is being supported by Southampton and Cambridge Universities and the Rotherham-based Nuclear Advanced Manufacturing Research Centre.

For Pulsar-Fusion’s founder, physicist Richard Dinan, the stakes could not be higher.

Not only would success mean the ability to explore Neptune or the moons of Jupiter, but it could feasibly finally solve the problems associated with using fusion as a sustainable energy source here on earth.

“We have already successfully built and tested the biggest Hall-Effect Thruster in Europe and we’re very proud of this,” said Richard Dinan.

These ion-based thrusters are used by every (Elon Musk-owned) Starlink satellite. Most are built in the US, which regulates them heavily and, while Russia used to export them to Europe, because of sanctions, this has stopped.”

“We believe the fusion industry has missed a trick by not realising that fusion should be used for propulsion first – and this sets us apart.”

“Our reactor design would heat gas to a plasma, a very high temperature, and inject it out the back and use it for propulsion.”

“The kind of reactor is more simple to make and this is exciting because we could build one, see whether it worked and build another without spending tens of billions of dollars.”

“And, since it would also be used to provide energy, you still end up with a viable energy system which can then be applied to earth.”

“It’s all about first getting the technology right.”

Britain has a proud heritage when it comes to nuclear science, and this has ensured its containing membership of both the European Atomic Energy Community (Eurotom) and the EUROfusion programmes after Brexit.

The drive to find an alternative energy source has already resulted in £1bn worth of fusion projects over the last decade, and the Government’s won Fusion Strategy 2020 includes broadening out the pool of potential partners even further.

“The access to space tech exercise we have in this country, both in fusion and fission, is phenomenal and I don’t think people here are aware of just what leadership the UK currently occupies in this sector,” said James Lambert.

“We have managed to capitalise on it and create the most economically productive of all British industries – right now, revenue per person is 50 percent above average in this sector. And this is partly down to world-leading educational institutions such as the University of Southampton. People beat down our doors to be here.”

But too much UK-based investment is predicated on short-term returns and lacks the longer-term vision often found in Silicon Valley, said Lambert.

“Access to private investment is holding us back – that’s where the US has such an advantage, and that’s why we risk losing specialists,” he said.

“In Silicon Valley investors talk to founders and back them, But the difference is that, if it doesn’t work out, they don’t abandon them.

“We need to achieve that level of committed investment here, or scientists will follow the money and will go elsewhere.

“The Government is pulling out all the stops but it can never replace private investment.”