Step away from the smartphone! Britons waste over a half a DAY of their holidays scrolling and sharing snaps online, survey reveals

With the nights drawing in and temperatures dropping by the day in the UK, the idea of packing your bags and heading off on holiday may sound pretty appealing.

But a new survey has revealed that even while we’re away, many of us find it hard to switch off.

Research by travel insurer Staysure found that Britons waste over a half a day of their holidays scrolling on their smartphones and sharing snaps online.

Meanwhile, one in five people admitted they spent up to two hours every day surfing the internet while they’re away. 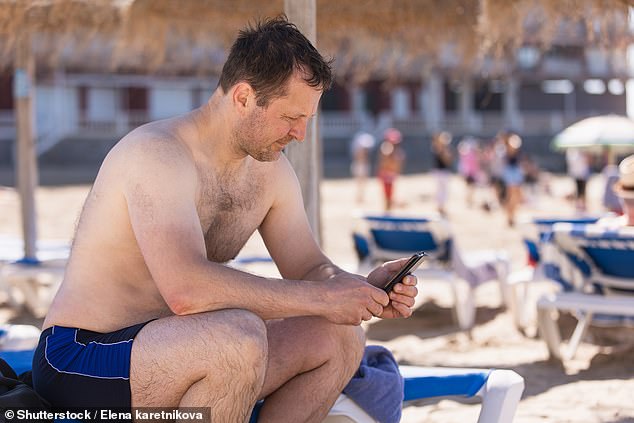 Phubbing is a social exclusion behaviour related to mobile phone use.

The word ‘phubbing’ itself is a portmanteau of the words phone and snubbing.

To phub someone is to ignore them and focus on something on your mobile phone such as texting or social media instead, despite being in their presence.

The term was first coined in 2012 as part of a campaign to stop the practice completely.

The poll of 2,500 people found they spent on average 13 hours online during a fortnight holiday.

Nearly half – 49 per cent – said they did so to boast about their holiday on social media and share pictures.

While over third said they went online to check the weather forecast and compare it to what it was like back home.

The survey revealed men spent the most time on their phones and tablets – 13 per cent more than women.

But it was Generation X that spent the most time online, with one in seven spending up to five hours online.

The main reason for staying online was to stay in touch with family and friends, with 62 per cent citing this as their underlying motivation.

One in nine of us admitted to checking our work emails on holiday though, with men far more likely to do this than women.

Holidaymakers need to be careful however with all big mobile phone companies reintroducing roaming charges when visiting Europe.

Mobile networks in EU countries had previously been banned from charging customers extra to use their phones in member countries.

But several – including EE, Sky Mobile, Three, and Vodafone – have re-added roaming charges after the Brexit deal did not include protection against them.

Ryan Howsam, chief executive of Staysure, said: ‘Modern technology allows us to really stay connected wherever we are in the world, whether that be sharing your holiday pictures on social media or keeping in touch with loved ones back home.

‘With hybrid working now commonplace in many organisations, it doesn’t surprise me that more and more people continue working whilst they’re away.

‘We all depend so much on our phones it’s understandable that we feel the need to check emails while relaxing at the beach or round the pool, but it’s also important to spend quality time with loved ones and switch off from the everyday stresses of work on that well-earned break.’

HOW CAN YOU SPEND LESS TIME ONLINE?

Being ‘on’ all the time can have a serious effect on our mind and our bodies, which is why a world-famous personal trainer and health author has shared his tips on how to do a digital detox.

Adelaide-born PT, James Duigan, 42, is the former personal trainer of Elle Macpherson and his words are often treated as gospel as he has also worked with the likes of Emilia Clarke, Rosie Huntington-Whiteley and Lara Stone.

Although many of us communicate with people online and check into social media, Mr Duigan believes we’ve never been lonelier:

‘The primary culprit is social media and our mobile phones. They can bring global communities together and provide a ceaseless source of inspiration at their best,’ he said.

‘But at their worst, they can be a constant nuisance, a constant distraction and stop you living in the present.

‘Even a quick scroll before bed can keep you awake at night or send your self-esteem plummeting as you’re barraged with Insta bums and impossible abs.’

Mr Duigan explained that social media platforms have been purposefully built to be addictive as each notification brings along the ‘happy hormone’ with it.

In a blog post on his website Bodyism, James revealed what his top three tips for a digital detox are.

As with any cold turkey experience, it can be hard to wean yourself off social media – but the trick is to replace the addiction with something else.

The app allows you to choose how long you want to block certain apps for – which means you can slowly coax yourself into blocking them for longer.

‘Creating that extra step between you and your ‘feed’ will help you resist the lure of mindless scrolling when your resolve is wearing thin,’ he said.

Mr Duigan’s third and final step is to be in the moment and make sure you’re tuned in on what is going on around you.

‘No pictures. No selfies. No boomerangs. No Snapchats. For one day at least. Don’t lose the moment by trying to capture it,’ he said.

‘Live in the moment and it will live long in the memory.’