What’s that sound? Cicadas invade parts of Eastern US

Cicadas have taken over large swaths of the United States, interrupting sleep, causing car crashes and even bombarding President Biden on Wednesday as he prepared to board Air Force One.

Trillions of the insects have emerged after 17 years underground in approximately 15 states, leaving nymph exoskeletons littered around city parks and backyards.

The red-eyed bugs are especially active amid hot weather conditions that have swept the country in past weeks and residents of heavy cicada areas have taken note.

Although cicadas are not dangerous to humans, the bugs have reportedly been the cause of a few disturbances.

A county in Georgia said that residents had been calling 911 over the 100-decibel songs of the cicadas, with reports of “alarms” sounding in the area.

In Ohio, the Cincinnati Police Department said Monday that a young man crashed his car after being hit in the face by a cicada that flew through an open window.

“Remember to keep your windows rolled up until our little red eyed friends are gone,” the department advised in a Facebook post, noting that historically there have been “several car crashes attributed to their presence.” 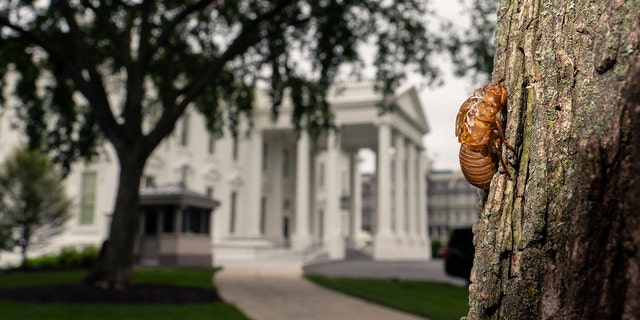 A shell of a Brood X cicada is seen on a tree on the North Lawn of the White House in Washington, Tuesday, May 25, 2021.  Reporters traveling to the United Kingdom ahead of President Joe Biden’s first overseas trip were delayed seven hours after their chartered plane was overrun by cicadas. The Washington, D.C., area is among the many parts of the country confronting the swarm of Brood X, a large emergence of the loud 17-year insects that take to dive-bombing onto moving vehicles and unsuspecting passersby. Weather and crew rest issues also contributed to the flight delay. (AP Photo/Carolyn Kaster)

In Maryland, Virginia and the District of Columbia, masses of cicadas may even be showing up on weather radar.

“You may have noticed a lot of fuzziness (low reflectivity values) on our radar recently. The Hydrometeor Classification algorithm shows much of it to be Biological in nature,” the National Weather Service in Baltimore, Md. and Washington tweeted last weekend. “Our guess? It’s probably the #cicadas.”

However, opinions on whether cicadas are taking flight on or under the radar vary, according to forecaster AccuWeather.

Nevertheless, Brood X has had an impact on air travel, delaying the White House press plane’s takeoff from Washington’s Dulles International Airport to the United Kingdom for hours on Wednesday.

The mayhem won’t last too long.

By July 4, adult cicadas will largely be gone, having successfully reproduced and each laid hundreds of eggs on tree branches.

After the eggs fall to the ground and hatch, the cycle will begin again.

Brood, cicadas, interfere, With, X
You may also like: