Speed limits in urban areas should be slashed to just 20 miles per hour, according to campaigners.

Research carried out by engineering consultants Skyrad revealed it could cut vehicle emissions by up to 28 per cent.

The study, funded by campaign group 20’s Plenty for Us, involved ‘real life’ modelling of urban traffic, taking into account the stop start nature of roads in towns and villages.

The team compared scenarios with a 20 and 30 mile per hour limit, and found carbon dioxide (CO2) emissions were 26 per cent lower in a 20 zone, while nitrogen oxide (NOx) was 28 per cent lower.

Campaigners say the findings clearly show reducing limits in urban and village areas to 20mph will help the UK reach its target of net zero emissions by 2050. 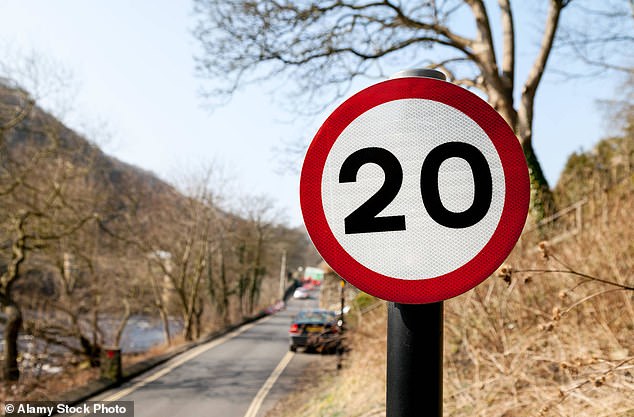 Speed limits in urban areas should be slashed to just 20 miles per hour, according to campaigners, after research revealed it could cut vehicle emissions by 28 per cent 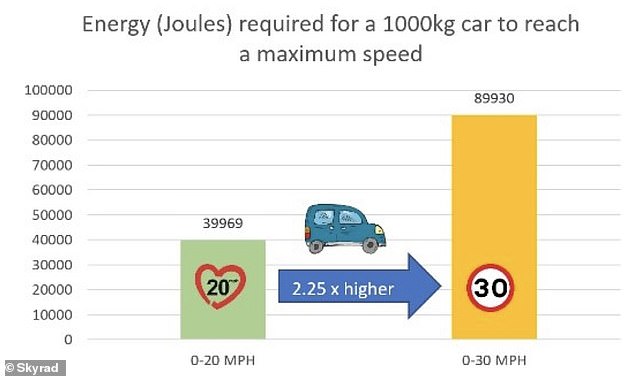 Skyrad researchers found that the energy needed for a car to reach 30mph was 2.25 times higher than for it to reach 20 miles per hour, creating more emissions in the process

WHAT IS THE IMPACT OF SPEED ON EMISSIONS IN STOP START TRAFFIC?

It found that higher peak vehicle speeds – the maximum reached between junctions – adversely affected CO2 and NOx emissions, while having only a small effect on total journey times.

The emissions were dominated by the energy required to accelerate the vehicle in stop-start traffic.

Skyrad modelled the CO2 and NOx emissions for accelerating from stationary to between five and 50 mph for a number of vehicles types and sizes.

Repeated acceleration and braking, rather than steady-state, represents a far better modelling of real-world emissions in congested cities and towns, they said.

It found that for a Ford Focus, going at 20mph will produce about 170g of CO2 per kilometre travelled, whereas at 30mph that goes up to 240g per km travelled.

Researchers discovered that the higher peak vehicle speeds – the maximum reached between junctions – adversely affected CO2 and NOx emissions, while having only a small effect on total journey times.

The emissions were dominated by the energy required to accelerate the vehicle in stop-start traffic, contrasting to many of the accepted models currently used.

Previous models of traffic impact on emissions exclude the effect of stop-start traffic and consider only the ‘cruise’ portion of the journey.

As well as the Ford Focus, the team modelled the impact of a Range Rover Discovery and a Ford Transit van.

‘It is clear that repeated acceleration dominates emissions in town driving,’ said Rod King MBE, Founder and Campaign Director for 20’s Plenty for Us.

‘This research quantifies the effect and shows how reducing maximum speeds can have a significant beneficial effect on emissions.

‘It’s time for all governments to say 20’s Plenty for the planet and for our health. With COP26 approaching it is an effective step towards transport carbon reduction.’

The campaign group says the auto industry is ‘fully aware of the impact of acceleration on vehicle emissions’ but doesn’t publish results.

‘Basic physics means that 2.25 times more energy is required to reach 30mph than 20mph,’ they said, and when repeated in a real-world environment – including slowing at junctions and crossings – it adds to overall vehicle emissions. 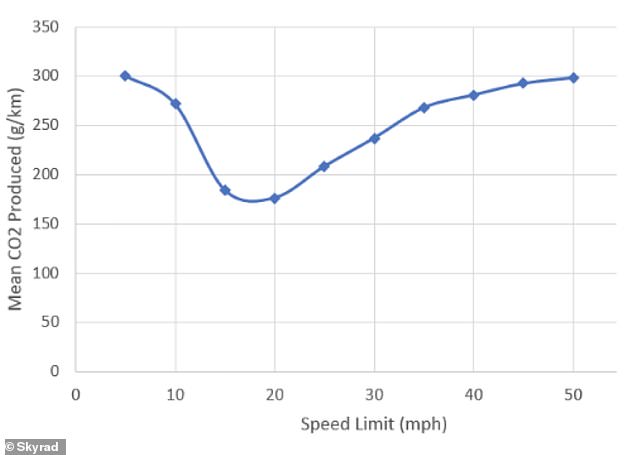 Researchers tracked the mean CO2 produced at various maximum speed limits for the average family car in an urban area. Finding 20mph was the most viable limit 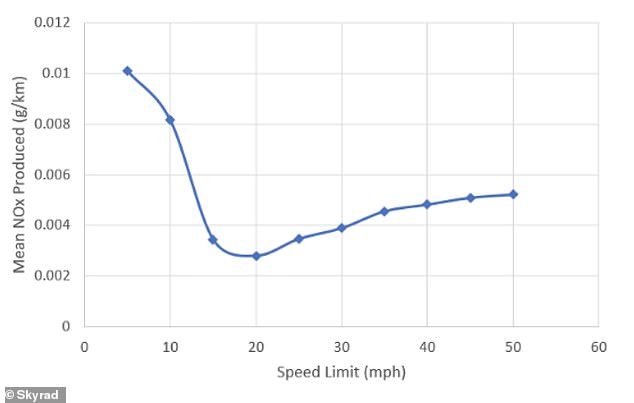 Speed limit reductions are a key initiative to reduce climate-warming CO2 emissions and harmful NOx, the group said, adding they also have a significant effect on public health through air quality improvements and active travel.

Wales is already planning to change the national urban default limit of 30mph to 20mph by 2023.

The Scottish Government has announced its plans to set 20mph as a norm across the country from 2025.

The Department for Transport has been approached for a comment.

call, campaigners, for, lim, speed
You may also like: