Follow
Home » Science » Can YOU stop the squares in this optical illusion from moving?

Can YOU stop the squares in this optical illusion from moving?

Can YOU stop the squares in this optical illusion from moving for 10 seconds?

An image featuring small, connected gray squares appears to move right before your eyes, but the figures on the screen are actually static – you see them as shifting because your brain is being tricked by illusionary motion.

The image challenges viewers to look past the illusion and stop the moving squares for at least 10 seconds, but this seems to be a skill that not everyone can master.

This is because the optical illusion arranges the squares with luminance-based edges that artificially activate motion-detecting neurons in the visual pathways, which leads to our eyes reading the change in light as motion.

This optical illusion, along with others, have long captivated the world, but the deceptive pieces have been part of human history for 20,000 years when prehistoric artists used natural bulges of the rock to add illusory volume and depth in cave drawings of horses and bison. 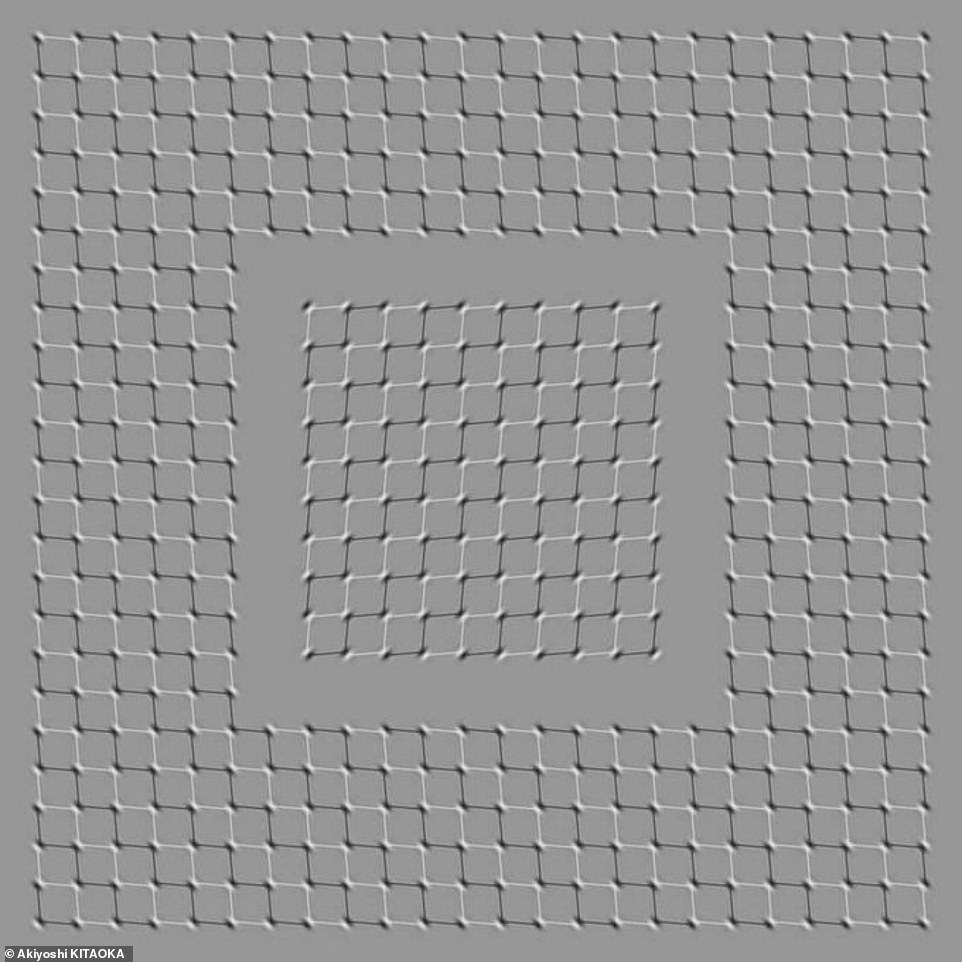 This optical illusion using illusionary motion to trick your brain into thinking the squares are moving. This happens because of the luminesce edges, which your eyes perceive as motion

Professor of psychology at Japan’s Ritsumeikan University Akiyoshi Kitaoka is a known master of optical illusions who has spent more than a decade creating a collection of moving optical illusions.

One of these mind-bending images shows how the brain is tricked into thinking a static black hole is expanding.

In tests conducted by Norway’s University of Oslo’s Department of Psychology, 86 percent of volunteers perceived the central black hole to be expanding, as if moving into a dark environment like a tunnel or falling into a hole.

The image is so good at deceiving our brain that it prompts dilation of the pupils, just as it would happen if we were really moving into a dark area. 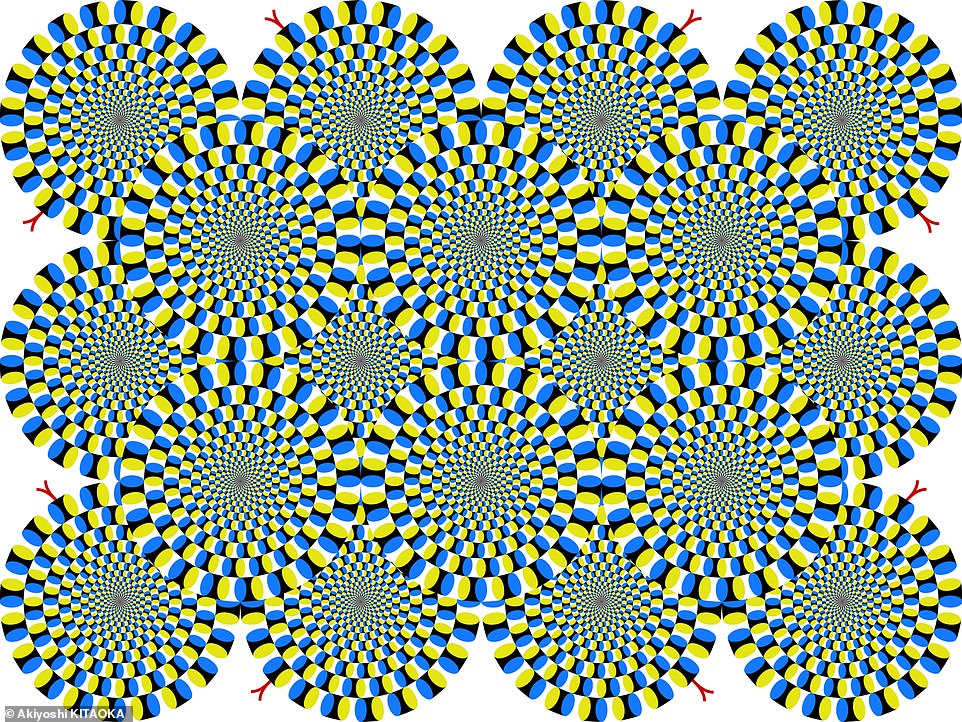 Professor of psychology at Japan’s Ritsumeikan University Akiyoshi Kitaoka is a known master of optical illusions who has spent more than a decade creating a collection of moving optical illusions. Pictured is one of his famous mind-bending images known as ‘Rotating snakes’ 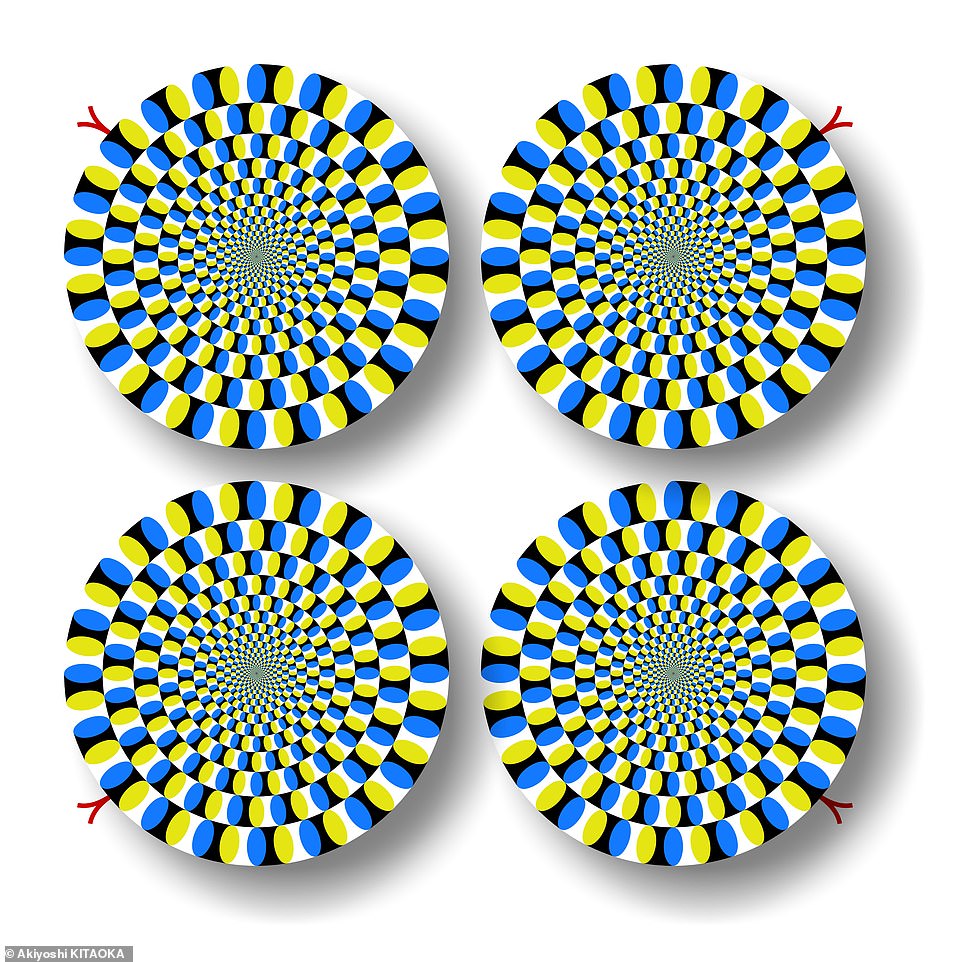 We precieve the circles as moving due to the white spaces in-between the yellow, blue and black shapes 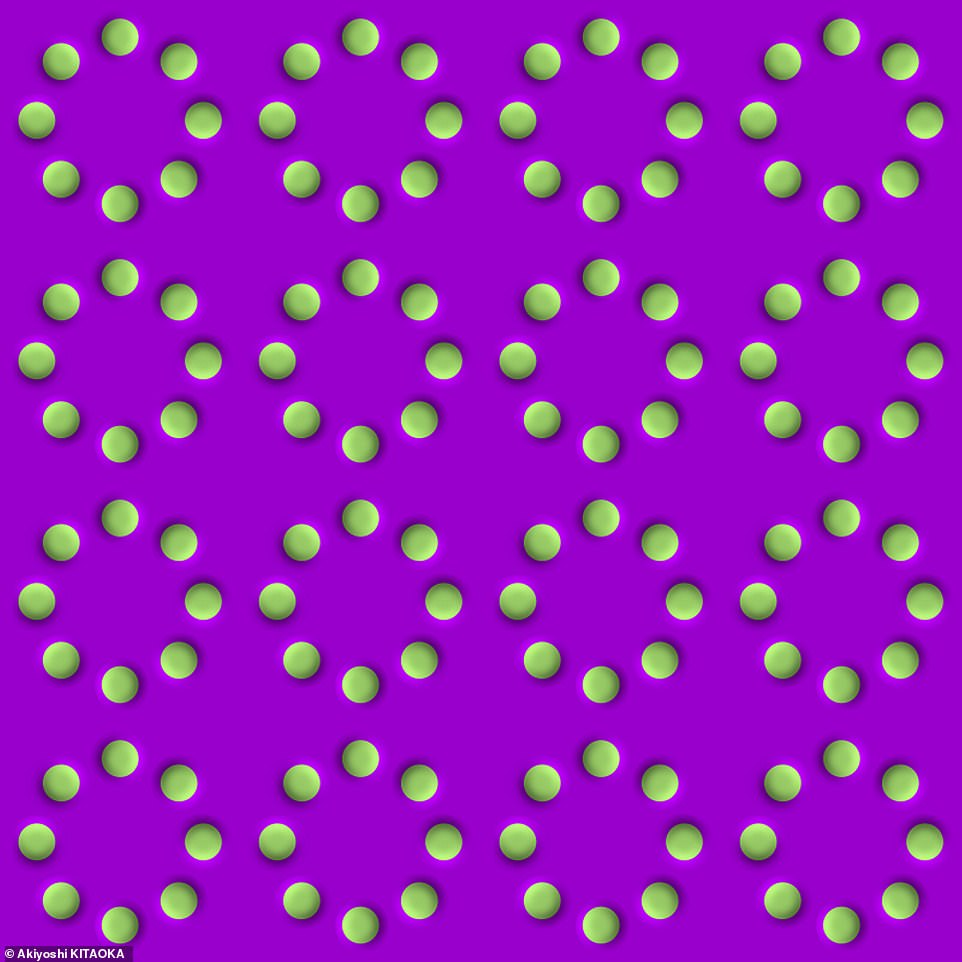 Notice the white luminating the green circles? This is being perceived as motion by your eyes, which is activating motion-detecting neurons in your brain 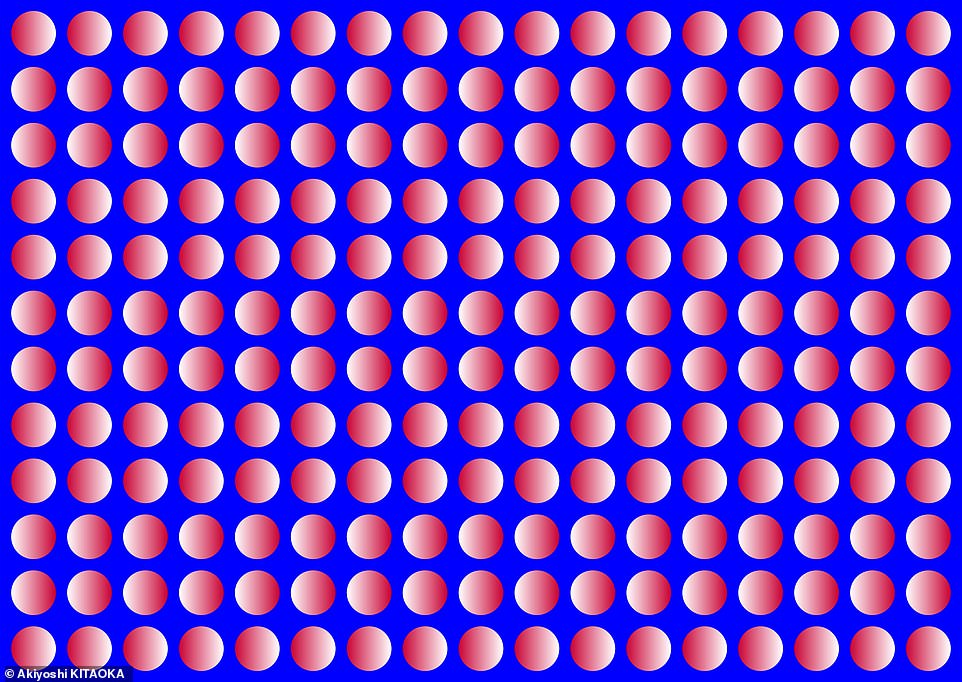 The pink circles may seem to flow in a wave, but this is because their edges are shaded in a white color

Lead study author Bruno Laeng said in a statement: ‘The circular smear or shadow gradient of the central black hole evokes a marked impression of optic flow, as if the observer were heading forward into a hole or tunnel.

The team also looked at Kitaoka’s ‘Asahi’ brightness illusion, which has a central region that looks more luminous than its white background, even though it is the same white everywhere.

To test the effectiveness of the new image, the researchers recruited 50 people with healthy vision who were between the ages of 18 and 41 years.

All volunteers were shown the ‘Asahi’ brightness illusion, as well as several variations of it with different colors, for a few seconds on a computer screen.

An infrared eye tracker recorded constrictions and dilations of the eye pupils as the different images were being presented and each participant was asked to rate subjectively how strongly they perceived the illusion.

As controls for the study, the participants were also shown ‘scrambled’ versions of the expanding hole images, with equal luminance and colors, but without any pattern. 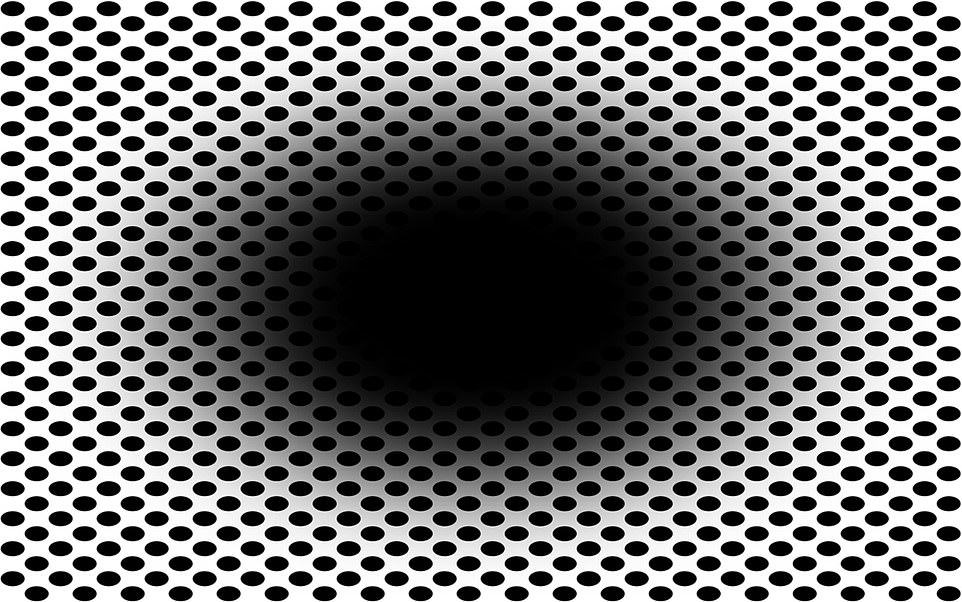 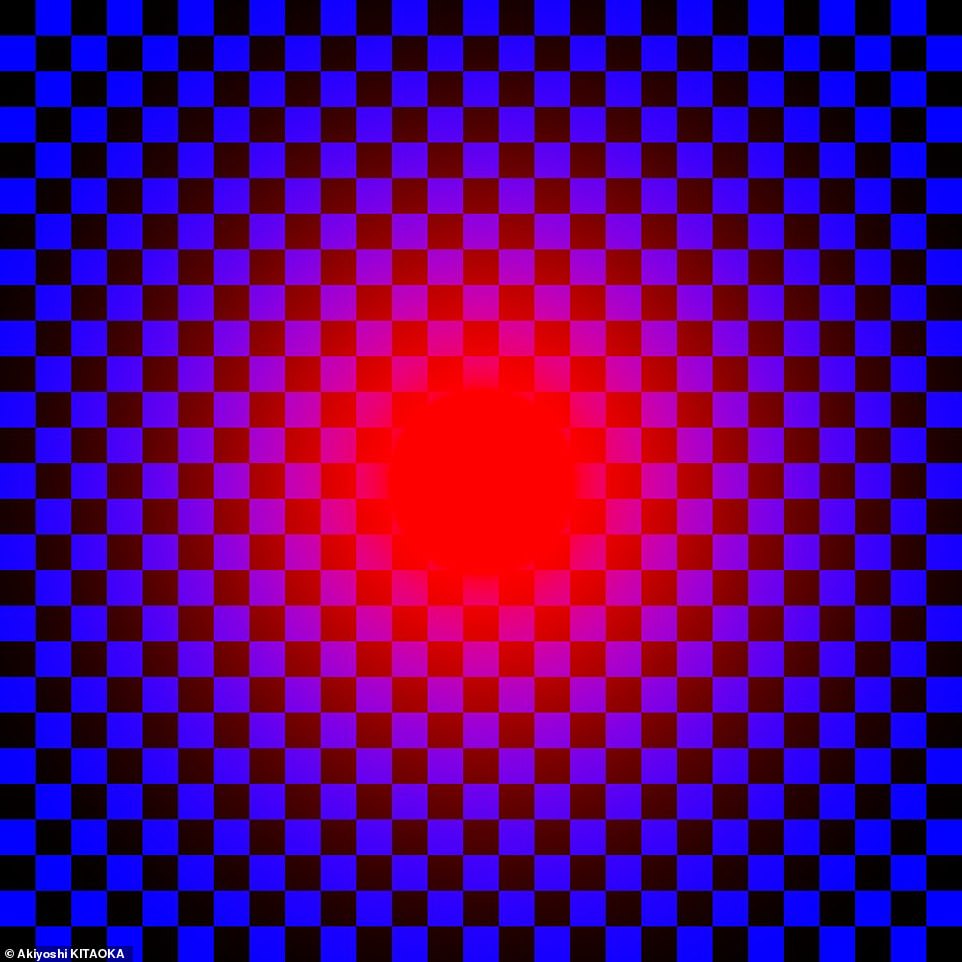 Here is the same optical illusion just designed with different colors. Does the center appear to grow right before your eyes? 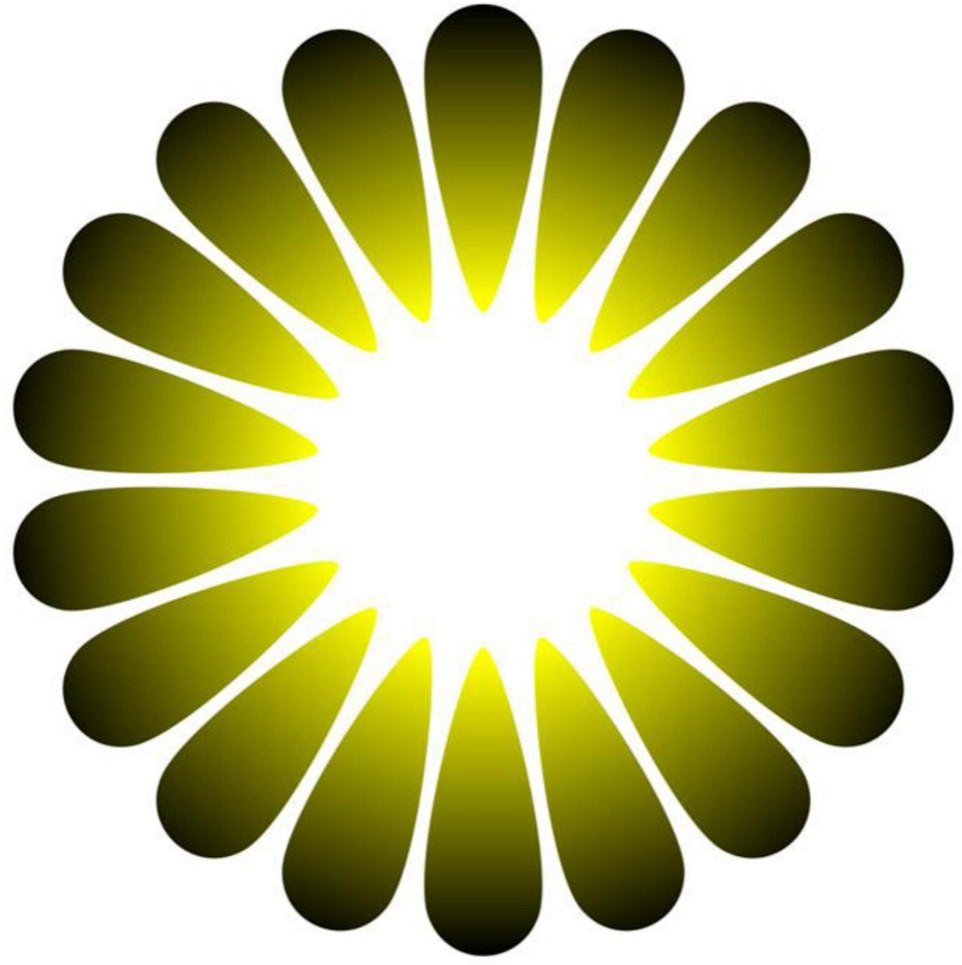 Kitaoka’s ‘Asahi’ brightness illusion has a central region that looks more luminous than its white background, even though it is the same white everywhere 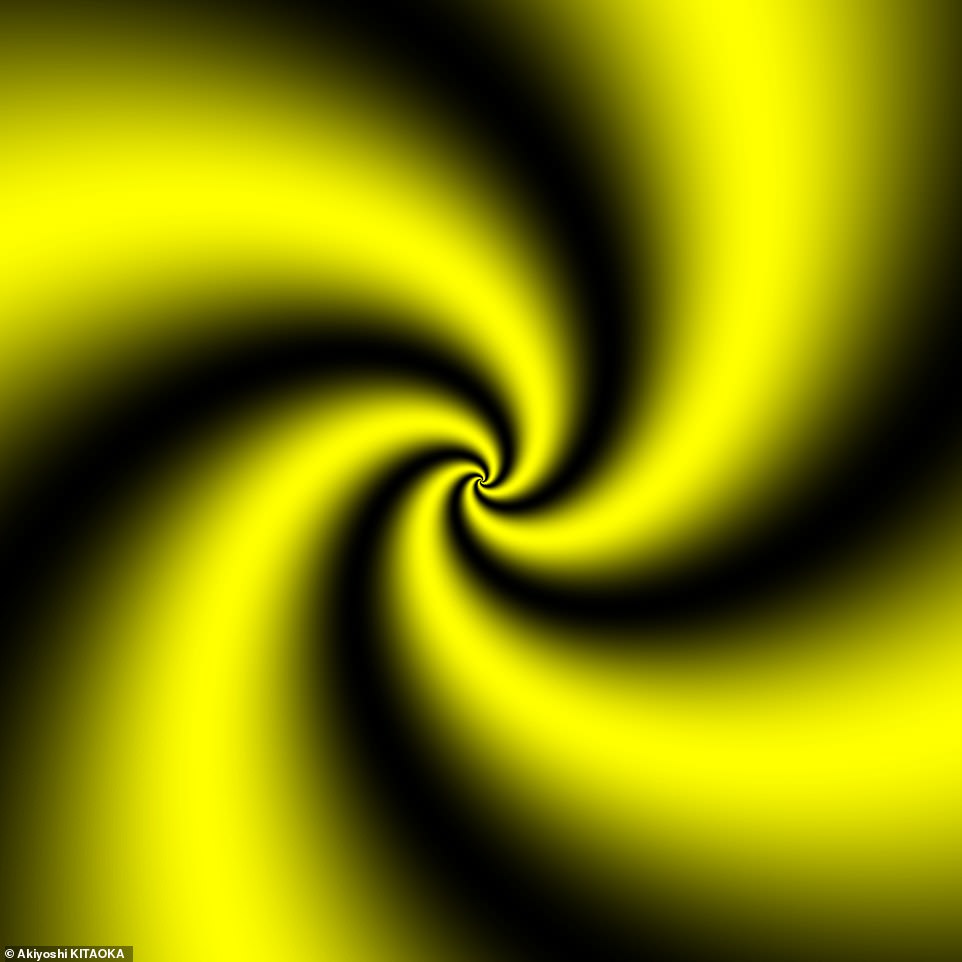 The same cognitive effect happens with this artwork, the yellow seems to get bright toward the center of the swirl. However, it is the same shade throughout

What are optical illusions?

Optical illusions arrange a series of patterns, images and colors or play with the way an object is lit in order to trick our brains into thinking something is there – when it is not.

When light hits our retina, it takes about one-tenth of a second for our brain to translate that signal into perception, reports Discovery News.

Evolutionary neurobiologist Mark Changizi says this neural delay makes our brains generate images of what it thinks the world will look like in one-tenth of a second.

The team found that the illusion was most effective when the hole was black – just 14 percent of participants did not perceive the illusion in this instance.

Meanwhile, a slightly higher percentage did not see the hole if it was in color – 20 percent for all colors, on average.

The study also revealed that black holes promoted strong reflex dilations of the participants’ pupils, while colored holes prompted their pupils to constrict.

Kitaoka has created several that mimic the gray square illusion that seems to be moving around on the screen, but these appear as if the lines are bending.

For example, his regular squares illusions feature rows of black and white squares that appear to lean toward each other in the middle.

The concept was developed by German physicist Hermann Ludwig Ferdinand von Helmholtz in 1886, which states a square appears wider when it is filled with vertical lines and higher when filled with horizontal lines.

One of Kitaoka’s illusions has also been done in a video, where he slides a gray-colored swatch across the gradient, as it mysteriously changes colors right before viewers’ eyes.

Viewers might be inclined to believe that he doctored the video to hide that he used several different-colored swatches.

However, the swatches are all the same color.

There’s also a simple scientific explanation for why the swatch appears to change colors as Kitaoka slides it across the gradient background.

The effect is a result of light perception, or the concept that our eyes perceive colors differently based on the shade of whatever object is in the background or foreground.

Put simply, if there is a bright background, objects in the foreground will appear darker.

Likewise, if the background is dark, objects in the foreground will appear lighter.

Other factors, such as the amount of light reflected by a surface, the orientation of the surface and whether or not it’s 3D can produce similar effects. 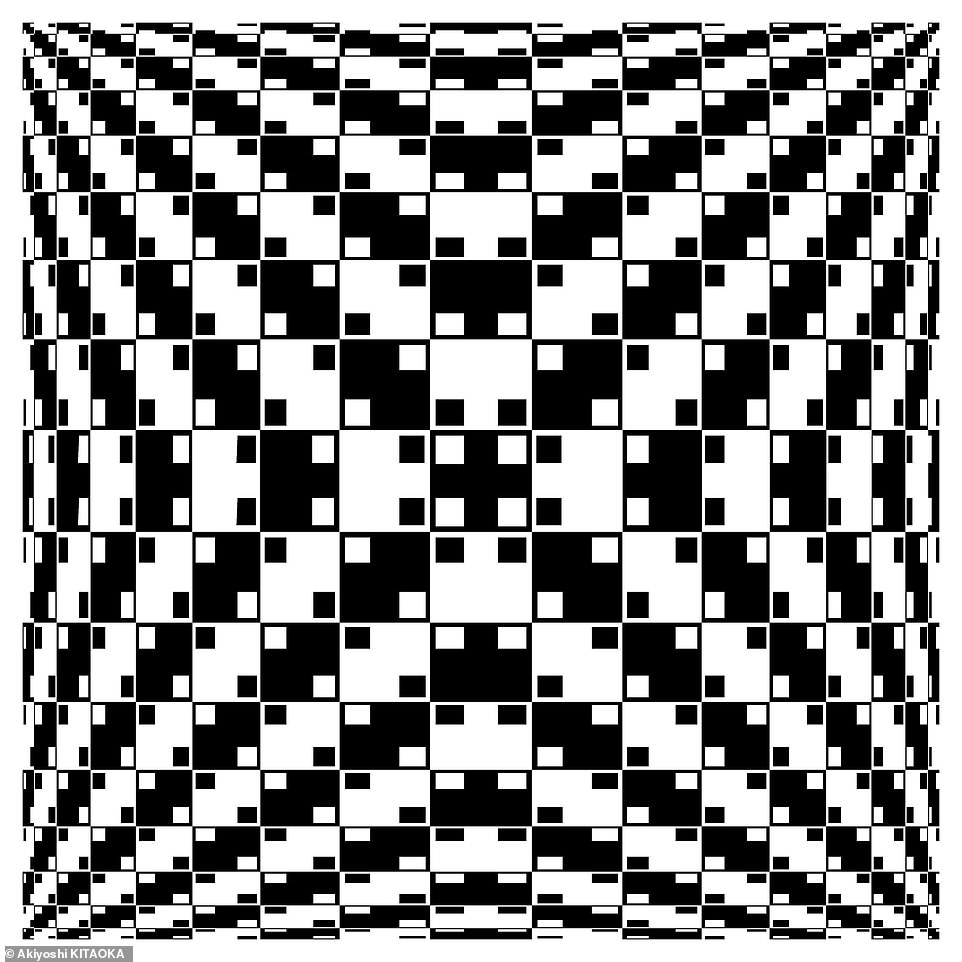 Kitaoka has created several that mimic the gray square illusion that seems to be moving around on the screen, but these appear as if the lines are bending. For example, his regular squares illusions feature rows of black and white squares that appear to lean toward each other in the middle

Two University of Washington professors described this phenomenon in a 2014 research paper.

‘The amount of light reflected by a surface is affected by a combination of factors including the surface’s reflectance properties and illumination conditions.

The latter are not limited by the strength of illuminant but also include the relative placement of the light illuminating the surface, the orientation of the surface and its 3d shape, all of which result in a pattern of luminance gradients across the surface,’ reads the published paper.

Kitaoka replicated the same effect in a few other videos, including one that shows a pair of Mickey Mouse ears sliding across the gradient, instead of squares.

He also demonstrated it on a colored gradient.

Although many believe the prehistoric images found in caves could be optical illusions, it is not know if that is what the artist intended.

However, records provide evidence of purposely made images that date back to ancient Greece during the 5th century BC when philosopher Epicharmus first presented the explanation of this phenomenon.

Epicharmus believed that even if our mind knows and understands everything clearly, the sensory organs deceive us and present an optical illusion.

Another Greek philosopher, Protagoras, who lived around the same time period had a different opinion on this matter.

According to him, it was the environment that fools us and not the senses.