Scottish GROUSE breed in danger of extinction: Number of capercaillie in the country falls to just 542 in wake of cold, wet Spring

Numbers of an iconic member of the grouse family have fallen below 1,000 in Scotland and could plummet further, a new report warns.

Only 542 of the capercaillie, a huge woodland grouse, are estimated to be left in the country, according to the latest national survey led by RSPB Scotland.

Scotland’s population of the bird has dropped around 50 per cent since the last survey six years ago and is now at a critically low level, the survey has found.

Numbers of capercaillie have been declining since the third national survey of 2003/04, but this is the first time since the survey began that the population has dipped below 1,000.

Scotland is the only place in the UK where the capercaillie – the world’s largest grouse – is found. Most are in the Cairngorms National Park in Scotland’s highlands.

The rare bird – which reaches up to 3 feet long and 4.3kg in weight – is known for violent fights between males during breeding season.

Capercaillie became extinct in Scotland in the 1700s, largely due to loss of their woodland habitat, although they were reintroduced from Sweden to Scotland the following century.

But the bird could vanish for a second time due to cold and wet spring weather that affects breeding, as well as hunting and loss of habitat. 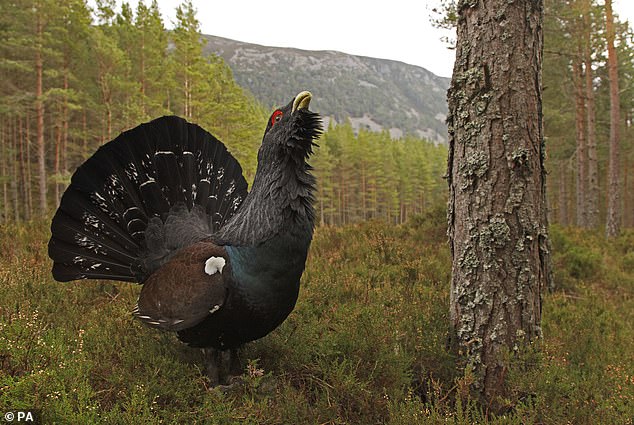 Capercaillie displaying a ‘lek’ in the Cairngorms National Park, Scotland. The ‘iconic’ capercaillie is likely to become extinct again in the UK within two to three decades if the current trend in population decline continues, a report has warned 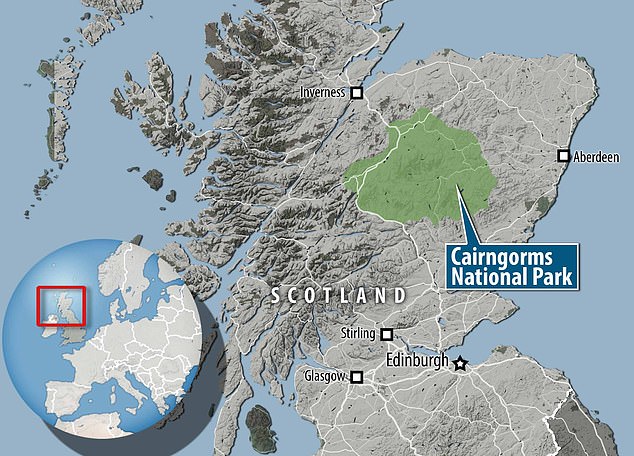 The capercaillie is the largest member of the game bird family. It resides in the pinewoods of Scotland, but is occasionally found in mature oakwoods.

Male capercaillie are mainly grey in colour and have reddish-brown wings with a white patch on the shoulder. The head, neck and breast are tinged with blue, and the eye is highlighted by a ring of red skin.

Males also have a ‘beard’ most noticeable during courtship displays, and a long tail. Females have brown plumage with striations all over the body and a reddish-brown patch on the breast.

The UK capercaillie population has declined so rapidly that it is at very real risk of extinction (for the second time) and is a ‘Red List’ species.

Capercaillie are described as very shy and elusive birds, often perching in trees or hidden away on the forest floor, but during breeding season the males can engage in bloody fights.

Experts are calling on agencies to work together to try to help the birds, which have been hunted down for their meat.

Since a decline in numbers there has been a ban by landowners on shooting capercaillie, although this isn’t reversing the decline.

Scotland’s capercaillie population is surveyed every six years, and this – the sixth survey – was conducted over the winter of 2021/22.

‘This up-to-date estimate of capercaillie numbers reveals just how vulnerable the population in Scotland is,’ said Nick Wilkinson, conservation scientist at RSPB Scotland.

‘Previous surveys have seen numbers fluctuating between around 1,000 and 2,000 birds so it’s really worrying that the results from last winter indicate there are only an estimated 542 individuals remaining now.

‘These results will help focus efforts on where action should be targeted to help capercaillie by identifying their strongholds and where the most impact can be made for them.’

Conservation scientists said the decline is being fuelled by a combination of factors that reduce capercaillie survival and breeding success.

These include cold, wet spring weather which has an impact on the fitness of female birds before the breeding season and affects chick survival. Insect shortages may also cause poor rates of chick survival.

During breeding season, male capercaillie put on a flamboyant display known as a ‘lek’.

With its wings pointed down, tail flared and beard bristling, the male emits a series of gurgles and wheezes interspersed with curious ‘cork popping’ sounds.

If there is more than one male nearby, fights can break out, sometimes causing serious injury and even death.

Females lay between 5 and 12 eggs in a nest on the ground and look after the chicks, without the male, during the summer. These family units then join larger groups of birds in the autumn.

The UK’s Western capercaillie are all in Scotland, mostly in pine forests that have a rich growth of blaeberry, a deciduous species of shrub, on the forest floor.

It is estimated that Cairngorms National Park in the Scottish Highlands has 85 per cent of the total population in Scotland.

Survey partners will be working with the Scottish government to develop a strategy to reverse the decline, with a particular focus on the Cairngorms National Park area.

‘The results from the national survey are deeply concerning and we must all come together to decide what additional, swift actions can be implemented now to halt any further decline,’ said Andy Ford, director of nature and climate change at the Cairngorms National Park Authority.

‘We will continue working closely with all involved to co-ordinate a strategic approach to conservation efforts and, crucially, deliver action on the ground.’

A Scottish government spokesman added: ‘The results of the latest national survey are deeply concerning, despite the efforts made to enhance capercaillie habitats.

‘As work continues to support capercaillie on the ground, we will also be working with partners to develop the most appropriate approach, in light of this new data and NatureScot’s Scientific Advisory Committee review.’ 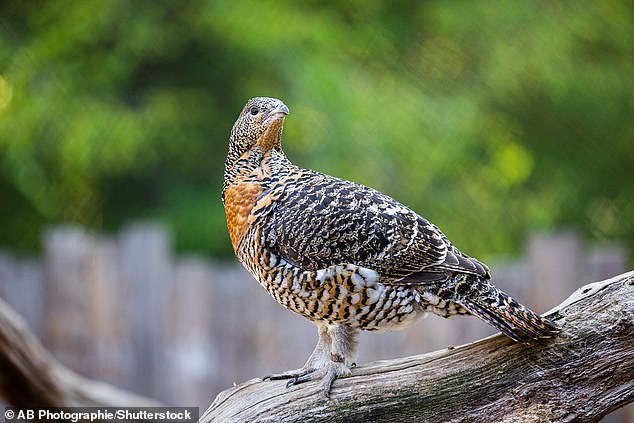 A female Western capercaillie. The species shows differences in the appearance of males and females, known as sexual dimorphism

It comes after a study by the NatureScot Scientific Advisory Committee (SAC), published in February, warned the bird is likely to become extinct again in the UK within two to three decades if the current trend in population decline continues.

The report said ‘renewed intensive measures’ are needed if the population is to be conserved, focusing on options that will improve the survival of eggs and young chicks.

It warned that any delay in enacting these ‘might result in the population declining to a point where extinction becomes inevitable’.

The new report follows an analysis published by conservation organisation BirdLife this week that revealed 49 per cent of the world’s bird species are now in decline.

HALF OF THE WORLD’S BIRDS ARE IN DECLINE DUE TO A HUMAN-BASED THREATS, REPORT SAYS

Almost half the world’s bird species have declining populations at least one in eight are threatened by extinction, a new report reveals.

The 100-year-old conservation organization BirdLife says that this year’s report, which summarizes data gathered from researchers, conservationists and citizen scientists, paints the most concerning picture for nature yet.

Forty-nine percent of the world’s bird species are now in decline, with only six percent having increased their populations since the last report in 2018.

One in eight species, or 1,409 in total, are threatened with extinction. Nearly 3 billion birds are estimated to have been lost in North America alone since 1970.

The main threats include the growth of unsustainable agriculture, logging, invasive species, over-exploitation and climate change.

Agriculture is the leading threat to birds – impacting at least 73 percent of threatened species – with its expansion into bird habitats and its increased use of chemicals and machines as it grows.