The Space Shuttle Challenger was hurtling through the air at twice the speed of sound when pilot Michael Smith noticed something alarming.

Sitting on the right side of the flight deck, Smith looked out his window and likely saw a flash of vapor or a fire.

Down on the ground at Mission Control, a computer screen indicated falling pressure in the right booster rocket. It was leaking fuel.

As was later learned, the cold of the Florida morning had stiffened the rubber O-rings that held the booster sections together, containing the explosive fuel inside. The rings failed to expand fully in the cold, leaving a gap of less than a millimeter between booster sections.

The breach allowed a few grams of superheated fuel to burn through.

At one minute and 12 seconds after liftoff, the small flame grew, taking only three seconds to penetrate the fuel tank’s aluminum skin.

The booster rockets separated, and kept blasting upward on diverging paths. A little-known Air Force official whose title was range safety officer quickly hit a self-destruct button, causing the boosters to explode and fall into the sea rather than on any populated areas. 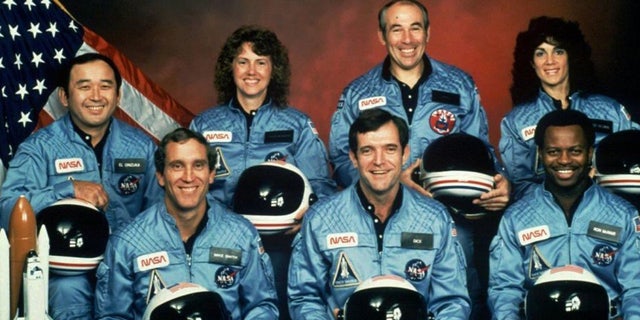 The crew of the ill-fated space shuttle Challenger.

Inside Houston’s Mission Control and Florida’s Launch Control centers, rows of S’s lined computer screens, indicating “static.” All audio and communication from the shuttle had been lost.

But the capsule the crew was sitting inside did not explode. It was ejected in the explosion, and remained intact. The brave crew members — Smith, Dick Scobee, Ronald McNair, Ellison Onizuka, Judith Resnik, Gregory Jarvis and Christa McAuliffe — survived the initial disaster and “were conscious, at least at first, and fully aware that something was wrong,” author Kevin Cook writes in the new book “The Burning Blue: The Untold Story of Christa McAuliffe and NASA’s Challenger” (Henry Holt and Co.), out now.

McAuliffe, 37, was a Concord, NH, social studies teacher who had won NASA’s Teacher in Space contest and earned a spot on the Jan. 28, 1986, mission as a payload specialist.

She was meant to be the first civilian in space, a fearless woman who set out to prove that “teachers have the right stuff, too,” as one of McAuliffe’s friends put it in the book. Instead, she ended up as arguably the most well-known name in America’s worst space-related tragedy.

Growing up in Framingham, Mass., young Christa Corrigan was always fascinated by space. She idolized John Kennedy for his push to the moon, and as a seventh-grader in 1961, she watched Alan Shepherd become the first American in space.

“But she wouldn’t have made much of an astronaut anyway,” Cook writes, “a chubby Girl Scout with no knack for science or math who got sick to her stomach on carnival rides.”

“A chubby Girl Scout with no knack for science or math who got sick to her stomach on carnival rides.” 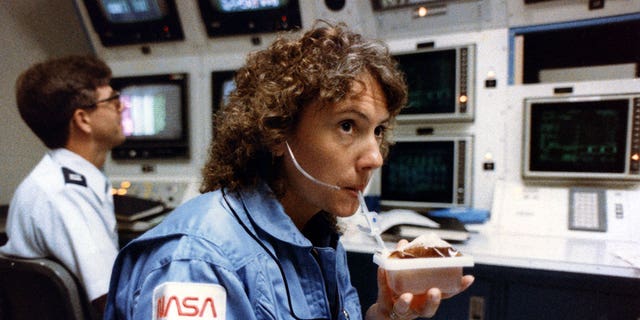 Christa McAuliffe, seen in 1985 taking a sip from a space-packaged drink prior to her ill-fated flight on space shuttle Challenger, was to teach from orbit. (NASA)

She attended Framingham State College, and in 1970, she married her former high school boyfriend Steve McAuliffe.

In 1983, she landed her “dream job,” teaching social studies at Concord High School. She was an engaging and well-liked teacher. She would bring her guitar to class and strum ’60s protest songs. She occasionally had students dress in period costumes.

Then, in August 1984, McAuliffe saw a headline in the local paper reading, “Reagan Wants Teacher in Space.”

“Today,” President Ronald Reagan said, “I’m directing NASA to begin a search to choose as the first citizen passenger in the history of our space program one of America’s finest — a teacher.”

The announcement sounded pure, but the program was really a gambit to bolster the president’s reelection chances. The administration had previously cut funding to the National Education Association, leaving the group to denounce Reagan as “America’s Scrooge on education.”

“With the election three months away,” the author writes, “the president and his advisors saw a chance to promote the space program and win teachers’ votes in one stroke.”

That fall, while attending a Washington, DC, teachers conference, McAuliffe stumbled upon a booth promoting the Teacher in Space program. She picked up an application, thinking it might be “a great way to influence students — not because it would make her famous, but because it was something unusual, something fun,” a friend of McAuliffe’s says in the book. 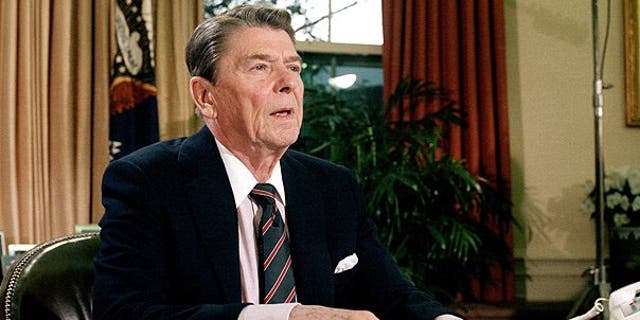 President Ronald Reagan is seen in the Oval Office after addressing the nation regarding the space shuttle Challenger explosion, Jan. 28, 1986. (Associated Press)

“Why do you want to be the first US private citizen in space?” asked one

“As a woman,” McAuliffe wrote, “I have been envious of those men who could participate in the space program and who were encouraged to excel in the areas of math and science. I felt that women had indeed been left outside of one of the most exciting careers available.”

Some 11,000 teachers applied, and the number was ultimately whittled to two from each state. A NASA blue-ribbon panel (containing, oddly, Pam Dawber from “Mork & Mindy”) spent weeks evaluating the candidates before ultimately choosing 10 finalists in July 1985.

McAuliffe made the cut, in part because of her ease on camera. “They wanted a teacher who’d be good on ‘The Johnny Carson show,’ ” another teacher finalist from Massachusetts, Bob Veilleux, says in the book. “Someone who could help make the public love space again.”

The 10 finalists were flown to Houston for a week of physical and mental tests. One teacher was nixed after he became panicked during an oxygen-deprivation trial, forcing NASA technicians to wrestle him to the ground and press an oxygen mask on his face.

McAuliffe handled everything NASA threw at her, and on July 19, 1985, Vice President George Bush announced she’d been chosen.

The Challenger was scheduled to launch in January 1986, leaving just a few months for McAuliffe to prepare. She had a foot-thick training manual to slog through, as well as vision, treadmill and other tests to complete.

Snakebitten from the start?

The launch seemed snakebitten from the start and was hit with multiple delays, including an attempt on Jan. 26, 1986, that was scrubbed due to rain. Another attempt the following day was scrapped after NASA techs struggled to fix a hatch malfunction with a cordless drill. 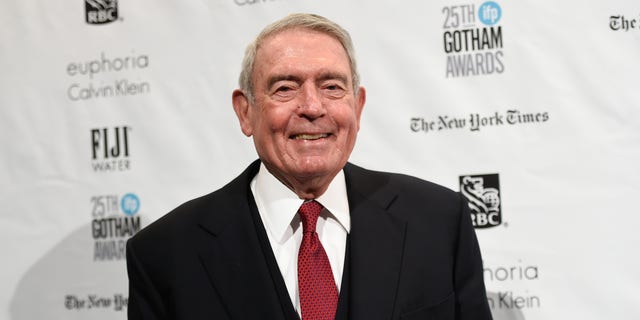 It was the sixth postponement for the high-profile mission, and the powers that be were determined it would be the last.

On the eve of January 28, temperatures at the Florida launch pad fell to 22 degrees. The launch tower’s railings and cameras were covered with ice. During a teleconference a few hours before the launch, the makers of the O-rings expressed concern that cold might compromise the shuttle, but one NASA manager infamously fired back, “When do you want me to launch — next April?”

The Challenger went ahead with its blastoff, despite temperatures much colder than any previous launch. Disaster followed 72 seconds later.

As they streaked through the air, the seven crew members were jammed into the crew cabin, with Scobee, Smith, Onizuka and Resnick on the flight deck above and McAuliffe, Jarvis and McNair on the windowless middeck below. After the booster explosion, the interior of the crew cabin, which was protected by heat-resistant silicon tiles made to withstand reentry, was not burned up.

The unexpected ignition of the rocket fuel instead gave it 2 million pounds of sudden thrust, sending it blasting into the sky and crushing the passengers inside with twenty G’s of force — multiple times the three G’s their training had accustomed the astronauts to.

An investigation later concluded the jump in G-force was “survivable, and the probability of injury is low.” 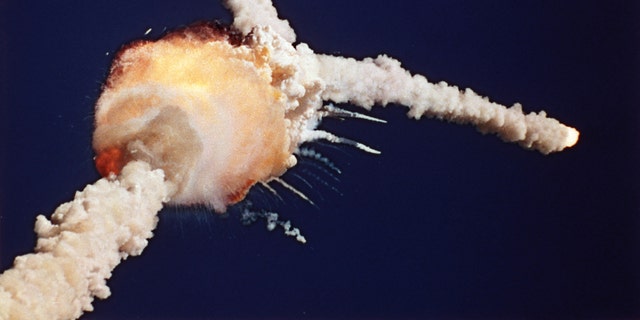 The cabin likely remained pressurized, as the later investigation showed no signs of a sudden depressurization that could have rendered the occupants unconscious. The astronauts were equipped with emergency air packs, but due to design considerations, the tanks were located behind their seats and had to be switched on by the crew members sitting behind them.

Examination of the wreckage later showed that three of the astronauts’ emergency air supplies had been switched on, indicating the crew had survived the initial seconds of the disaster.

It’s likely that the ship’s pilots tried to take control of the ship.

“What would they do then? Scobee and Smith would try to fly home,” former NASA scientist Kerry Joels says in the book.

Smith apparently tried to restore power to the shuttle, toggling switches on his control panel.

The cause, however, was hopeless.

The crew cabin continued to rise for 20 seconds before slowing, then finally dropping again some 12 miles above the Atlantic Ocean. The object ultimately reached a terminal velocity of more than 200 miles per hour before crashing into the sea. The final descent took more than two minutes.

McAuliffe was buried in Concord in an unmarked grave, because her husband feared tourists would flock to the site.

After a presidential commission to examine the disaster finished in June 1986, the pieces of the Challenger were subsequently entombed in an unused missile silo at Cape Canaveral.

As Kennedy Space Center director Bob Cabana said later, “It was like they were saying, ‘We want to forget about this.’ “