China discovers a new mineral on the moon: Phosphate in crystal form is found in samples brought back in 2020

China has discovered a new mineral on the moon, a phosphate mineral in columnar crystal named Changesite-(Y), which was identified in rock and soil samples it brought back from the lunar surface in 2020.

The mineral was carefully separated by researchers from more than 140,000 tiny particles and then analyzed through a series of advanced mineralogical methods, according to the Beijing Research Institute of Uranium Geology, one of the major institutes of China National Nuclear Corp. It is not yet known if the new mineral has properties can be used on Earth.

The announcement places China as only the third to find a new mineral on the moon – the US and Russia are first and second – and the discovery is the sixth new organic formation to be discovered since the first samples were brought back by NASA’s Apollo 11 in 1969.

Changesite-(Y) falls in the category of lunar merrillite, which is a mineral found in lunar rocks and meteorites, and is the sixth new mineral to be found by humans since the first samples were collected during the Apollo 11 mission in 1969. 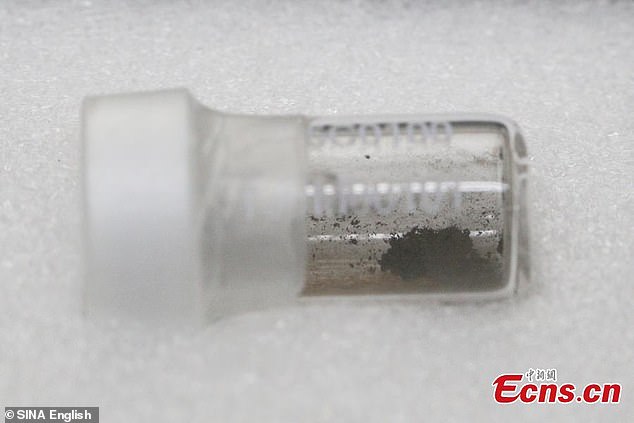 China is the third nation to discover a new mineral on the moon. Pictured is a collection off the new mineral inside a sterilized container

China’s Chang’e-5 probe returned to Earth on December 17, 2020 with the nation’s first moon samples stored inside.

The collection of rocks are said to be billions of years younger than those obtained by the US and Russia, which was the Soviet Union at the time of its mission to the moon.

The age of the rocks and soil should help scientists fill a gap in knowledge about the history of the moon between roughly one billion and three billion years ago, Brad Jolliff, director of the McDonnell Center for the Space Sciences at Washington University in the US city of St. Louis, said in a statement from February when China gave the world a glimpse at the trove of lunar rocks and soil.

The samples may also yield clues as to the availability of economically useful resources on the moon such as concentrated hydrogen and oxygen, Jolliff said.

The announcement keeps China in the space race against the US that has been tightening in recent years.

And the pair are battling it out to see who can lay claim on the moon.

In July, NASA administrator Bill Nelson, told Bild that the US is now involved in a space race with China. 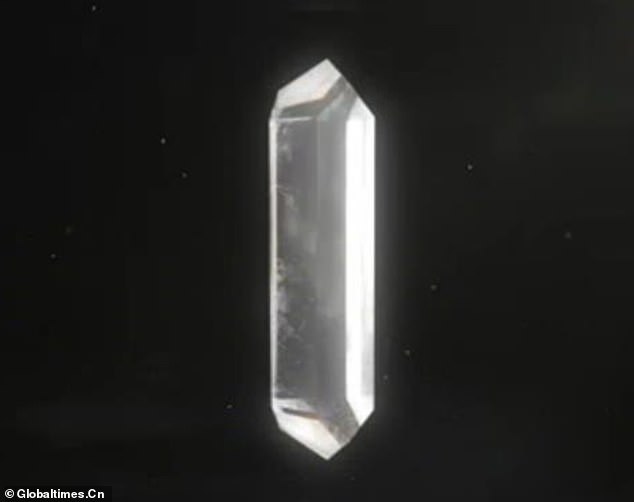 The new mineral is a phosphate in columnar crystal that Chinese officials named Changesite-(Y). It was identified in rock and soil samples it brought back from the lunar surface in 2020 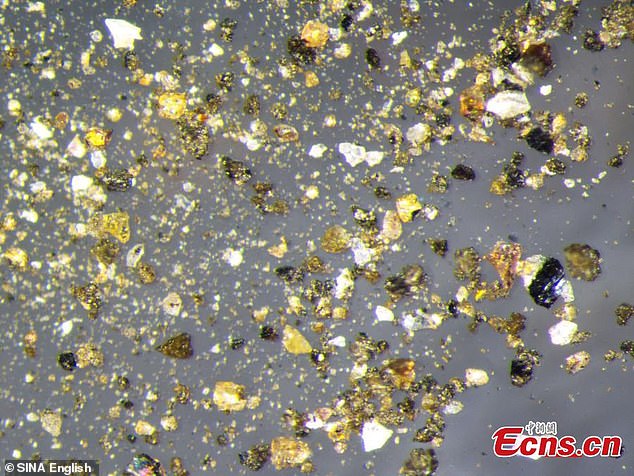 The mineral was carefully separated by researchers from more than 140,000 tiny particles  (pictured) and then analyzed through a series of advanced mineralogical methods

‘We must be very concerned that China is landing on the moon and saying: ‘It’s ours now and you stay out’,’ he told German newspaper.

China, however, did not take the allegations lightly.

Zhao Lijian, a spokesman at the Chinese foreign ministry, said in a statement: ‘This is not the first time that the head of the US National Aeronautics and Space Administration has ignored the facts and spoken irresponsibly about China.

‘The US side has constantly constructed a smear campaign against China’s normal and reasonable outer space endeavors, and China firmly opposes such irresponsible remarks.’

Nelson also said Chinese astronauts are being trained to destroy other country’s satellites and the nation ‘has stolen ideas and technology from others’ in order to make its claim on the moon.

Zhao said Beijing had always advocated the peaceful use of outer space and opposed its weaponization.

‘The development of China’s space industry has been achieved entirely through independence and self-reliance, and its rights and achievements cannot be questioned or discredited in any way,’ Zhao said. 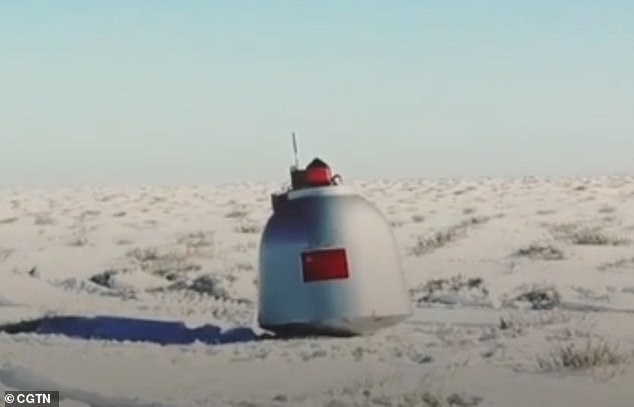 China’s Chang’e-5 probe returned to Earth on December 17, 2020 with the nation’s first moon samples stored inside

NASA appears to be threatened by China’s move into the space race, as the nation is the most recent space agency to venture to the moon.

It was revealed this month that China is eyeing the same lunar landing spots as NASA for its first mission to send humans to the moon.

The American space agency announced in August that it has chosen 13 possible landing spots for its Artemis III mission and 10 of them overlap with China’s mission.

The overlapping sites are partly the result of the region of the moon’s higher elevation, good lighting and proximity to shadowed craters that may trap water-ice, according to SpaceNews, which first reported the overlap.