China is set to land its Zhurong rover, currently strapped to the Tianwen-1 orbiter, on Mars tonight as part of the country’s first interplanetary mission.

Officials revealed Thursday that the capsule will embark on its ‘seven minutes of terror’ around 19:11 ET (00:11 BST), enduring the same tumultuous conditions NASA’s Perseverance rover went through to land in Jezero crater earlier this year.

Zhurong, named after an ancient god of fire, is tucked in the belly of China’s Tianwen-1 spacecraft that entered parking orbit around Mars in February.

The rover will descend into the thin atmosphere tonight and attempt to land in the Utopia Planitia, that is the same area as NASA’s 1976 Viking 2 lander. 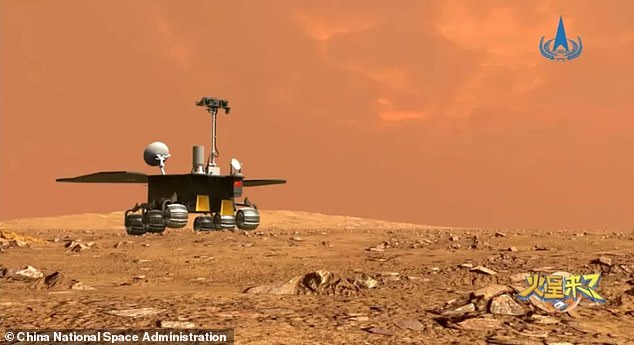 The seven minutes of terror is a term used to describe the tumultuous conditions that batter the craft as it enters the Martian atmosphere and approaches the surface.

During this time, teams on Earth lose full communication with the craft for 10 minutes.

The spacecraft will shoot through Mars’ atmosphere moving at 12,000 miles per hour, but then must slow down to a gentle landing within seven minutes.

If Zhurong touches down successfully, it will be the first non-US rover to land on Mars. There have been seven rover missions to the Red Planet – but two Soviet missions in the 70s failed:

Mars Pathfinder Sojourner (NASA) – Rover was the first to successful land on Mars when it touched down July 4, 1997. It travelled just 330 feet, but was active for 85 days before contact was lost on October 7, 1997.

Mars Exploration Rover Opportunity (NASA) – Landed on January 25, 2004 and was active until contact was lost on June 10, 2018 after a dust storm covered its solar panels and it failed to charge its batteries. It travelled 28.06 miles during its mission – the furthest of any Mars rover.

Mars Science Laboratory Curiosity (NASA) – Landed on January 25, 2012 and is currently active after more than 3,000 days.

Zhurong is tucked in the belly of the orbiter Tianwen-1 that has been circling the planet for months, mapping the surface in preparation for descent of China’s rover and lander.

The spacecraft gets its name from the title of an ancient poem and means ‘Quest for Heavenly Truth’ in English.

It arrived at Mars on February 10, 2021, then carried out a complicated manoeuvre to enter a temporary parking orbit on February 24.

The lander and the rover, weighing 2,866 pounds together, are set to drop from the orbiter as a whole.

The duo will enter the Martian atmosphere inside a heat shield that will be ejected to release a massive parachute.

The two spacecraft will need to significantly reduce speed – from around 12,427 miles (20,000km) per hour to zero – in just seven minutes for the landing, according to Liu Tongjie, deputy director of the Lunar Exploration and Space Program Center at China’s National Space Administration.

NASA’s Perseverance used the famed ‘sky crane’ to make a safe landing on the Martian surface, but China’s method includes thrusters at the base of the craft to slow down the descent.

According to CNSA, if the landing is successful, a ramp will be deployed on the lander to slowly roll out the rover onto the surface.

The craft is set to touchdown in the Utopia Planitia basin, the same spot NASA’s 1976 Viking 2 lander was delivered.

Zhurong will emerge from the capsule to study the area that is said to have ice deposits under the surface, but Chinese officials have yet to reveal specific plans.

CNSA, which keeps a tight lid on its endeavours, only recently announced the name of the rover in April.

‘Zhurong is the god of fire in ancient Chinese mythology, which echoes with the Chinese name of the red planet, Huoxing (meaning the planet of fire),’ CNSA shard in a statement. 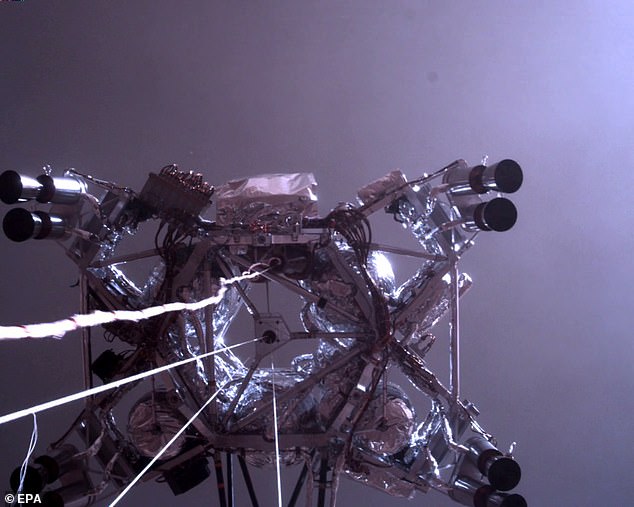 NASA’s Perseverance used the famed ‘sky crane’ (pictured) to make a safe landing on the Martian surface, but China’s method includes thrusters at the base of the craft to slow down the descent 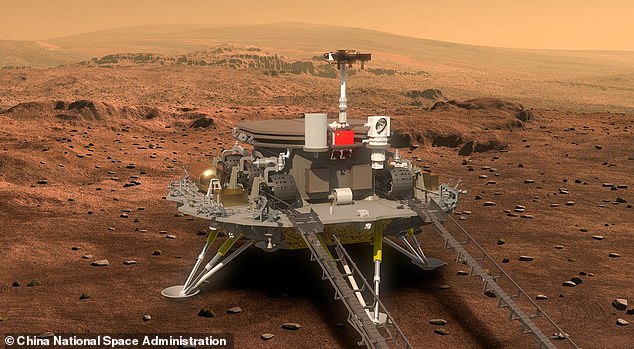 The lander (pictured) and the rover, weighing 2,866 pounds together, are set to drop from the orbiter as a whole. The duo will enter the Martian atmosphere inside a heat shield that will be ejected to release a massive parachute

The craft is set to touchdown in the Utopia Planitia basin (pictured), the same spot NASA’s 1976 Viking 2 lander was delivered

‘Fire brought warmth and brightness to the ancestors of humankind, and fire lit up human civilization.’

‘The name is another example of Chinese aerospace workers’ scientific romance as they have named spacecraft, including Tianwen, Chang’e, and Beidou, after Chinese traditional culture, which also shows the Chinese people’s spirit of exploration and cultural confidence,’ Wu Yanhua, deputy director of the CNSA said.