Climate change could cause British warship engines to cut out

Climate change could ground Britain’s WARSHIPS: Rising sea temperatures will act as a ‘thermal blanket’ and cause engines to cut out, Ministry of Defence warns

Rising sea temperatures as a result of climate change could cause the engines of British warships to fail, the Ministry of Defence (MoD) has warned.

During a ‘Defence and Climate Change’ presentation held by the Defence Committee yesterday, Lt Gen Richard Nugee, who offers guidance to the MoD on making defence more sustainable, said that warmer waters could act as a ‘thermal blanket’.

Ships generally rely on the cold seas to cool their engines, and therefore they ‘might have a problem’ if global warming raises the water temperature.

‘Ship captains were saying to me that the engines have the potential to cut out with the surface sea temperature it is today, let alone at 38 to 40 degrees,’ Lt Gen Nugee said.

‘So there’s something that we need to understand and we need to do something about to make sure that our engines can cope with that sort of water.’ 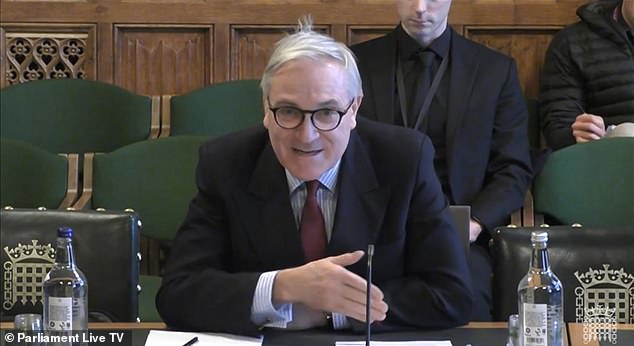 Lt Gen Nugee (pictured) is a retired senior British Army officer and the Lead of the Ministry of Defence’s 2021 Climate Change and Sustainability Review. He spoke at a ‘Defence and Climate Change’ session yesterday 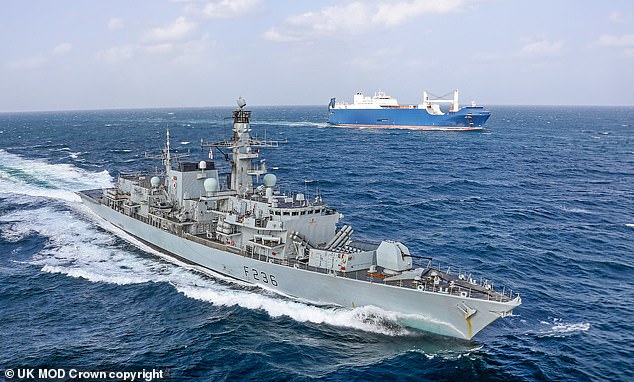 Ships generally rely on the cold seas to cool their engines, and therefore they ‘might have a problem’ if global warming raises the water temperature. Pictured: Royal Navy’s HMS Montrose patrolling the Gulf of Oman

THE FUTURE OF THE BRITISH COASTLINE

A Met Office report published in July revealed that sea levels are rising up to three times faster than they were a century ago.

Researchers at the University of East Anglia revealed that the UK could  an of nearly three feet (1m) by the end of the century.

They found that, by the end of the century, the rocky coasts in North Yorkshire and Devon could be retreating ten times as quickly as they are now.

A World Meteorological Organisation (WMO) Report published in May found that ocean heat had reached a record high in 2021.

Professor Albert Klein Tank, the director of the UK’s Met Office for Climate Science and Services, said: ‘Around 90 per cent of the heat from climate change is accumulated in the ocean and last year’s record signals that climate change is progressing.’

Deep ocean is defined as water more than 2,300ft (700m) below the surface, and is what stores most of the heat humans have produced since the Industrial Revolution.

Extreme marine heat is now being described as ‘the new normal’, as more than half of the surface of the world’s oceans have experienced it since 2014.

Lt Gen Nugee is a retired senior British Army officer and the Lead of the Ministry of Defence’s 2021 Climate Change and Sustainability Review.

During yesterday’s session, he warned that Britain’s seaports could end up underwater if we experience ‘even 1.5°C degrees’ of warming.

The MoD’s climate adviser claimed that if both the Antarctic and Greenland Ice Sheets were to melt, sea levels could rise by 33 feet (10 metres).

He said: ‘In practical terms, that would mean the runway, for example, in Gibraltar would be underwater.

‘So would, say, Port Stanley and in the Falklands, but even Portsmouth and Devonport could not cope with 10 meters of sea level.

‘The combination of rising sea level over time and more severe storms, which is another feature of climate change, means that our ports are going to be more difficult to use frankly, and maybe ultimately underwater.’

Lt Gen Nugee did stress that it was ‘going to take time’ to reach these eventualities, but if we exceed the tipping point it would be ‘near impossible to get back’.

Last year, in the Climate Change and Sustainability Review, he warned that climate change was ‘changing the way our military fight, live and train’.

His report also suggested that military vehicles could be electric in future, with others running with fuel and parts that have been made from recycled material.

The planet remains ‘on the brink of climate catastrophe’ after a deal was struck at the end of the COP27 summit yesterday, according to climate experts.

Rich governments that attended the gathering sealed a pact to provide poorer countries with financial assistance, known as a ‘loss and damage’ mechanism.

This will see countries paying billions to vulnerable states hit by extreme weather and rising sea levels as a result of climate change.

However, many attendees have warned that the result of the conference is not ambitious enough on cutting emissions.