Climate change could DOUBLE the frequency of extreme regional summer droughts in Europe by 2099 – with France, the Alps, the Mediterranean and the Iberian Peninsula most likely to be affected, report warns

Climate change could result in the number of ‘extreme summer droughts’ in Europe doubling by 2099, a report has warned.

The climate crisis has already had a number of drastic global impacts, including an increase in the number of droughts, ‘causing considerable social, economic, and environmental costs’, according to the researchers from the Ludwig-Maximilians-Universität München (LMU) in Germany.

The World Health Organization (WHO) says droughts are the most serious hazard to crops and livestock in every part of the world, affecting 55 million people every year.

Their analysis suggests that all areas will see some increase in the number of summer droughts, but in France, the Alps, the Mediterranean and the Iberian Peninsula the number could double. 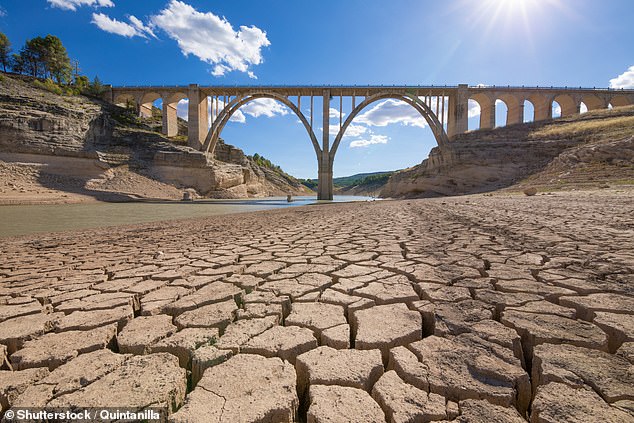 Climate change could result in the number of ‘extreme summer droughts’ in Europe doubling by 2099, a report has warned, with France among the most affected 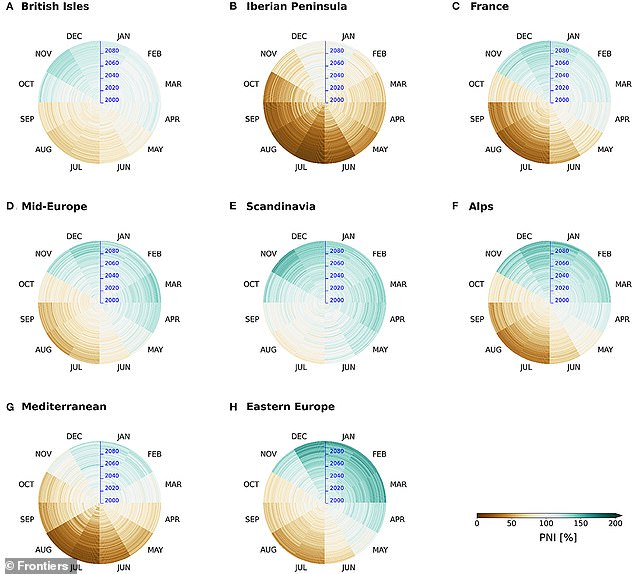 Chart to show different levels of predicted rainfall (PNI) up to 2099 in each of the eight regions analysed by the researchers, with darker browns showing increased drought risk

What is a meteorological drought?

Drought is a complex climate phenomenon covering a wide range of definitions and conditions.

Their impacts are economically, socially, and environmentally complex, and a universal definition that covers all consequences does not exist.

Droughts are instead classified by their impact: meteorological, hydrological, agricultural, or socio-economic.

Meteorological droughts are a predecessor of other drought types.

They have no clear start and end, unlike hurricanes, for example, which can easily be seen as they develop.

Drought is the absence of water, a creeping phenomenon that slowly sneaks up and impacts many sectors of the economy, and operates on many different time scales.

Meteorological drought happens when dry weather patterns dominate an area and can begin and end rapidly.

In contrast, hydrological drought takes much longer to develop and recover.

In their study, the researchers analysed the ‘percent of normal index’ (PINI), designed to give a percentage of rain in any given period.

They then compared that figure to the prediction of rainfall in a single climate model for eight regions of Europe over the next 80 years.

Each region they studied had a different climate, covering the British Isles, Scandinavia, mid-Europe, the Alps, Eastern Europe, France, the Mediterranean and the Iberian Peninsula.

In the long-term future, from 2080 to 2099, Europe will see an increase in frequency and intensity of summer droughts, but a drop in winter droughts, according to the research.

There will be greater differences between winter and summer rainfall levels as well, increasing during winter and decreasing over the summer months.

For mid-Europe there’s a sharp rise in the likelihood of an extreme drought – up by about a quarter of current levels.

In Eastern Europe and the Alps, severe and extreme droughts have higher probabilities in the future, going from a 20 to 40 per cent increase.

Meanwhile, in the Iberian Peninsula, the chance of extreme droughts is the highest of all regions, reaching 96 per cent in July and 88 per cent in August.

In these two regions, however, the absolute rainfall values in July and August are already low, meaning that comparatively small absolute changes can lead to high percentages of the PNI, which is a relative measure.

Weather-related disasters such as Hurricane Ida are striking four to five times more often than they did 50 years ago, a sobering UN report warned today.

Destructive events including storms, flooding and drought are causing seven times more damage than in the 1970s, but they’re killing far fewer people, according to the UN’s World Meteorological Organisation (WMO).

The WMO’s report looks at more than 11,000 weather disasters between 1970 and 2019, based on data from the Centre for Research on the Epidemiology of Disasters.

A disaster related to a weather, climate or water hazard occurred every day on average over the past 50 years – killing 115 people and causing $202 million (£146 million) in losses daily, it found.

In total, just over 2 million deaths and $3.64 trillion (£2.64 trillion) in losses were attributed to such catastrophes.

The report follows Hurricane Ida and drought-worsened wildfires in the US, as well as catastrophic floods in mainland Europe this summer.

Researching the future occurrence of droughts is crucial for adequate climate crisis mitigation, according to the study, published in Frontiers in Water.

‘We find a clear trend towards more, longer and more intense summer droughts, in terms of a precipitation deficit, towards the end of the century under a high-emission carbon scenario (RCP8.5).’

This is the emission scenario currently most likely under global average emission levels, although governments hope to change this with new climate measures.

The impacts of droughts are economically, socially, and environmentally complex, and a universal definition that covers all consequences does not exist.

Instead, droughts are classified by their impact as meteorological, hydrological, agricultural, or socio-economic.

Meteorological droughts are a potential predecessor of other drought types and are therefore important to research, and are the type covered by this study.

Regional differences between drought events are high, and there is an urgent need to identify geographical hot spots for future drought events, the team added.

‘But also, in some regions where droughts currently play a minor role, the future drought risk is expected to get serious. We show that the Alps should be considered an additional future hot-spot.’

She said these extreme future events can be avoided by climate mitigation, including those agreed to under the UN Paris Agreement. 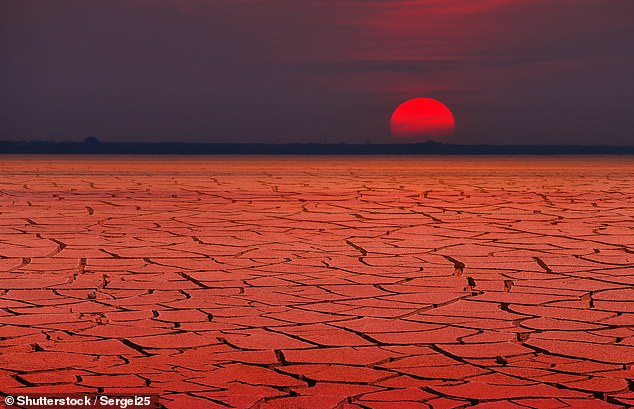 The climate crisis has already had a number of drastic global impacts, including an increase in the number of droughts, ‘causing considerable social, economic, and environmental costs’, according to the researchers

‘These three key features of: first, increasing drought occurrence in summer; second, wetter conditions in winter as well as; and third, interannual variations due to the natural variability of the climate system are visualised in what we call “drying stripes”.

‘These allow an overview of our results at first glance. The drying stripes show the percentage of precipitation for every month and year summarised over our ensemble compared to the long-term mean in a counterfactual world with pre-industrial greenhouse gas concentrations.

‘With this, they show the projected summer drying trend throughout the 21st century compared to a world without climate change.’

The findings have been published in the journal Frontiers in water.

THE KEY GOALS OF THE PARIS CLIMATE AGREEMENT

change, climate, Could, double, Dr
You may also like: