Fizzy drinks giant Coca-Cola is testing paper bottles in Europe as part of its mission to eliminate plastic waste by the year 2030.

The US company’s first-ever paper bottle prototype will be available this summer through a limited online trial in Hungary.

A run of 2,000 bottles of the company’s ‘plant-based snacking drink’ AdeZ will be offered via the country’s e-grocery retailer Kifli.hu.

The prototype is made of sustainably sourced wood with a bio-based material barrier capable of resisting not only liquid, but the gases in fizzy drinks.

It’s not 100 per cent made of paper – the prototype includes a plastic cap and plastic lining made from recycled polyethylene terephthalate (PET).

However, Coca Cola claims it is still working towards a completely paper bottle that can be recycled like any other type of paper.

The company has already pledged to collect and recycle a bottle or can for each one it sells globally by 2030 to combat plastic waste and reduce its carbon footprint.

Coca Cola was named the world’s worst plastic polluter for third year in a row last year, ahead of Nestle and PepsiCo. 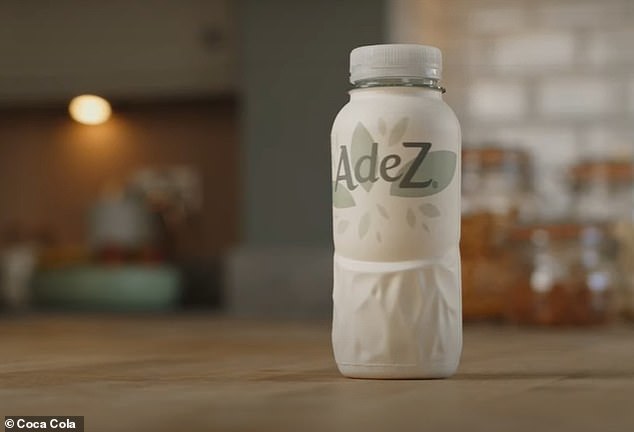 A run of 2,000 bottles of the plant-based beverage AdeZ will be offered in the pioneering package via e-grocery retailer Kifli.hu

It also accounts for 22 per cent of non-alcoholic drinks waste in England, according to findings by environmental charity Keep Britain Tidy.

Coca-Cola has worked with The Paper Bottle Company (Paboco), a Danish startup, on the bottle, which it admits is still a ‘work-in-progress’.

It’s been conducting extensive lab testing to assess how the paper bottle performs, holds up and protects its contents.

If successful, it will likely be rolled out for the company’s famous sugary-brown carbonated soft drink and its many varieties.

‘The trial we are announcing today is a milestone for us in our quest to develop a paper bottle,’ said Daniela Zahariea, director of technical supply chain and innovation at Coca‑Cola Europe.

‘People expect Coca‑Cola to develop and bring to market new, innovative and sustainable types of packaging. 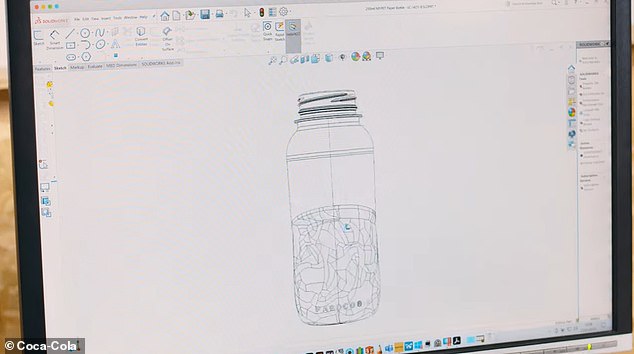 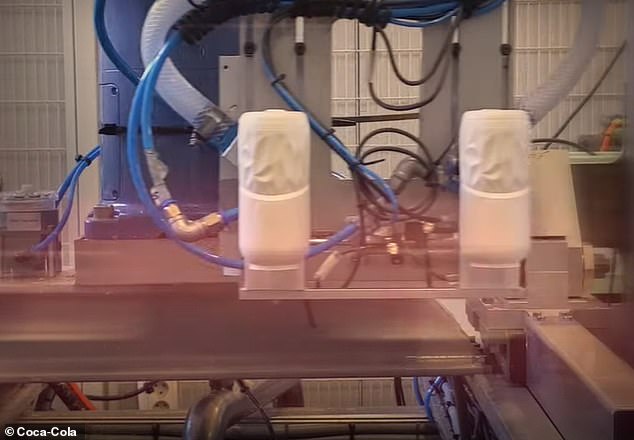 Coca-Cola has been conducting extensive lab testing to assess how the paper bottle performs, holds up and protects its contents

‘That’s why we are partnering with experts like Paboco, experimenting openly and conducting this first in-market trial.’

The prototype is formed out of a single piece of paper-fibre-based material that’s been wrapped into shape.

Moulding a single object rather than relying on a series of joins means bonds between the paper fibres stay robust when the beverage is bottled under pressure.

‘With a clever combination of product design and the strong fibre blend, that’s what makes it really possible to not break under pressure,’ Michael Michelsen, Paboco’s commercial manager, told the BBC.

Paper also brings several technical advantages, such as flexibility and strength, which Michelsen said ‘can enable designs that other materials are simply unable to match’. 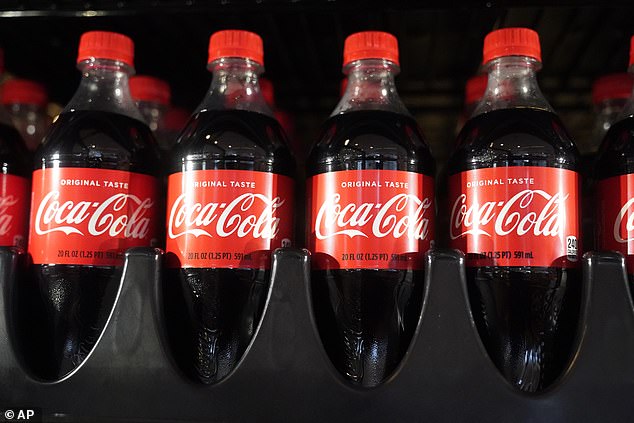 The protype will help Coca Cola meet its sustainability targets. The firm was named the world’s worst plastic polluter for third year in a row last year, ahead of Nestle and PepsiCo

Paper bottles could ultimately be used for other sectors such as cosmetics and home-care, as well as carbonated and still liquids.

Pabaco, a joint venture between paper packaging material developer BillerudKorsnäs and bottle manufacturing specialist ALPLA, is also devoted to rolling out paper bottles for other brands.

Last year, vodka-maker Absolut rolled out 2,000 paper bottle prototypes, made up of 57 per cent paper and 43 per cent recycled plastic, as part of consumer trials in the UK and Sweden.

Danish brewer Carlsberg is also developing the first paper bottles made of sustainably-sourced wood fibres that are able to contain beer. 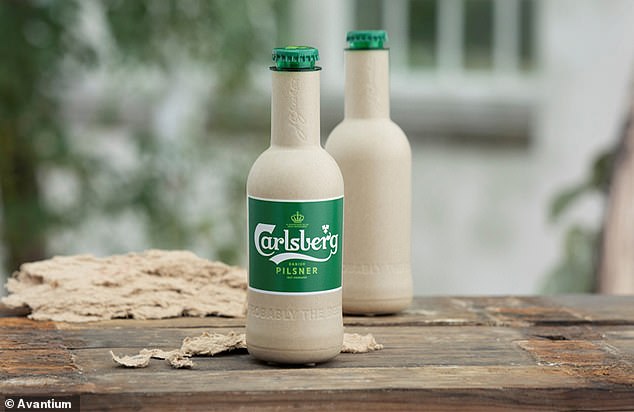 Pictured, new research prototypes of the Green Fiber beer bottle, which are the first ‘paper bottles’ that are able to contain beer, from beverage giant Carlsberg

Coca-Cola, which is criticised for being one of the biggest producers of plastic waste, announced last week that it will sell its popular sodas in bottles made from 100 per cent recycled plastic material in the US.

The company will start rolling out the new 13.2-ounce bottles of Coke, Diet Coke, Coke Zero Sugar, Coca-Cola Flavors this month in select states in the Northeast, Florida and California.

Recycled bottles will help reduce its use of new plastic by more than 20 per cent across North America compared with 2018.

‘We realise our unique opportunity and clear responsibility to make a positive difference in the global plastic crisis,’ said Alpa Sutaria, the company’s general manager for sustainability.

Coca Cola previously told MailOnline that it’s committed to reducing its total carbon emissions by 25 per cent from where they were in 2015 by 2030.

‘Climate change is a critical global problem, with immediate action required across industry to play its part in substantially reducing carbon emissions,’ a company spokesperson said.

‘In 2019, we set a new science-based target for our business representing the share of carbon we need to reduce to help keep global climate change safely below the 2-degree threshold aligned with the Paris Agreement targets.’

In December 2020, Coca-Cola was named the world’s worst plastic polluter for the third year in a row, followed by fellow non-movers PepsiCo and Nestle.

It found that Coca-Cola products – including brands Fanta and Sprite – were by far the most common branded plastic found.

Coca-Cola’s plastic waste was more than the combined total from the second and third most common brands found, Nestle (8,633) and PepsiCo (5,155). 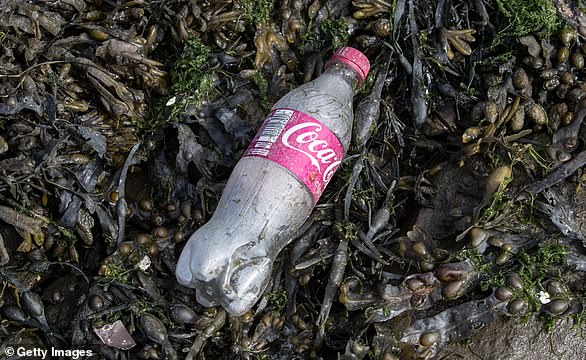 An annual audit by environmental group Break Free From Plastic collected almost 350,000 pieces of plastic from 55 countries, finding that Coca-Cola products – including brands Fanta and Sprite – were by far the most common branded discarded plastic litter. Pictured: A Coca-Cola bottle on a beach in Plymouth, UK [File photo]

Greenpeace Southeast Asia said it was unsurprising that these mammoth brands were the worst offenders three years in a row.

‘These companies claim to be addressing the plastic crisis yet they continue to invest in false solutions while teaming up with oil companies to produce even more plastic,’ Abigail Aguilar, Plastics Campaign Regional Coordinator, Greenpeace Southeast Asia, said in a Break Free From Plastic press release.

‘To stop this mess and combat climate change, multinationals like Coca-Cola, PepsiCo, and Nestle must end their addiction to single-use plastic packaging and move away from fossil fuels’.