A small device that emits electrical pulses could save the lives of more than 50 million sharks and rays worldwide that are accidentally killed by bycatching each year.

Called SharkGuard, the cylinder-shaped gadget attaches to longline fishing rigs and creates an electrical field around the baited hook, forcing the creatures to swim away.

The pulse overstimulates the sharks and rays, stopping them from interacting with the baited hook.

Studies conducted on French boats fishing for tuna showed lines fitted with the device reduced the accidental catching of blue sharks by 91 percent and stingrays by 71 percent.

SharkGuard currently requires frequent battery recharges, which is not available on most fishing ships, and a set of 2,000 costs around $20,000. 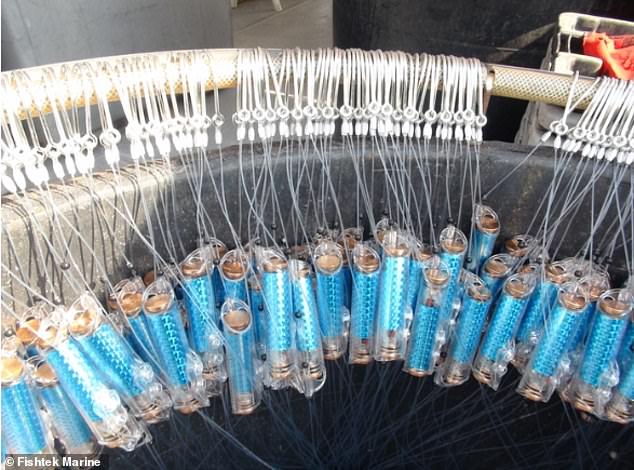 SharkGuard is a small, cylinder-shaped device that releases a pulse into the water to stop sharks and sting rays from attaching to baited hooks meant for other fish

SharkGuard was developed by conservation engineers Fishtek Marine and tested by researchers at the University of Exeter.

SharkGuard, powered by a small battery, targets the area around a shark’s nose and mouth packed with electrical sensors called the ampullae of Lorenzini.

These sensory organs are overstimulated by the electric field generated by the device, which makes the sharks swim away from the danger of the baited fishing hooks.

Dr Phil Doherty, of the Centre for Ecology and Conservation on Exeter’s Penryn Campus in Cornwall, said in a statement: ‘Many shark and ray populations are declining due to overfishing – particularly oceanic species such as blue sharks and pelagic stingrays that are commonly caught on longlines globally.

‘There is an urgent need to reduce bycatch, which not only kills millions of sharks and rays each year but also costs fishers time and money.’ 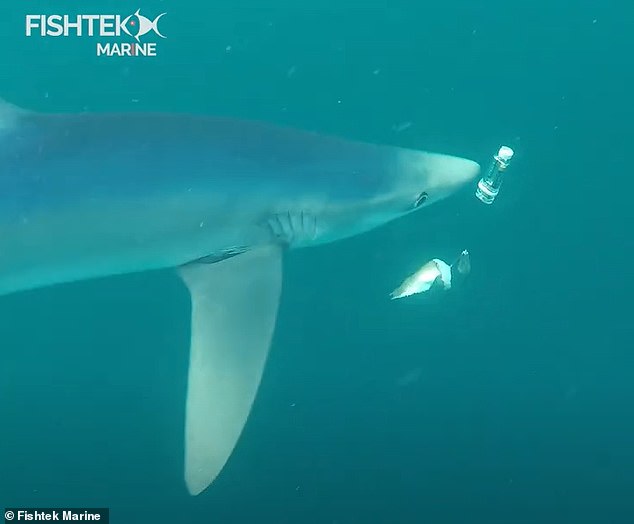 To test the technology, researchers sent two fishing boats on 11 trips off the coast of southern France and during this time, fishermen used 22 longlines deployed with over 18,000 hooks.

The SharkGuard was placed 10 centimeters above the eye of the hook to deter sharks from snatching the bait.

While there was a drop in sharks and rays caught, the researchers reported a 42 percent reduction in bluefin tuna caught.

Doherty said the total number caught in the test period – on lines with and without SharkGuard – was low, so further trials are needed.

He added that engineers are now modifying the device to make it smaller and self-charging after every haul. 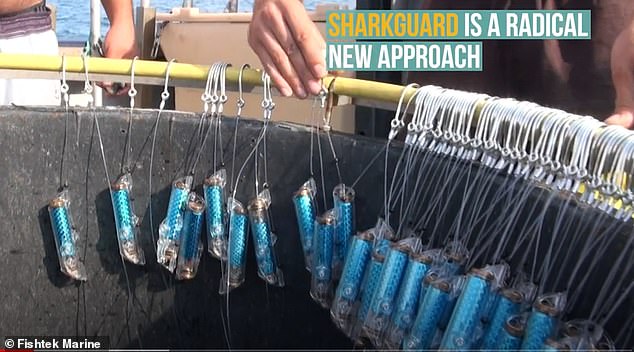 Pete Kibel, co-founder and director of Fishtek Marine, said ‘When SharkGuard is used, sharks do not take the bait and do not get caught on the hooks, and that gives us a tremendous sense of hope.

‘Against the relentless backdrop of stories of dramatic population declines occurring across all of our marine species, it is important to remember that there are people working hard to find solutions.

‘SharkGuard is an example of where, given the appropriate backing, it is possible to roll the solution out on a sufficient scale to reverse the current decline in global shark populations.’

Professor Brendan Godley, who leads the Exeter Marine research group, said the device had ‘the potential to be a global game-changer for the sustainability of longline fishing.’