Dolphins in Wales 'whistle at the highest frequencies in the world'

Dolphins living off the coast of Wales that have developed their own ‘Welsh accent’ whistle at higher frequencies than those recorded anywhere else in the world, scientists say

Dolphins swimming off the coast of Wales — which have been found to have their own ‘Welsh accent’ — speak faster than those anywhere else in the world, new research suggests.

The whistles of pods around Cardigan Bay have a unique regional signature and were found to be at a higher frequency than others across the globe.

Experts on the BBC nature series Wonders of the Celtic Deep, which explores the west Wales coastline, made the discovery after a study of 240 bottlenose dolphins. 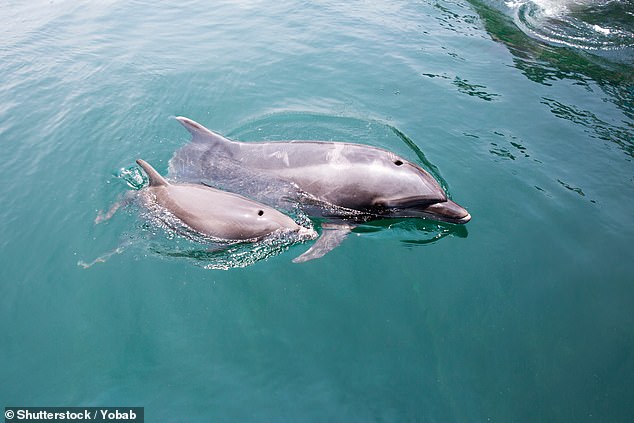 Dolphins swimming off the coast of Wales — which have been found to have their own ‘Welsh accent’ — speak faster than those anywhere else in the world, research suggests (stock image)

How do dolphins use ‘signature whistles’?

Signature whistles are sounds made by dolphins, used to identify different individuals.

Dolphin calves will eventually make their own individual whistle, but in the first stages of life, they use their mother’s.

In a previous study, researchers observed a dolphin mother at Six Flags Discovery Kingdom in California, who gave birth to a dolphin baby called Mira in 2014.

They recorded 80 hours of sounds from the mother, baby, and other dolphins in the enclosure, during the two months before birth, and two months after birth.

The recordings showed that the mother dolphin began increasing her signature whistle two weeks before birth, and continued to do so for two weeks after birth, before tapering off.

In contrast, the other dolphins in the enclosure did not produce their own signature whistle at very high rates during this time.

‘Each dolphin has its own unique signature whistle and the Cardigan Bay dolphins may have their very own dialect.

‘Their whistles are at a higher frequency than those recorded anywhere else in the world.’

Researchers have previously discovered the Cardigan Bay dolphins have different sounding whistles to other pods found around the UK.

A 2007 study was made by marine scientist Ronan Hickey, of the University of Wales in Bangor, and experts from the Shannon Dolphin Foundation in Ireland.

They digitised and analysed 1,882 whistles from 120 Irish Sea dolphins to find the Welsh dolphins had their own accent.

Speaking at the time, project leader Dr Simon Berrow said: ‘We’re trying to associate whistle types with different forms of behaviour — like foraging, resting, socialising and communicating with their young.

‘One was distinctive and exclusive to the dolphins of Cardigan Bay.

‘We’re really building up a dictionary of a whole range of sounds. There are whistles, clicks, barks, groans and a gunshot sound which they might use to stun their prey.’

The discovery followed studies showing that cows moo in regional accents and bird calls vary across the country.

In 2007, cheesemakers in the West Country said that their cows had a distinct local accent, a claim backed up by experts who said the ‘dialectical variations’ would be influenced by peer groups. 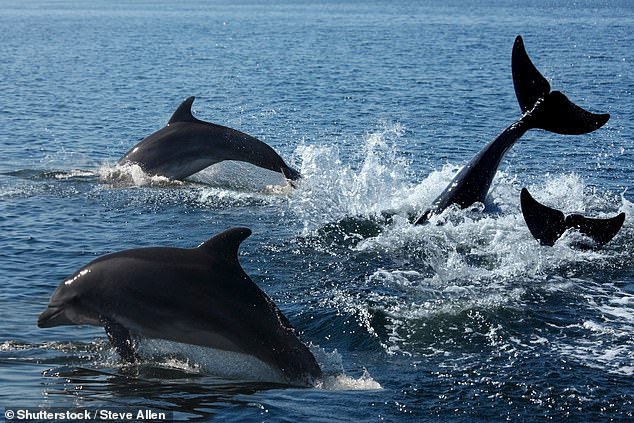 The Welsh dolphins are a major attraction for tourists on boat trips from New Quay and Aberaeron and from vantage points on the coastline.

More than 25,000 holidaymakers take sightseeing tours on boats every year to watch their antics.

‘It’s nice to know they have their own Welsh accent.

‘Dolphins are very important to our tourist industry and I’m sure the fact that they whistle in Welsh will be an added attraction.

Whales and dolphins have been spotted ‘carrying’ or caring for their dead young multiple times.

These creatures could be mourning or they have failed to accept or recognise that the offspring or companion has died.

Scientists still do not know if aquatic mammals truly recognise death and are looking to carry out more research on this issue.

In 2016, scientists found evidence that whales and dolphins hold ‘vigils’ for their dead.

They analysed several cases where mammals clung to the bodies of dead compatriots, and kept vigil over a dead companion.

At the time, they said the most likely explanation was mourning.

The study compiled observations from 14 events.

They found mothers often carried their dead young above the water, often flanked by friends.

In many cases, the dead offspring were decomposed, indicating they had been held for a long time.

'Weird' turtle-like dicynodonts 'were the first animals to have tusks'

Hubble telescope has stopped working for the second time this year

The Mary Rose is being destroyed by specks of iron, sulphur and zinc