What a rubbish view! Drone survey of Dorset coast finds more than 1.5 TONNES of litter including glass bottles, wet wipes and cigarette butts dropped in just ONE week

A coastal survey using drones in Dorset has laid bare the scale of the UK’s litter problem.

The drones flew over beaches in Bournemouth, Christchurch and Poole across seven days in the May half term this year.

Eighteen sites along the seafront in the region were monitored between May 27 and June 2, covering an overall area of 475,000 square metres.

The technology found more than 1.5 tonnes of rubbish left behind by visitors – a third of which were glass bottles when measured by volume.

In all, more than 123,000 items were identified, up from 22,266 in a drone survey of the same areas during the March lockdown – marking an astonishing 454 per cent increase due to relaxing lockdown measures.

The top three items littered (in terms of number of items) were:

Surprisingly, personal protective equipment (PPE) including masks and disposable gloves only made up 0.7 per cent of the total litter.

But the volume of litter was said to have been caused by just 20 per cent of the visitors on the beach during the half-term week, as the vast majority had taken their rubbish home with them.

All the different items were identified thanks to the drones’ artificial intelligence (AI) software, created by tech firm Ellipsis Earth.

The software can classify types of waste while it flies over – from different plastic types, like PET and styrofoam, as well as other specific items and named brands.

Data gathered from the drones will help inform street cleaning schedules as Dorset prepares for a busy summer.

‘The data we provide is not only highly accurate but also extremely detailed, allowing us to develop specific, targeted recommendations for BCP Council to be able to focus their efforts with maximum effect.’ 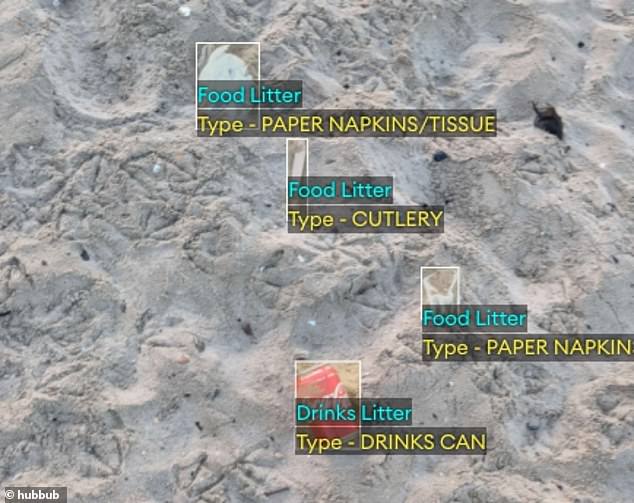 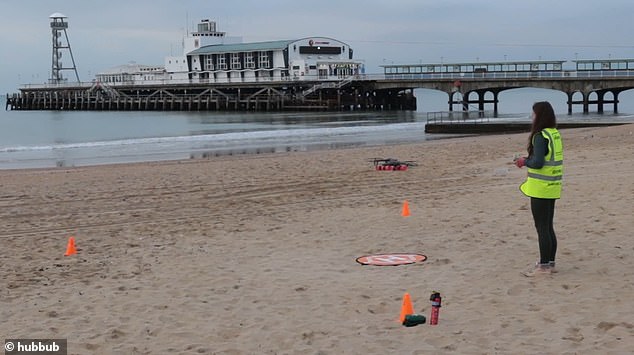 Ellipsis Earth launches a drone on Bournemouth seafront. The technology previously used in the UK in March

The project is led by BCP Council and environmental charity Hubbub, and includes funding from McDonalds, as well as the fast food giant’s suppliers Britvic, Seda and Huhtamaki.

Hubbub has also rolled out a range of creative initiatives to make Bournemouth, Christchurch and Poole’s bins more engaging and noticeable.

These initiatives, launching today, include glow-in-the-dark bins and the world’s first disco bin that lights up and plays music.

There are also ‘ballot bins’ where you can place a vote using your rubbish – such as whether Jack Grealish or Raheem Sterling is more worthy of a start in England’s next Euro 2020 match against Germany on Tuesday. 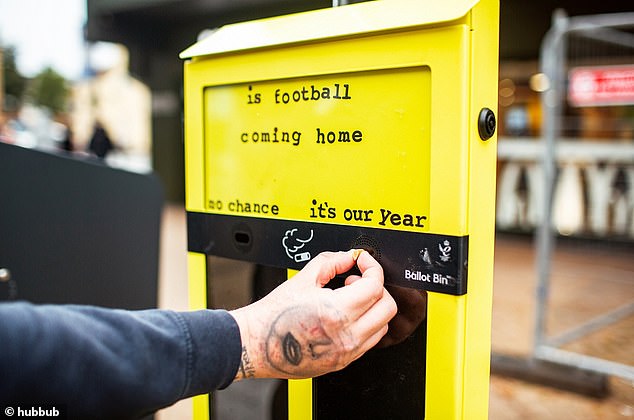 Is football coming home? Hubbub is rolling out ballot bins across Bournemouth, Christchurch and Poole that let you have your say on current topics, including Euro 2020

There will also be a Catch of the Day spoof fishmonger stall that will pop up at weekends to raise awareness of plastic pollution.

And in a bid to crackdown on litter on the seafront at the resort, electronic signage will lead people to the next nearest bin if one is full.

‘The litter survey has provided us with fascinating insight into where litter is being dropped and when across the region,’ said Trewin Restorick, Hubbub CEO and co-founder.

‘The challenge now is to get more people noticing and engaging with the bins.

‘We’re trialling a range of ideas, experimenting with messaging, colour and playful interaction – such as installing voting bins where users cast their vote on a changeable topic.’

However, BCP Council is also urging both residents and visitors to help do their part to keep the litter levels down and protect the environment. 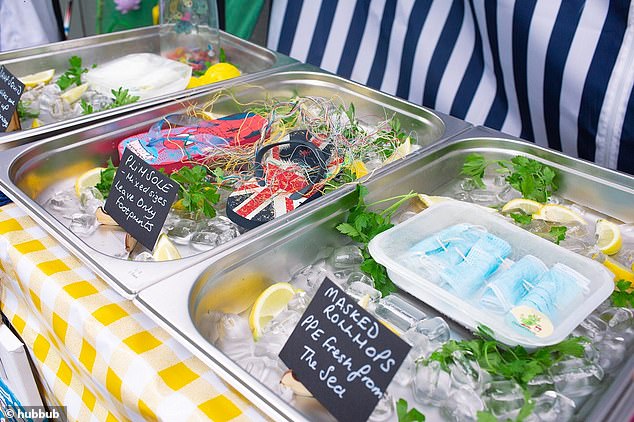 Ellipsis Earth used the drone technology in the Italian town of Sorrento last summer, where it was hailed a huge success – enabling authorities to reduce litter by 45 per cent and cigarette butt waste by 69 per cent.

Based on the data collected this was done through communication campaigns with visitors and business owners and strategically placing new litterbins and ash trays across the town.

The technology was previously used in the UK in March, but the scale of the problem was far less pronounced as the public was still in lockdown.

A further survey in Bournemouth, Christchurch and Poole will take place in August to assess the effectiveness of the new anti-litter initiatives.

McDONALD’S ACCOUNTS FOR HALF OF ALL FAST-FOOD LITTER IN ENGLAND: 2020 REPORT 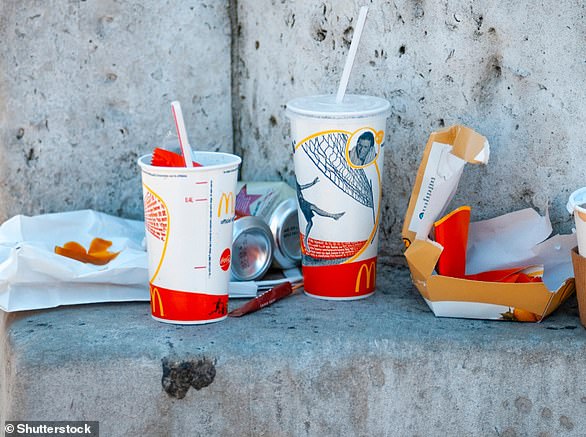 By brand, McDonald’s was the most common source of waste, accounting for coffee cups and discarded food packaging

McDonald’s packaging accounts for half of England’s fast-food litter, while Coca-Cola makes up one in five discarded non-alcoholic drink containers, a 2020 study found.

Brands making up the greatest proportion of litter overall are large household names, with McDonald’s emerging most frequently, followed by Coca-Cola and Wrigley’s gum.

But of the 75,551 items of rubbish picked up by the charity, cigarette butts made up a third in terms of number of items dropped.

Plastic bottles, meanwhile, make up the biggest proportion of the country’s rubbish by volume, accounting for a quarter of all rubbish discarded on streets, parks and beaches.

But in total, 75 per cent of all litter by volume was drinks containers – not just plastic bottles but also cans, glass bottles, coffee cups and cartons.