Earth’s magnetic field weakens every 200million years, according to study of ancient lava flows in Scotland

Researchers analyzed rock samples from ancient lava flows in Strathmore and Kinghorn in Scotland, which reinforces the idea over the last eight decades.

Dr Louise Hawkins and colleagues at the University of Liverpool performed thermal and microwave examination on the rock samples.

The samples were incredibly valuable and one of the few constraints that remain preserved, as most evidence on Earth’s interior processes is constantly destroyed by plate tectonics.

Earth’s magnetic field is crucial for life on the planet as it protects it from deadly solar radiation. The research might help explain future behavior of the geomagnetic field, and how it will affect humans.

The magnetic field starts in the deep core of the planet and it extends into the vacuum of space. 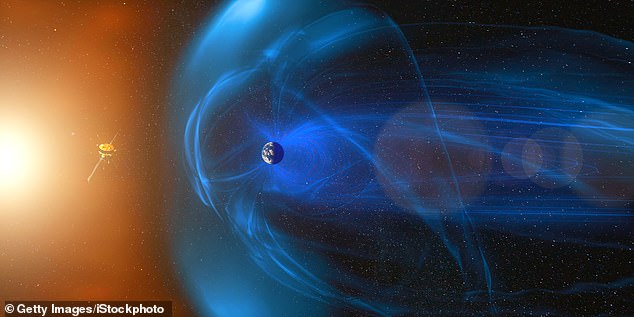 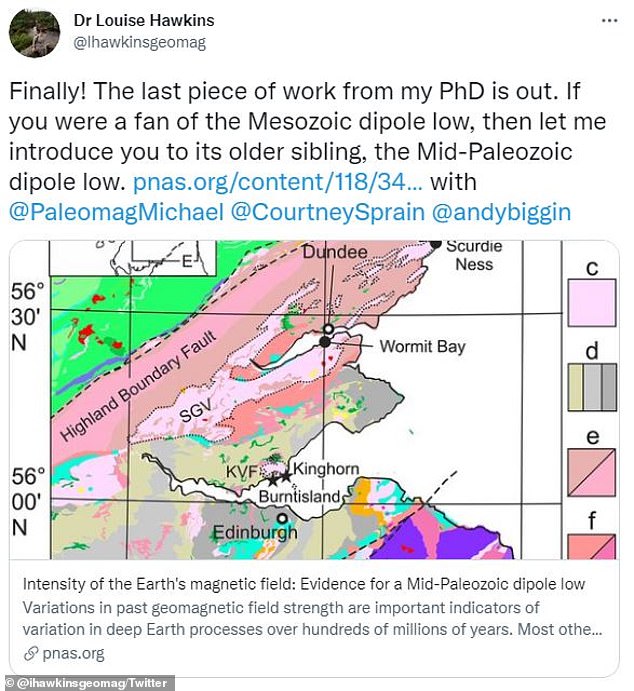 Dr Louise Hawkins, the leading researcher, shared on Twitter news about the study, which was published on Tuesday, August 17 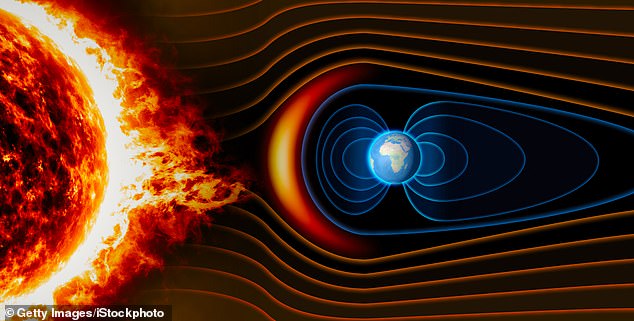 The field fluctuates in terms of strength and direction, both over time and space

In looking at the rocks, the researchers confirmed that Earth’s magnetic field had a quarter of its current strength, between 332 and 416 million years ago. The researches have called it Mid-Paleozoic dipole low.

The Mesozoic Dipole Low (MPDL), another similar period of low magnetic field around 120 million years ago, had already been identified by researches 30 years ago.

The new findings further support the theory that geomagnetic field’s is periodic and weakens approximately every 200 million years.

A 2012 study had already planted the idea, but its limitation was that the field data presented was just from the last 300 million years.

Earth’s magnetic field is made up of molten iron and other metals in the outside core, which creates electromagnetic currents, also known as the dynamo action, and protects the planet from solar radiation.

The field is unstable and fluctuates in terms of strength and direction, both over time and space.

Recent and prior research establish a record that could help predict Earth’s magnetic field in the years to come.

When the geomagnetic field strength is at its lowest, solar radiation negatively impacts Earth the most. 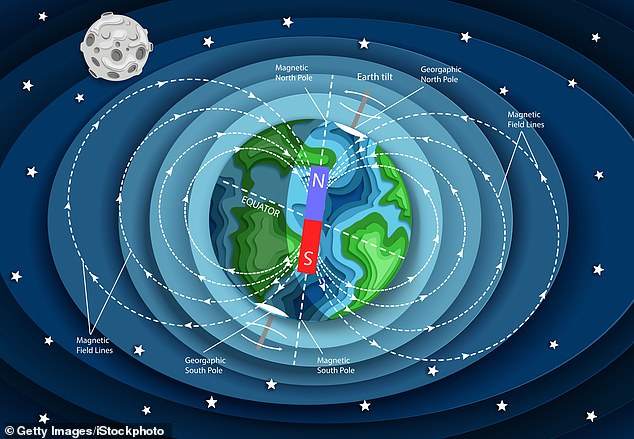 Between 332 and 416 million years ago, the Earth’s magnetic field’s strength was less than a quarter of what it is today

The mass and mysterious extinction at the Devonian-Carboniferous boundary 359 million years ago, which resulted in 50% of animals and plants becoming extinct, was caused by spiked radiation levels, similar to those during the MPDL when the geomagnetic field’s strength was extremely low.

Dr Hawkins, who is the lead author of the paper said: ‘This dataset compliments other studies we have worked on over the last few years, alongside our colleagues in Moscow and Alberta, that fit between the ages of these two locations.’

‘Our findings also provide further support that a weak magnetic field is associated with pole reversals, while the field is generally strong during a Superchron, which is important as it has proved nearly impossible to improve the reversal record prior to 300 million years ago,’ said Hawkins.

The research was published in Proceedings of the National Academy of Sciences.