Why erect-crested penguins reject their first egg: Endangered birds only rear their SECOND egg because it is larger and has a better chance of survival, study reveals

An endangered species of penguin has been found to destroy or ignore its first egg, and only raise its second one.

The female erect-crested penguin typically lays a small egg and then a larger one around five days later.

However scientists believe that only the second egg is reared because it is bigger and has a better chance of survival.

The erect-crested penguin is the least studied of all penguin species and it lives on two isolated islands south-east of New Zealand; the Antipodes and Bounty Islands.

For the study, researchers from the University of Otago reanalysed data collected while observing their highly unusual courting and egg laying habits.

They are now calling for targeted conservation of this species, which is put further at risk from climate change impacts. 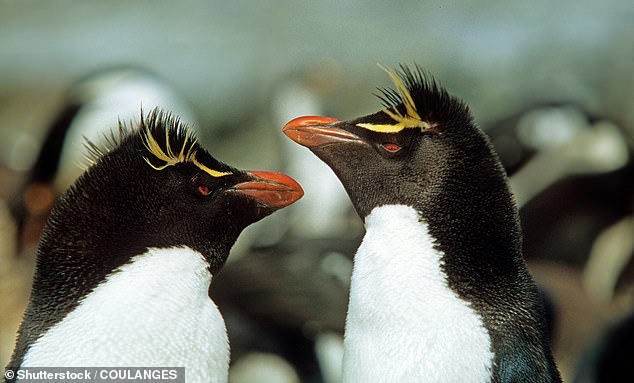 The erect-crested penguin is the least studied of all penguin species and it lives on two isolated islands south-east of New Zealand; the Antipodes and Bounty Islands 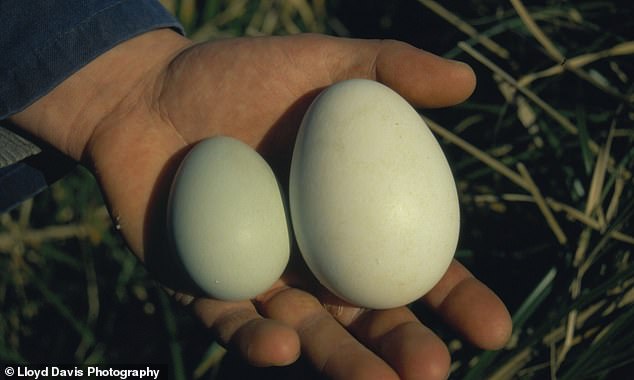 The difference in sizes of eggs within a clutch of erect-crested penguins is the largest for any bird, with the first-laid egg (left) being far smaller than the second-laid egg (right)

Prior to this work, published in in PLOS ONE, most of what was known about these penguins came from a 1998 study from lead author Professor Lloyd Davis.

The lack of research into the species could, in part, be due to its remote habitats.

In this latest study, researchers noted that the erect-crested penguin engaged in what’s known as ‘brood reduction’, where it produces more eggs than is possible to rear.

Other species of birds that do this lay a second egg as a form of insurance, in case the first chick does not survive.

However, the erect-crested penguin sacrifices its first egg – the reason for which was, up until now, unknown.

As Professor Davis’ 1998 data set was the most extensive published about the species, his team decided to reanalyse it to discover the answer.

They sought to learn more about the birds’ strange behaviour and to provide a basis for future conservation efforts.

The data shows that, typically, the penguin’s first egg is lost either before or soon after the second egg is laid and parents sometimes deliberately break or reject it.

Around 40 percent of mating penguin pairs do not even bother to incubate the first egg, with steady incubation occurring only after the second egg is laid.

Even when researchers put a ring of stones around some nests to stop the first egg from rolling away – a common occurrence – it was still often broken or not incubated.

They also discovered that the second egg laid by female erect-crested penguins is often larger than the first.

This may be because females begin to form their first egg while still at sea and their second egg after reaching land, where it has fewer constraints and can grow bigger.

Therefore, it is now thought that the reason the first egg is sacrificed is because the chick inside is more likely to starve than the one in the larger second egg.

The researchers suggest that the erect-crested penguins have retained the reproductive habit of their ancestors, who laid and hatched two eggs.

However, the modern penguins now sacrifice their first egg as they can’t provide enough food for both chicks.

Even when researchers put a ring of stones around some nests to stop the first egg from rolling away – a common occurrence – it was often broken or just not incubated by the parents. Pictured: Common causes of first egg losses in erect-crested penguins 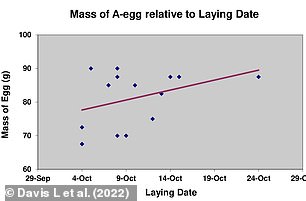 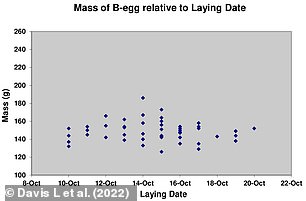 During laying, females had testosterone levels that were as high as the males but they dropped during incubation and rose in males.

This may help the males to protect the nest and guard the incubating females from bullying by other birds.

Despite these evolutionary traits that help the species survive, the population has declined sharply in the last 50 years.

Evidence suggests that climate change is negatively impacting their breeding on the Antipodes Islands, making their egg-selecting habits a detriment to their survival.

A greater numbers of storms and mudslides in recent decades has wiped out parts of colonies and killing nesting penguins.

Rising ocean temperatures have already caused the population of eastern rockhopper penguins to crash and they are likely affecting the erect-crested penguin’s ability to reproduce and feed as well.

The scientists cautioned that, without more research attention into its population dynamics, the species will continue to decline until threatened with extinction. 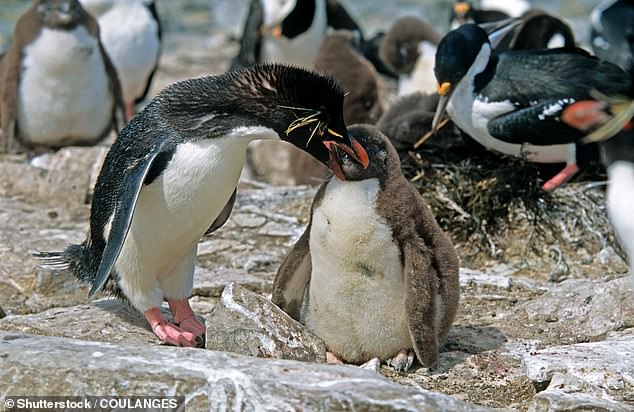 The erect-crested penguin population has declined sharply in the last 50 years. Evidence suggests that climate change is negatively impacting their breeding on the Antipodes Islands, making their egg-selecting habits a detriment to their survival

Professor Davis said: ‘This study highlights the paradox that such an intriguing and endangered penguin species should be so little known in this day and age that the best data we have comes from nearly a quarter of a century ago.

‘When three of us went to the Antipodes Islands in 1998 to conduct research on the erect-crested penguin, it was by far the least studied penguin species.

‘Sadly, the situation remains unchanged: the very few studies conducted since then have been involved mostly with just counting the numbers of erect-crested penguins breeding on the Bounty and Antipodes Islands south-east of New Zealand.

‘These studies have documented further drastic declines in the population of erect-crested penguins on the Antipodes Islands from those that we had observed in 1998.’ 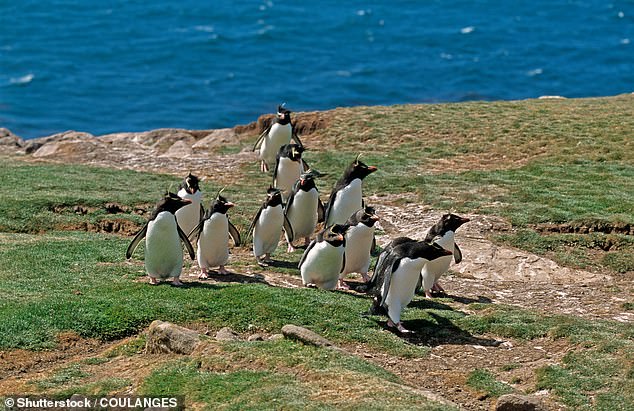 The scientists cautioned that, without more research attention into its population dynamics, the species will continue to decline until threatened with extinction

The researchers concluded: ‘Remaining an enigma will not change the plight of erect-crested penguins.

‘Research priorities increasingly determine prospects for survival of many species around the world.

‘Although not typically considered to be part of the conservation science toolbox, conservation marketing could be used to influence the outcome for a troubled species like the erect-crested penguin.

‘Without prioritising conservation market for erect-crested penguins, we are likely to be limited, as here, to describing continued declines in the species and, in essence, drafting an obituary for nature.’

Emperor penguins on the pathway to EXTINCTION, with 98% of colonies expected to be wiped out by 2100

Research has warned that Emperor penguins are on the pathway to extinction.

A whopping 98 per cent of colonies expected to be wiped out by 2100 if greenhouse gas emissions continue to rise at levels similar to today.

Carbon emissions have previously been linked with an increase in extreme climate events, such as glacial calving and sea ice loss in the Antarctic, where Emperor penguins live.

Following the study, led by Woods Hole Oceanographic Institution in Massachusetts, the US Fish and Wildlife Service has announced a proposal to list the species as threatened under the Endangered Species Act.