Lagrangey McLagrangeFace? European Space Agency is calling on the public to help rename its Lagrange spacecraft that will fly ‘behind’ Earth to spot potentially hazardous solar storms

The European Space Agency (ESA) is calling on the public to rename its Lagrange spacecraft, which will spot potentially hazardous solar storms from the Sun before they reach Earth.

The new space weather mission will keep constant watch over our ‘unpredictable and often unruly’ star, sending back a steady stream of data to ESA.

Suggestions for the satellite’s name can be made from now until October 17 on the ESA’s website, and the winner will get a ‘nifty prize’, the space agency says.

Someone has already suggested ‘Lagrangey McLagrangeFace’ in reference to Boaty McBoatface, the public’s choice of name for the Natural Environment Research Council’s research vessel.

Boaty McBoatface officially topped a poll over the name for a new polar research ship during a competition launched by the Natural Environment Research Council (NERC) in 2016.

The suggestion received 124,109 votes – more than three times that of its closest contender.

However, the £200 million research vessel was not christened with the winning suggestion after a final decision by then science minister Jo Johnson.

Instead he announced that the Boaty McBoatface name would be used for one of the submersibles aboard the Sir David Attenborough – the name chosen for the research ship – instead.

Despite topping a public poll in 2016, ‘Boaty McBoatface’ was ultimately rejected as the name of the ship in favour of ‘RRS Sir David Attenborough’.

But the wacky name was affectionately given instead to an on-board submarine in recognition of the public’s zany contribution.

ESA, which has asked for the ‘best and liveliest’ ideas, will likely be hoping for some slightly more sensible suggestions to name its spacecraft.

Once operational, the spacecraft will be the first of its kind, according to the ESA.

Flying to a unique position in space, fixed in relation to the Earth and the Sun, it will have a ‘side view’ of the latter.

ESA says: ‘From here, it will see sources of dangerous solar activity – like sun spots – before they rotate into view from Earth, as well as follow the propagation of solar events as they travel toward Earth.

‘The mission’s data will be used to make timely warnings available to national authorities, industries and organisations who rely on or look after the modern technological systems on which we all depend and which are at risk from the Sun’s outbursts.’

Overall, the mission will combat problems presented by solar storms – which aren’t dangerous to humans on Earth’s surface, but they can cause interference with power grids and GPS signals, and present harm to astronauts. 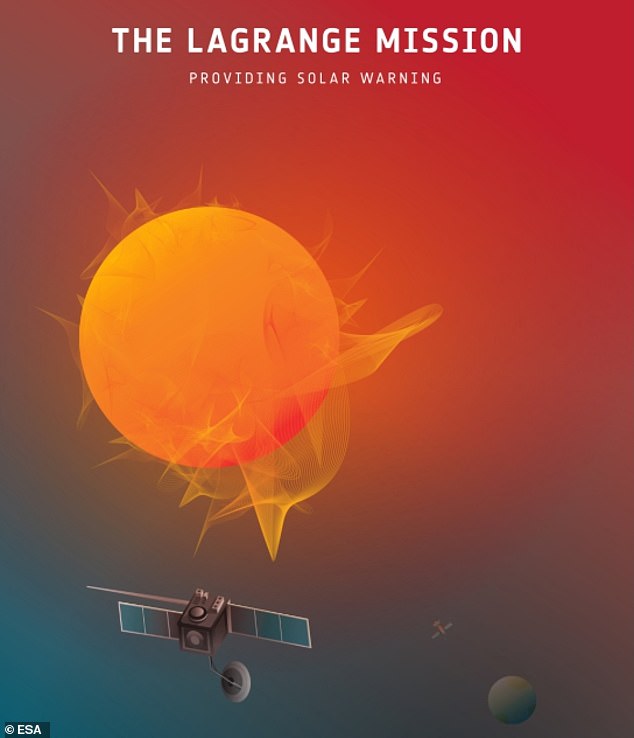 The new space weather mission, yet to be properly christened, will keep constant watch over the Sun, sending back a steady stream of data to ESA’s Space Weather Service Network

The Sun frequently ‘sneezes’, ejecting billions of tonnes of hot plasma into space in colossal blobs of matter threaded with magnetic fields that are called ‘coronal mass ejections’ (CMEs).

These violent solar sneezes sometimes spin outward from the Sun in our direction, delivering radiation, energy and charged particles that distort and disrupt Earth’s protective magnetic field and upper atmosphere. 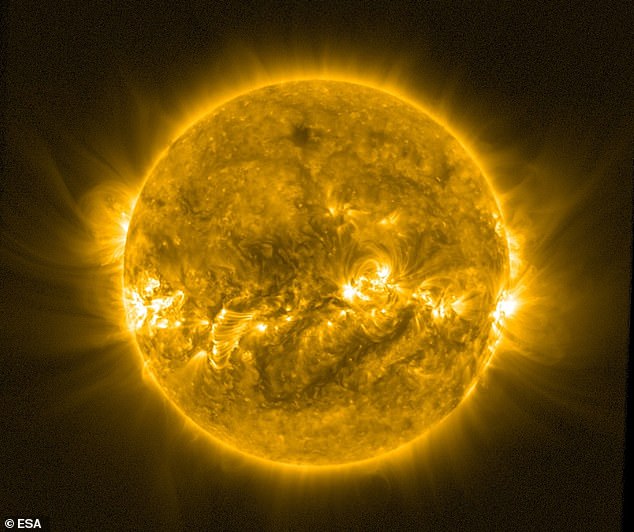 ESA says: ‘Harmful space weather has affected Earth before, but as we become increasingly reliant on systems and technologies vulnerable to the Sun’s outbursts, future solar impacts could be even more disruptive.

‘Early warning of such events can make a real difference, giving civil authorities crucial time to prepare and protect our vital infrastructure on Earth as well as explorers in space.

‘That’s precisely what our new mission will do as it monitors “the side” of the Sun, getting a view of sunspots – often the sources of potential solar outbursts – before they rotate into view from Earth.’