Meet Hamititan and Silutitan: Scientists discover two new giant dinosaurs that were both twice as long as a BUS and lived in China 130 million years ago

Palaeontologists have unearthed two new giant dinosaur species, both twice the size of a bus, that lived in northwest China some 130 million years ago.

Unearthed near the city of Hami in eastern Xinjiang, the massive sauropods — dubbed ‘Hamititan’ and ‘Silutitan’ — are among the first vertebrates from the region.

While their remains are limited — far from complete skeletons — the team have estimated that Silutitan was more than 66 feet long and Hamititan some 56 feet.

Given their sizes, the long-necked, long-tailed and thick-legged dinosaurs likely weighed somewhere in the order of 40 and 35 tonnes, respectively.

The Hami site is known for its abundance of fossils of the pterosaur Hamipterus tianshanensis, among which are perfectly preserved eggs and embryos. 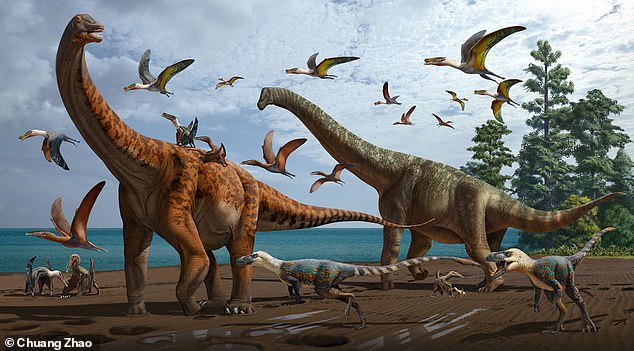 Palaeontologists have unearthed two new giant dinosaur species, both as almost long as a cricket pitch, that lived in northwest China some 130 million years ago. Pictured: an artist’s impression of Silutitan sinensis (left) and Hamititan xinjiangensis (right), surrounded by pterosaurs of the species Hamipterus tianshanensis and smaller, bird-like theropod dinosaurs 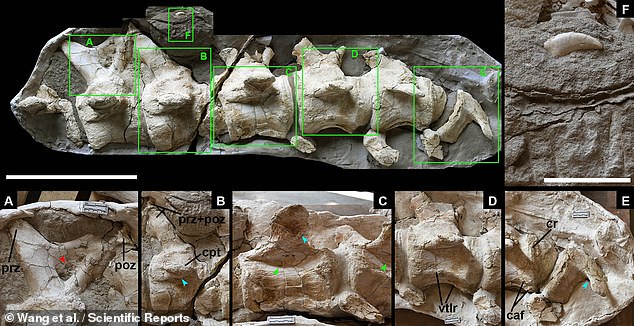 While their remains are limited — far from complete skeletons — the team have estimated that Silutitan was more than 66 feet long and Hamititan some 56 feet. Pictured: the tail vertebrae of Hamititan xinjiangensis (top right), with the green close up sections shown inset

They reached to 130 feet long and weighed up to 80 tonnes — 14 times the weight of an African elephant.

They had nostrils high up on their skulls, rather than being located at the end of the snout like those of so many other terrestrial vertebrates.

The description of the new species was undertaken by palaeontologist Xiaolin Wang of the Chinese Academy of Sciences, Beijing, and his colleagues.

‘The discovery of Silutitan sinensis and Hamititan xinjiangensis increased the sauropod diversity of Asia, particularly from an area where these vertebrates are not common,’ the researchers explained in their paper.

‘Hamititan xinjiangensis is one of the few titanosaurian sauropod recovered from Asia, which shows an unusual combination of sauropod features.’

Together, they added, the two discoveries provide ‘further support for a widespread diversification of these sauropods during the Early Cretaceous of Asia.’

In their study, the team analysed a number of fossil fragments from the Hami site — including vertebrae and rib cage parts — from three individual dinosaurs, including one Hamititan, one Silutitan and the other an unidentified ‘somphospondylan’ sauropod.

(The somphospondylans were a group of dinosaurs who lived from 160.3–66 million years ago and were characterised by features including the precense of at least 15 neck vertebrae and bevelled radial bones.)

They identified distinctive features on all of the fossilised remains and compared them with other sauropod dinosaurs from elsewhere in China and beyond in order to show that the first two sets of bones belonged to previously unknown species.

According to the researchers, the nature of the neck vertebrae of Silutitan suggests that it belonged to a family of sauropods known as the Euhelopodidae — which to date have only been unearthed from sites in East Asia.

Based on comparison to a related genus, Euhelopus, the team came to the conclusion that Silutitan likely grew to reach more than 66 feet (20 m) in length.

Hamititan, meanwhile — was was identified from seven tail vertebrae — is thought to have reached around 66 feet long, based on comparisons with members of the related genera rapetosaurus and opisthocoelicaudia. 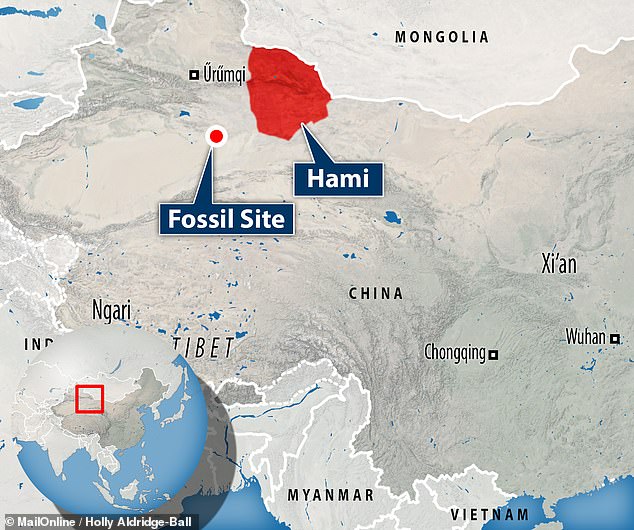 Unearthed near the city of Hami in Eastern Xinjiang, the massive sauropods — dubbed ‘Hamititan’ and ‘Silutitan’ — are among the first vertebrates from the region 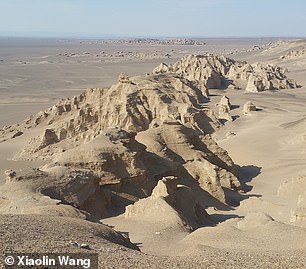 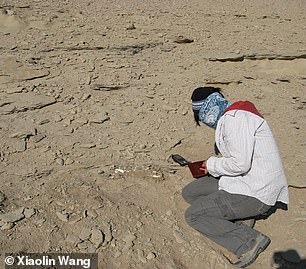 The Hami site is known for its abundance of fossils of the pterosaur Hamipterus tianshanensis, among which are perfectly preserved eggs and embryos. Pictured: the locality where the fossil remains were found (left) with the dinosaur fossils shown in situ (right)

dinos, Experts, Find, Giant, t, two
You may also like: