Experts reveal the FIVE kinds of relationships between cats and owners

Getting purrsonal! Scientists reveal the FIVE kinds of relationships between cats and their owners — including friendship, co-dependence and remote association

Scientists have revealed the five types of relationships between cats and their humans — among which are ‘friendship’, ‘co-dependence’ and ‘remote association’.

Researchers from the University of Lincoln polled 3,994 cat owners about their own behaviours towards their feline friends — and vice versa.

Alongside the study, the team have also published an interactive quiz so that cat owners can find out what kind of relationship they have with their pets. 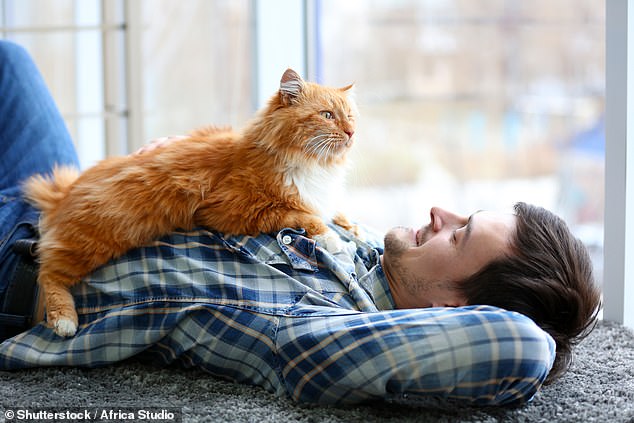 Scientists have revealed the five types of relationships between cats and their humans — among which are friendship, co-dependence and remote association

‘Cats form close emotional relationships with humans, yet little is actually known about this,’ said paper author and animal behavioural expert Daniel Mills of the University of Lincoln.

‘As with any complex social relationship, the type of cat-owner bond is a product of the dynamic between both individuals involved, along with their certain personality features,’ he added.

‘While many cats may be aloof, it seems that this is not as common as might be portrayed.’

‘The wider sociability of the cat and owner expectations may be significant and the owner’s level of emotional investment in the cat and the cat’s sociability appear to be particularly important in discriminating what type of relationship they have.’

Professor Mills and his colleagues designed their questionnaire to gather data on the different emotional elements that underpin the cat–human relationship.

These, they explained, included how much the cat appeared to perceive their owner as a secure base in their home, as well as the extent to which owners engaged with their pets, were sensitive to their needs and were consistent in their interactions.

Alongside ‘friendship’, ‘co-dependence’ and ‘remote association’, the other two relationship types identified were ‘casual relationship’ and ‘open relationship’.

The team said that they hope that their findings will not only improve our understanding of how we relate to cats — but also improve pet care generally.

The full findings of the study were published in the journal Animals.

THE FIVE RELATIONSHIP STYLES BETWEEN CATS AND HUMANS

This cat has often come to depend on a very emotionally invested owner (the cat is very important to the owner, possibly seen as family or as a great friend).

The owner typically plays regularly with the cat, and is seen as a part of the same social group (the cat behaves in a friendly way towards the owner, even regularly licking the owner’s hands and face) and as a secure base (the cat will seek the owner when worried).

The cat doesn’t relate well with others (is even likely to hide when, for example, someone comes to the house.

This cat has learned that good things come when the owner is near (for example: the owner stays with the cat whilst the cat is eating) and so, makes a considerable effort to maintain physical proximity to the owner (these cats can even be considered to be clingy) and separation can be problematic (the cat may not eat if the owner is away). This might suggest the cat has some problems with controlling its frustrations.

This relationship is common among cats living in a one-person household with no access outdoors.

These cats have always preferred life outdoors to life in their busy households.

They will often visit several homes in their territory (possibly having more than one home!) and might be gone for days at the time.

Even though these cats behave in a friendly way towards the owner they will not try to stay close to their carer (in fact, the chance are they will even make an effort to put some distance between them and their owner).

The owner is emotionally invested in the cat (worries about the cat, sees him/her as a good friend or a part of the family) and will often find time to play with the cat.

The owner is seen not only as part of the same social group (the cat will regularly lick the owner’s hands and face) but also as a secure base (someone to seek out for comfort when the cat is worried).

The cat relates well to others (will greet or inspect visitors coming to the house and possibly even visit some neighbours).

Alongside the friendly and warm relationship, cat and owner can happily function independently.

This cat likes to be near the owner but doesn’t feel a need to maintain physical proximity to the owner (doesn’t always follow the owner around the house and may even take him/herself away to a preferred location).

Separation is not likely to be problematic.

This relationship seems to occur more often in busy households with more than one cat, and the cats often have some outside access.

The cats in this type of bond reflect a prototypical view of the cat as a solitary, independent animal, who should have access to the outside.

The cats relate well to other people (they are likely to greet visitors or visit neighbours) and have some affiliation with the owner, but have little need for owner proximity and may be seen as aloof.

Cats in this type of relationship are cared for, but not typically considered to be a close friend or part of the family.

They may not be very close emotionally, even though the cat’s behaviour towards the owner may be quite friendly.

These cats prefer to maintain distance from people (owners and others), possibly because they lack confidence.

They will not lick the owner’s hands and face, nor will they seek the owner even when worried.

Experts, five, kinds, reveal, the
You may also like: