Scientists studying a sample of oceanic crust retrieved from the Pacific seabed nearly a mile down have discovered traces of a rare isotope of plutonium, the deadly element that has been central to the atomic age.

They say it was made in colliding stars and later rained down through Earth’s atmosphere as cosmic dust millions of years ago. Their analysis opens a new window on the cosmos.

“It’s amazing that a few atoms on Earth can help us learn about where half of all the heavier elements in our universe are synthesized,” said Anton Wallner, the paper’s first author and a nuclear physicist. Dr. Wallner works at the Australian National University as well as the Helmholtz Center in Dresden, Germany.

Dr. Wallner and his colleagues reported their findings in Science on Thursday.

Plutonium has a bad reputation, one that is well-deserved.

The radioactive element fueled the world’s first nuclear test explosion as well as the bomb that leveled the Japanese city of Nagasaki during World War II. After the war, scientists found the health repercussions of plutonium to be particularly deadly. If inhaled or ingested in minute quantities, it could result in fatal cancers. Small amounts also pack a bigger punch than other nuclear fuels, a quality that aided the making of compact city busters that nuclear powers put atop their intercontinental missiles.

The element is often considered artificial because it is so seldom found outside of human creations. In the periodic table, it is the last of 94 atoms characterized as naturally occurring. Traces of it can be found in uranium ores. Astrophysicists have long known that it’s also spontaneously created in the universe. But they’ve had a hard time pinpointing any exact sites of its origin.

What makes the deep ocean a good place for the gathering of extraterrestrial clues is its extreme remoteness from the waves of change near the planet’s surface. It’s a sanctuary where things can sit undisturbed for millions of years. In this case, the scientists got lucky when they had a chance to study material from a Japanese expedition that sampled the seabed in the equatorial Pacific.

Stars in their cores turn light elements into heavier ones, creating elements as heavy as iron. The new discovery sheds light on the relative contributions of two different ways the universe is thought to go about making all of the elements that are heavier than iron, including many found in everyday life, like copper and zinc, mercury and iodine. 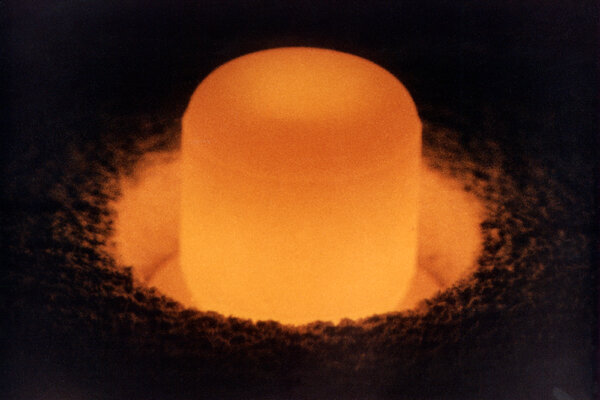 The exploding stars known as supernovas have long been seen as a main source. The abrupt gravitational collapse of a massive star turns much of its matter into heavy elements that shoot back into space as it rebounds in a colossal blast. These drifting elements ultimately get mixed with more common atoms to become the raw material for new stars and planets, or for life itself in the case of humans.

The second path is a variation on the first. A supernova leaves behind a dense, collapsed core known as a neutron star, which packs as much mass as the sun into an area about the size of Manhattan. The merger of an orbital pair of neutron stars is also seen as producing a burst of heavy elements, including gold and silver. In 2017, for the first time, astronomers looking for gravitational waves found evidence of two neutron stars smashing together, giving the cosmic theory a significant boost.

Now, the scientists report finding rare isotopes of iron and plutonium that suggest the origin of plutonium is less likely in a supernova than a neutron-star merger.

“On cosmic time scales,” Dr. Wallner said, “these are very much characteristic of recent explosive events.” The scientists date the terrestrial arrival of these particular plutonium atoms to within the past 10 million years.

Isotopes are varieties of the same element whose nuclei have different numbers of a subatomic particle known as a neutron. Most plutonium on Earth, made in reactors, is plutonium 239. Its nucleus holds 145 neutrons, and it is the material that is typically used to set off the explosive force of a hydrogen bomb.

Much of the global seabed is rich in rocky crusts of terrestrial metals deposited over the eons. The retrieved sample was roughly an inch thick and 18 inches in area. The scientists looked for extraterrestrial plutonium in the deepest layers, using an extremely sensitive detector optimized for the discovery of tiny traces of plutonium. It registered dozens of detections of cosmic atoms. They are not plutonium 239 but the rare 244 isotope, which has 150 neutrons.

The scientists found that the rare iron and plutonium isotopes in the undersea sample had a ratio “lower than required” if the plutonium’s main source was a supernova. The authors concluded that other astrophysical events, like neutron star mergers, must have contributed to its creation.

Nuclear weapon states have experimented with assorted isotopes of plutonium since the start of the atomic age but have found little of the 244 isotope on Earth. Dr. Wallner says he and his colleagues are hot on the cosmic trail.

Experts find out how whales gulp down food underwater without drowning