‘We won the World Cup of Paleontology’: Family discovers 12-million-year-old whale skull at the Chesapeake Bay – and it took researchers months to remove the 650-pound fossil

A family of three made a whale of a discovery while exploring the Chesapeake Bay in Maryland.

Cody Goddard and his wife and son were searching for sharks’ teeth when they came upon a 12-million-year-old whale skull that weighed 650 pounds and measured more than five feet long.

The fossil was discovered in October, but it took researchers at the Calvert Marine Museum two months to pull it from the ground due to its massive size.

Stephen Godfrey, curator of paleontology at the museum, said the discovery felt like they had ‘won the World Cup of Paleontology.’

While Godfrey and his team believe it is an ancient Miocene baleen whale, they are not sure what species. 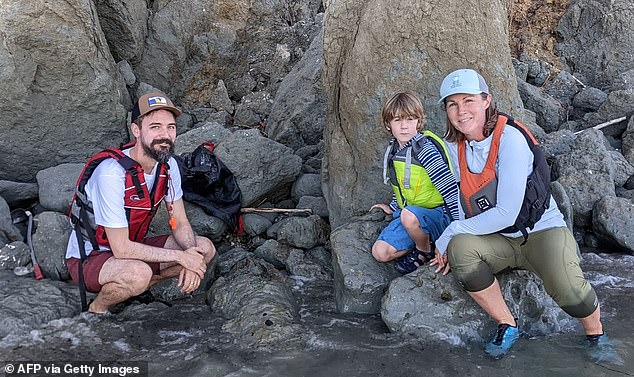 The Goddard family discovered the whale skull (in the water to the left) while exploring the Chesapeake Bay. It is the most complete fossil whale skull ever recovered in the Calvert Cliffs area, according to the museum, and has been christened ‘Cody’ (left) for its finder

It is the most complete fossil whale skull ever recovered in the Calvert Cliffs area, according to the museum, and has been christened ‘Cody’ for its finder.

The team hoisted the whale skull on wooden planks to free it from the sand, took it down the shoreline on a pontoon boat and loaded the fossil into a truck headed for the museum.

A new species of whale discovered last year in the Gulf of Mexico is already ‘on the edge of extinction’ and a group of more than 100 scientists have petitioned the Biden administration to take action in an open letter.

‘In a way, it created its own sarcophagus – its own little burial chamber that preserved it for millions of years and for us to be able to find,’ Godrey told FOX 6.

The team used the sediment along Calvert Cliffs, the region the fossil was found, to date the skull and based on its shape, they firmly believe it was a baleen whale.

‘This would have been a very hydrodynamic type of whale, so it could probably swim fairly quickly,’ Godfrey said.

‘And, of course, you’d want to because you have Megalodon swimming at that time, and you’re doing all you can to avoid being Megalodon’s next meal.’

The team will use tools similar to miniature jackhammers to delicately remove the hardened sediments that encase most of the skull.

And this process is expected to take months.

The Chesapeake Bay is a haven for fossil hunters, and one little girl recently found ‘the Meg’ while searching for sharks’ teeth with her father and sister.

Molly Sampson, 9, asked her mother, Alicia Sampson, for a pair of insulated waders to stay warm in the 10-degree weather as she searched in the waters of the Chesapeake Bay on Christmas Day.

Sampson told DailyMail.com that when her daughter left that morning, she said ‘I was going to look for Meg.’ 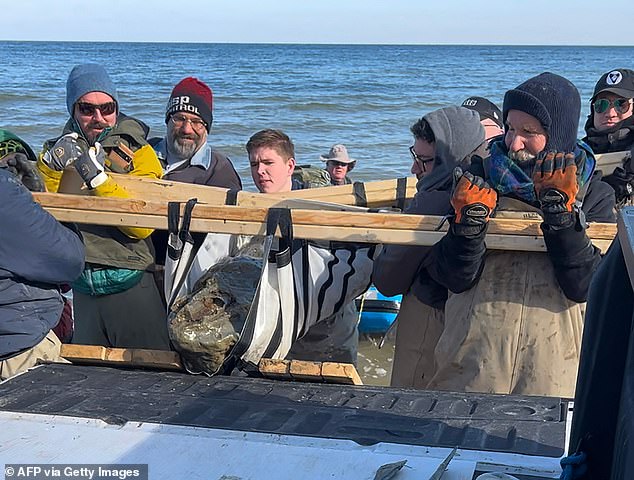 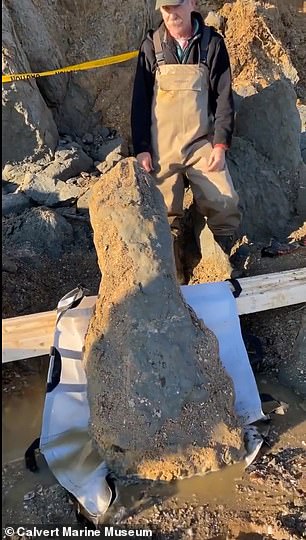 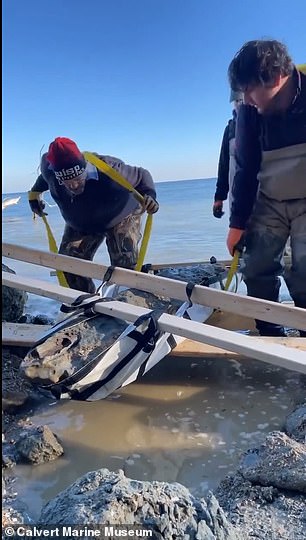 It took a team of men months to extract the whale skull from the sediment. The crew hoisted the whale skull on wooden planks to free it from the sand, took it down the shoreline on a pontoon boat and loaded the fossil into a truck headed for the museum.

The artifact, larger than her hand, once belonged to a 50-foot-long megalodon that lived more than 2.6 million years ago.

Sampson said her daughter found over 400 teeth, but the five-inch one pulled from the water last month is the largest.

Molly told her mother that she hopes other kids see how fun exploring is and will go on their own adventures.

The museum said that it took two months to extract and move the skull, which was encased in a hardened block of sediment and weighs around 650 pounds (295 kilograms). 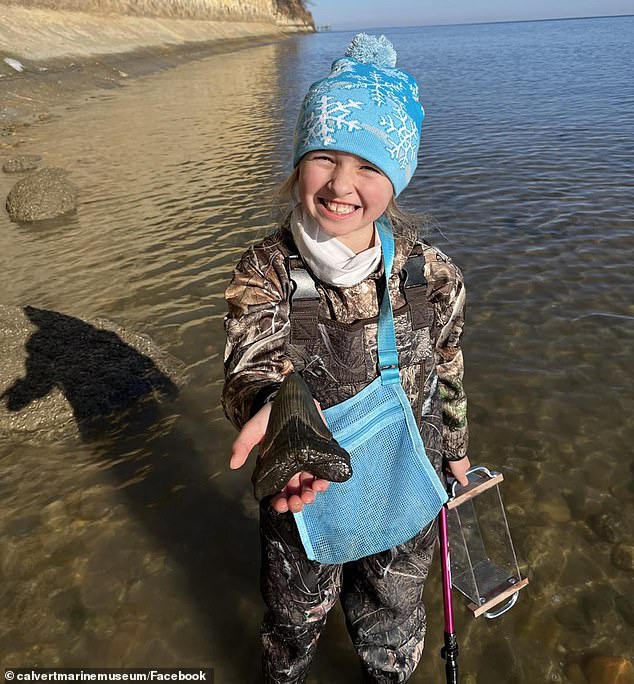 Molly Sampson, 9, strapped on a pair of fishing waders Christmas Day and headed out to the Chesapeake Bay to search for ‘the Meg’. She found a five-inch tooth in the shallow waters

It is the most complete fossil whale skull ever recovered in the Calvert Cliffs area, according to the museum, and has been christened “Cody” for its finder.

Godfrey said the skull has been moved to the museum’s Fossil Preparation Lab and specialized tools will be used to remove the sediment that encases most of it, a process that will take many months.