Fireball which lit up skies over Scotland last night was SPACE JUNK that likely landed in the Atlantic south of the Hebrides, experts say

A ‘brilliant fireball’ seen in the skies above parts of Britain is believed to have been space debris, experts have said.

The UK Meteor Network said it received almost 800 reports after the blazing orb was spotted in the night sky on Wednesday night.

The organisation said that having studied many videos of the incident, it is now of the opinion ‘this was space debris’.

It comes after people spotted the ball of light in the skies above parts of Scotland, northern England and Northern Ireland.

The network tweeted: ‘There have been nearly 800 reports of the fireball that was seen over UK last night.’

It said the preliminary trajectory has been calculated by the International Meteor Organisation, and this ‘indicates that the object, which we now believe to be space debris, would have landed in the Atlantic south of the Hebrides’. 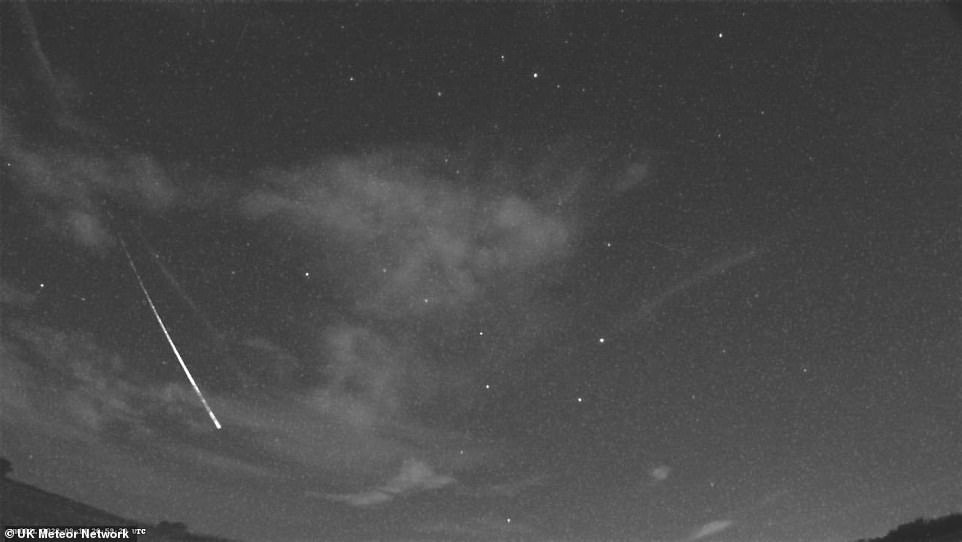 A ‘brilliant fireball’ seen in the skies above parts of Britain is believed to have been space debris, experts have said 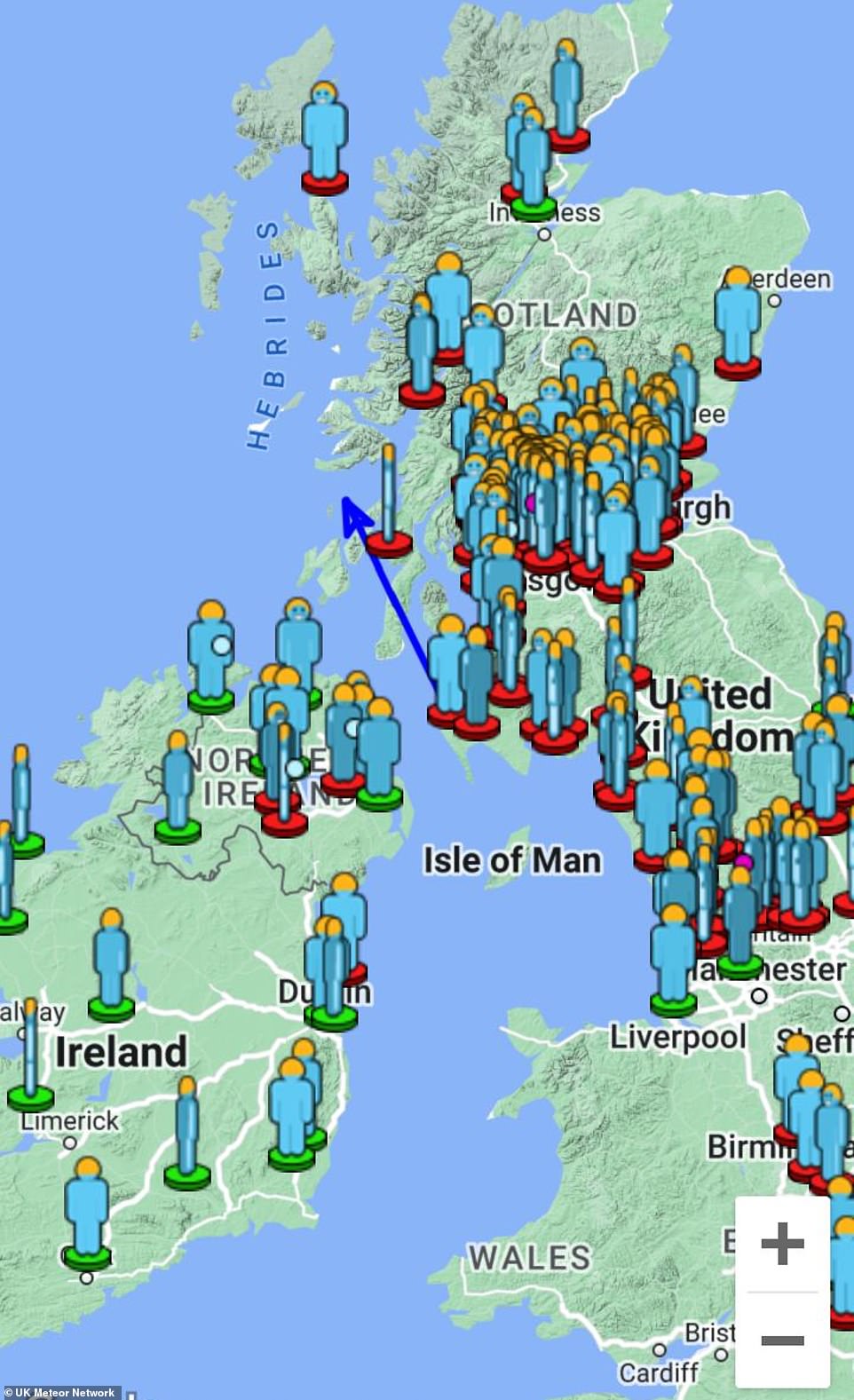 Where did the space debris come from?

While the source of the space debris remains unclear, the network suggests that it may be from SpaceX’s Starlink satellites.

It tweeted a photo to SpaceX’s CEO, Elon Musk, writing: ‘Hey Elon Musk is this one of yours?’

While Musk is yet to respond, SpaceX has previously been blamed for other space debris falling to Earth.

For example, last month, The Australian Space Agency confirmed that space debris found in the Snowy Mountains in southern New South Wales belonged to a craft built by SpaceX.

Reports starting coming in at about 9pm on Wednesday, mainly from Scotland and Northern Ireland.

Danny Nell, 21, was walking his dog in Johnstone, near Glasgow, when he saw the fireball.

He said: ‘It was strangely enough 10pm on the dot, and I just saw the flash in the sky and pulled out my phone and recorded it.

‘I thought it may be a firework at first because there was a lot of Scottish football on, but quickly realised it wasn’t and just grabbed my phone to see if I could catch it.’

Steve Owens, an astronomer and science communicator at the Glasgow Science Centre, saw the fireball as it passed over.

He told BBC Radio Scotland’s Good Morning Scotland programme: ‘It was incredible. I was sitting in my living room at exactly 10 o’clock last night and saw out of the window, due south, this brilliant fireball, this meteor streaking across the sky, and I could tell that it was something special because I could see through broken cloud.

‘It wasn’t perfectly visible; I could see that it was fragmenting, breaking apart, there were little bits coming off it.

‘Normally, if you see a meteor or a shooting star, they are just tiny little streaks of light, they last for a fraction of a second.

‘This one was streaking across the sky for at least 10 seconds – probably longer than that – and it travelled from due south all the way across to the west, so it was a pretty incredible sight.’

He said it is possible it could have landed but added it is ‘highly unlikely’ to have done so in Scotland.

He said: ‘Normally these tiny little streaks of light, these little shooting stars, they all burn up and everything just vanishes and evaporates in the atmosphere, but the thing last night was bigger than a little bit of dust.

‘The one last night might have been the size of a golf ball or maybe a cricket ball, maybe bigger than that, so it’s certainly not impossible that bits could have landed.’

While the source of the space debris remains unclear, the network suggests that it may be from SpaceX’s Starlink satellites.

It tweeted a photo to SpaceX’s CEO, Elon Musk, writing: ‘Hey Elon Musk is this one of yours?’

While Musk is yet to respond, SpaceX has previously been blamed for other space debris falling to Earth.

For example, last month, The Australian Space Agency confirmed that space debris found in the Snowy Mountains in southern New South Wales belonged to a craft built by SpaceX.

Space junk poses a major threat to all space vehicles, including the International Space Station, which has humans on board.

‘There are approximately 23,000 pieces of debris larger than a softball orbiting the Earth,’ NASA explained.

‘They travel at speeds up to 17,500 mph, fast enough for a relatively small piece of orbital debris to damage a satellite or a spacecraft.

‘There is even more smaller micrometer-sized (0.000039 of an inch in diameter) debris.’

According to the National Environmental Satellite Data and Information Service, a total of 200-400 pieces of space junk enter Earth’s atmosphere every year – about one every day. 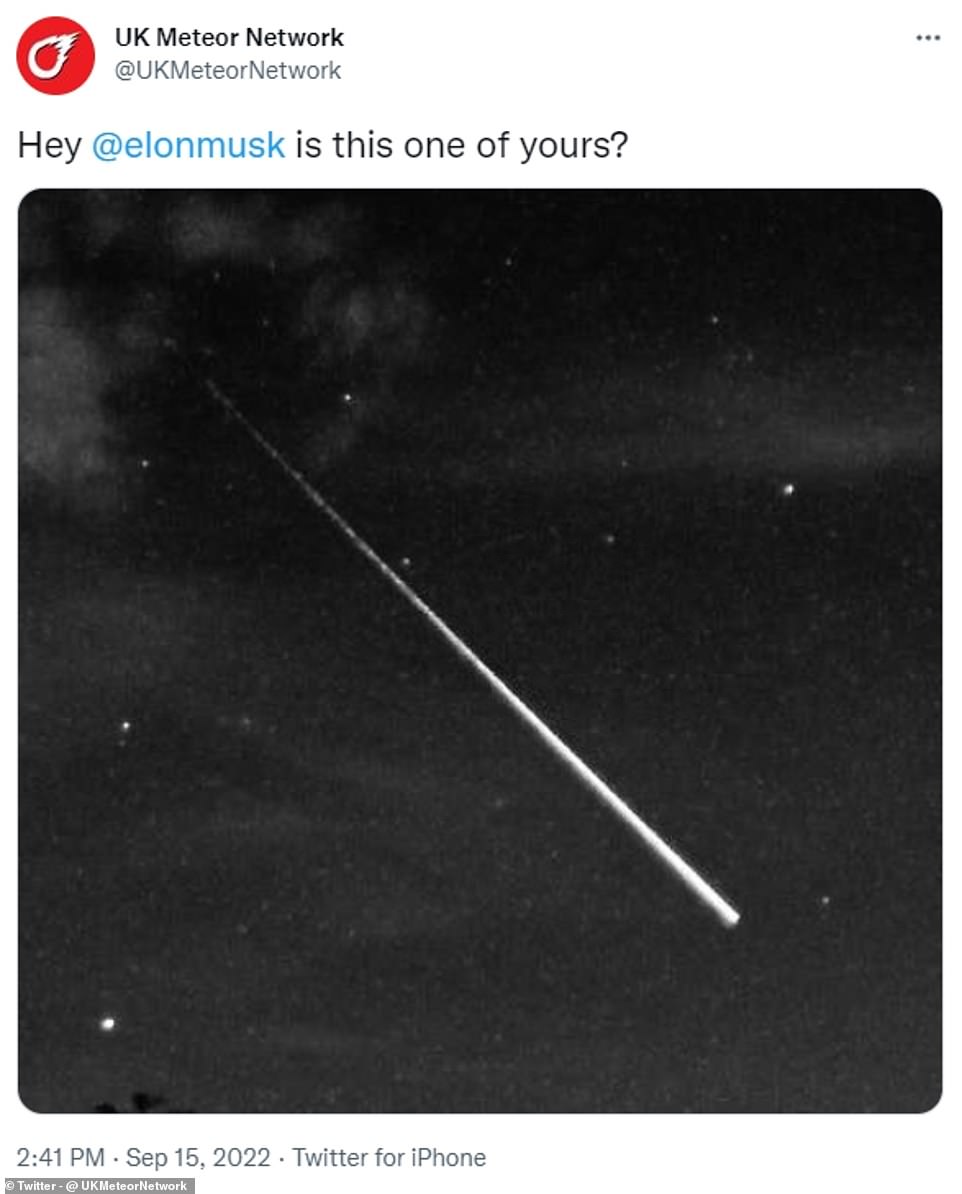 While the source of the space debris remains unclear, the network suggests that it may be from SpaceX’s Starlink satellites

‘Thankfully human populations are rarely affected by things falling from the sky (from outer space). This is largely a numbers game,’ it explained.

‘Human populations live on a small percentage of the Earth’s total surface area.

‘So any objects that do not burn up and disintegrate upon atmosphere re-entry are likely to fall into the ocean (which covers over 70 per cent of the surface of the Earth) or a sparsely populated land area.’

However, scientists have warned there is a 10 per cent chance that an out-of-control rocket or spacecraft could kill someone within the next decade.

They analysed the risk to human life of objects plummeting to the ground after re-entering the Earth’s atmosphere.

Under current practices, the researchers found that if a typical rocket re-entry spreads debris across a 10 m2 area then there is roughly a 1 in 10 chance that one or more casualties will occur over the next 10 years.

They also said there was a higher risk to those living in the global south, with errant parts three times more likely to land at the latitudes of Jakarta, Dhaka and Lagos than those of New York, Beijing or Moscow.