Scores of dead fish were being cleaned up from beaches in Pinellas County, Florida, this week, the result of “red tide” conditions in the area, according to a report.

“We’re covering all of Pinellas County, all 35 miles of beachline, all of the intercoastal waterways,” cleanup contractor Jay Gunter of DRC Emergency Services told FOX 13 of Tampa Bay. “Anything where the red tide fish kill might have had an effect, we’re cleaning them.”

Pinellas County, with a population of nearly 1 million people, lies just west of Tampa on Florida’s Gulf Coast and includes communities such as Clearwater and St. Petersburg.

The area has seen a period of “red tide,” a natural occurrence in which algal blooms discolor the water and lead to a high presence of microorganisms, resulting in fish kills. Red tide can often affect the quality of shellfish that humans may consume afterward, resulting in a risk of illness. 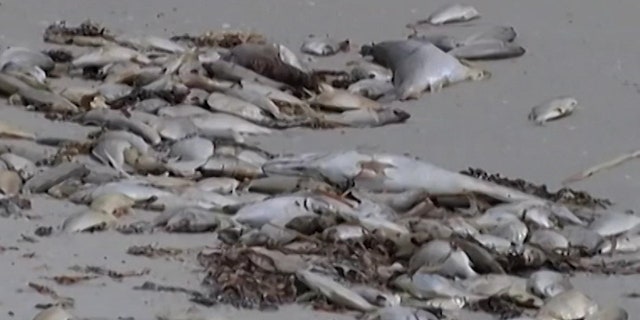 Dead fish are seen washed up by red tide.

Hillsborough and Manatee counties also have been affected, according to FOX 13.

The red tide conditions included a massive algal bloom about a mile and a half off northern Clearwater Beach that scientists were able to observe in an aerial view, the station reported.

“It’s about a 400-yard in diameter bloom out there,” Gunter told the station. “Pieces will break off, and that will happen, but you know the red algae, that’s a natural living organism, so it’s feeding off of fish, or anything that it can nutrients and living out there.”

Officials in Pinellas County say they expect bloom activity to move north and last for about another week. Meantime, they’ll have equipment and contractors deployed to keep beaches as clean as possible, FOX 13 reported.

clean, florida, prompts, Red, Tide
You may also like: