All-electric flying car takes to the sky in Dubai: XPeng X2 that will cost the same as a luxury car and can whisk tourists around cities at speeds of up to 80mph ‘could be the future of sightseeing’

A flying car could whisk tourists around cities at speeds of up to 80mph in just a few years’ time, a company has claimed.

The all-electric XPeng X2 is expected to stick to an altitude of roughly 300ft – around the height of Big Ben.

But the two-seater, which can be flown remotely, can also reach as high as the Empire State Building.

For those worried about its 35-minute maximum flight time, it also has a parachute attached in case of any mishaps.

Chinese firm XPeng believe it would be ‘perfect’ for short-distance city journeys, such as sightseeing and transporting medical supplies.

It is expected to cost the same as a luxury car, such as a Bentley or Rolls Royce, and come to market by 2025. 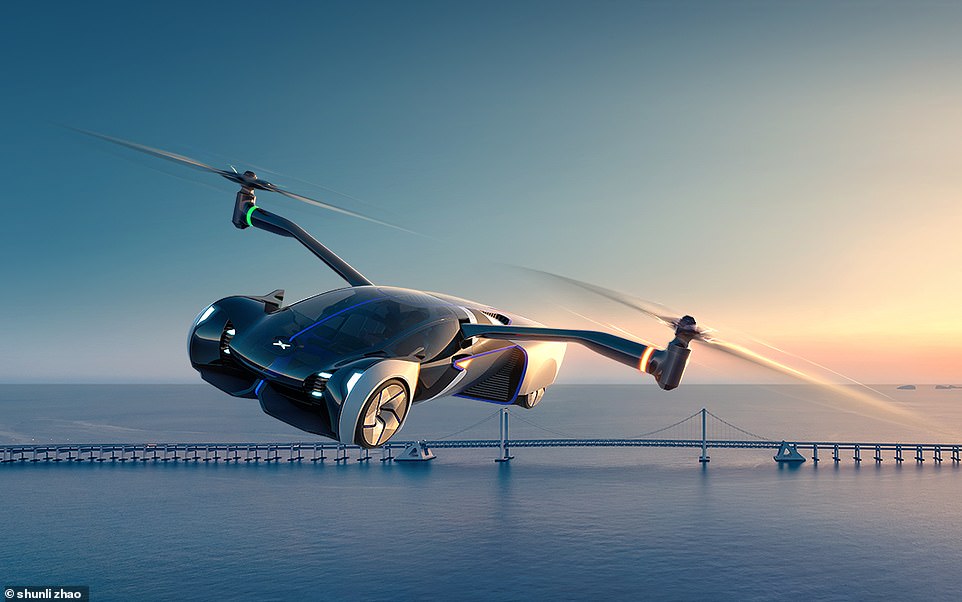 X2 XPeng has an enclosed cockpit with a minimalist teardrop-shaped design and a sci-fi appearance. In order to reduce weight, it has a complete carbon fibre structure 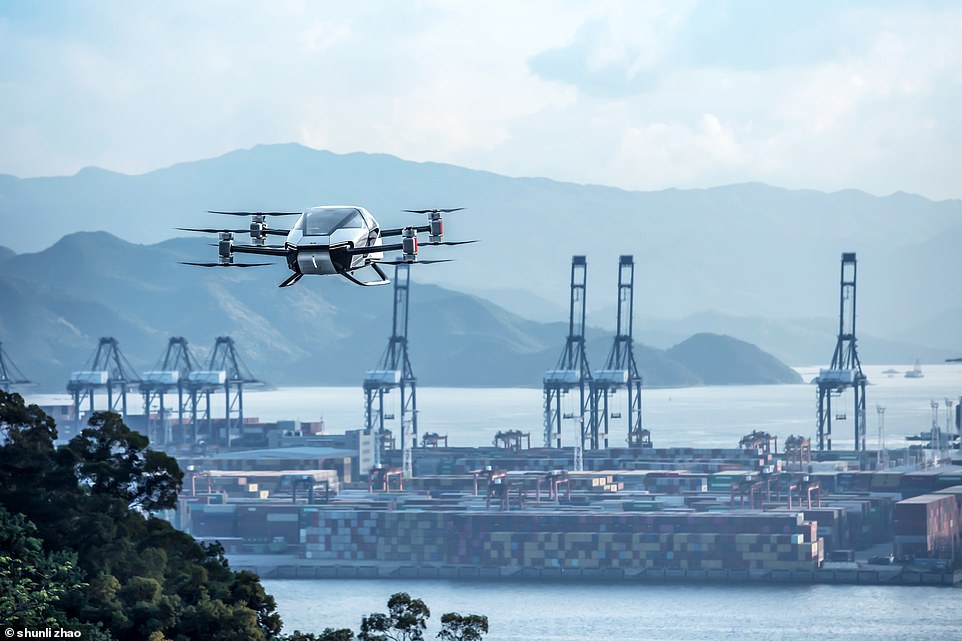 Like a helicopter, the X2 takes off and lands vertically using two propellers on each four corners of the vehicle where the wheels would usually be 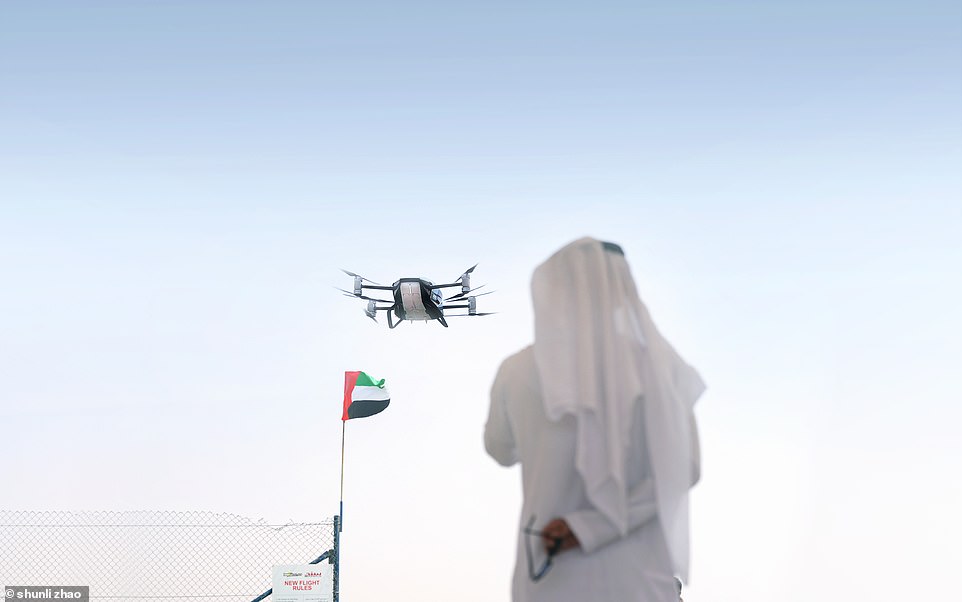 Seats: Two passengers (weighing no more than 16st each)

Cost: Similar to a luxury car, like a Bentley or Rolls Royce

Available: Expected to be 2025

Propellers: Eight – two on each for corners

Brian Gu, president and vice-chairman, said the ultimate aim was for it to be used by wealthy individuals as their day-to-day mode of transport.

But, with several regulatory hurdles still to cross, he said the vehicle would likely first be contained to the ‘outskirts of cities or on scenic strips’.

This could include Dubai’s seafront, where it made its first public flight on Monday as part of Gitex Global event.

Like a helicopter, the X2 takes off and lands vertically using two propellers on each four corners of the vehicle where the wheels would usually be.

With two doors that rise up either side, the 16ft long vehicle weighs around half a ton and carry two people weighing just under 16st each.

Owners are expected only to require a driver’s licence as the initial flying will likely have to be done autonomously, Mr Gu said.

He said: ‘If you want to control the vehicle, you will probably need to get some certification, a certain level of training.’

Asked whether the vehicle could be used by emergency services, he said: ‘I think these are all scenarios that can be tackled was a flying car.’

But he said the company was not yet focusing on ‘specific use’ and instead making their design a ‘reality first’.

The XPENG X2 does not produce any carbon dioxide emissions during flight, making it suitable for future low-altitude city flights such as sightseeing and medical transportation 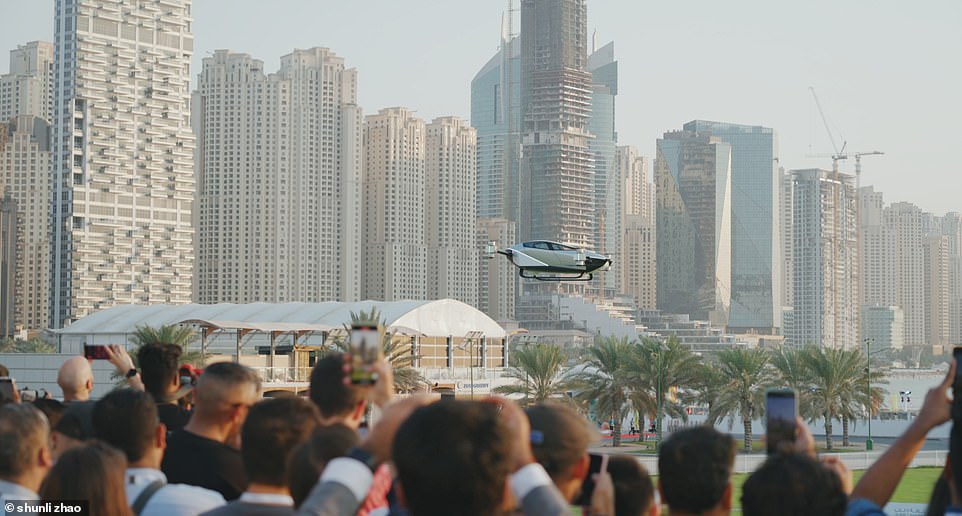 The XPENG X2 is equipped with two driving modes: manual and autonomous. Owners are expected only to require a driver’s licence as the initial flying will likely have to be done autonomously 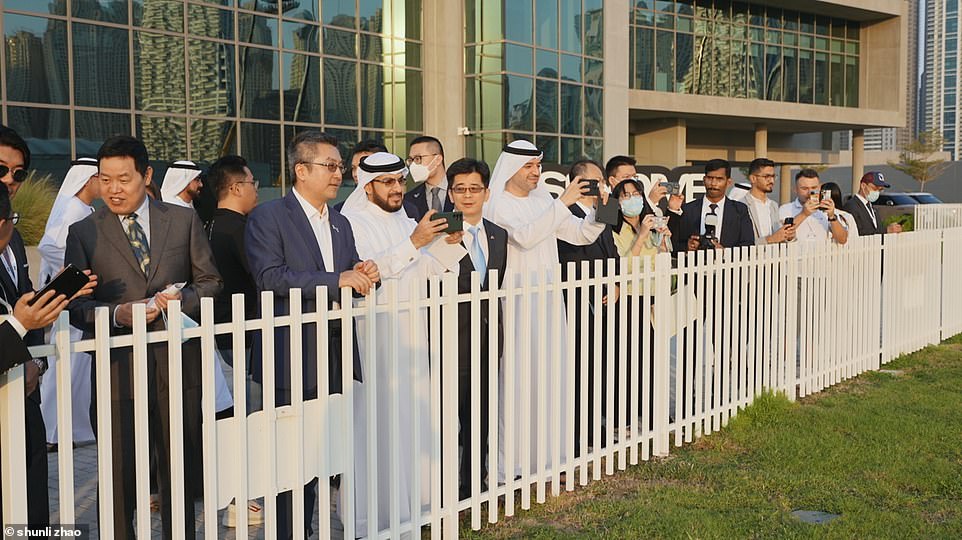 XPeng’s first public flight was witnessed by over 150 attendees, including representatives from the Chinese Consulate in Dubai, the Dubai International Chamber of Commerce, the DCAA, the Dubai Department of Economy and Tourism, the Dubai World Trade Centre and global media

Mr Gu added that the ‘testing version has an active parachute that will automatically deploy, but future models will have more safety measures.’.

Mr Gu said the company was aiming to have the vehicle ready for customers by 2025 – but they aware that it might take time for consumers to feel comfortable with flying cars.

He said: ‘I think once there’s enough on the road and being seen in cities around the world, I think that that will expand the market quickly.

Billions of dollars worth of investment have been poured into the eVTOL (electric vertical take-off and landing) sector as companies race to be the first commercial success.

Take-off for air taxis! NASA is testing an electric aircraft that takes off and lands vertically – and could shuttle passengers at 200mph across busy cities by 2024

NASA is testing a new electric aircraft that can take off and land vertically, in the hope that by 2024 will be able to shuttle passengers across busy cities at 200mph.

The Joby Aviation vehicle could one day serve as an air taxi service for those in cities and surrounding areas, adding an alternative mode of transport for people and goods, according to the NASA team working in Big Sur, California.

The all-electrical ‘flying taxi’ can take off and land vertically and is a helicopter powered by six rotors designed to be as quiet as possible.

The 10 day study started on September 1, and will see officials from the NASA Armstrong Flight Research Center test its performance and acoustics.

The electrical vertical take off and landing (eVTOL) vehicle is the first in a number of aircraft that will be tested as part of NASA’s Advanced Air Mobility (AAM) campaign to find future rapid modes of transport that could be approved for public use.