A roarsome find! Fossil of a young duck-billed hadrosaur covered in scaly skin discovered in Canada could be a rare complete dinosaur skeleton, scientists claim

A dinosaur fossil discovered partially buried within a hillside could be a rare complete skeleton, researchers say.

The exposed fossil of a hadrosaur – a large, plant-eating, duck-billed species – was found in the Dinosaur Provincial Park of Alberta, Canada.

All that can be seen is a large portion of the tail and right hind foot, but the animal is sitting in a way that suggests the entire skeleton could be preserved within the hill.

Complete with fossilised skin, the remains were discovered during a visit by ecologists from the University of Reading in 2021.

As entire skeletons are very rare, the specimen is likely to provide information about what the dinosaur looked like and its anatomy.

Dr Brian Pickles said: ‘This is a very exciting discovery and we hope to complete the excavation over the next two field seasons.’ 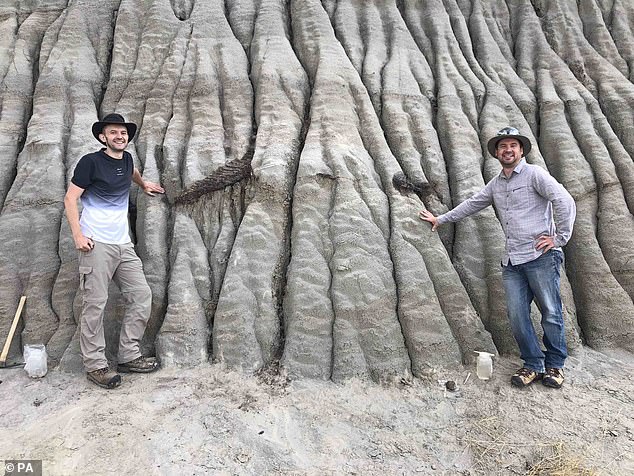 The exposed fossil of a hadrosaur – a large, plant-eating, duck-billed species – sticks out from a hillside in the Dinosaur Provincial Park of Alberta, Canada 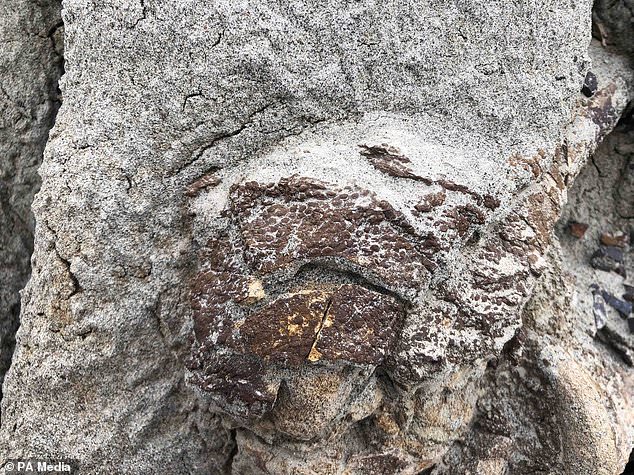 Complete with fossilised skin, the remains were discovered during a visit by ecologists from the University of Reading in 2021

Hadrosaurs are known as the duck-billed dinosaurs because of the flat duck-bill appearance of the bones in their snouts.

The species was plant-eating and lived from 75 to 65 million years ago.

Paleontologists say hadrosaurs may have been able to outrun a T-rex.

He added: ‘Based on the small size of the tail and foot, this is likely to be a juvenile.

‘This means the find could help palaeontologists to understand how hadrosaurs grew and developed.’

Hadrosaurs – a name derived from the Ancient Greek for ‘stout lizard’-  are known as the duck-billed dinosaurs because of the flat bill-like appearance of the bones in their snouts.

They were herbivores, and lived between 75 and 65 million years ago in the Late Cretaceous Period.

Examples of hadrosaurs include Parasaurolophus, which had a long, backward-curving crest on its head and appears in the 2022 film ‘Jurassic World Dominion’, and Edmontosaurus, that had a crest made from soft tissue like a rooster.

Dr Pickles was leading a search of the area when a volunteer crew member named Teri Kaskie noticed part of a fossil skeleton protruding from a hillside.

Dr Caleb Brown, from the Royal Tyrrell Museum, said: ‘Hadrosaur fossils are relatively common in this part of the world but another thing that makes this find unique is the fact that large areas of the exposed skeleton are covered in fossilised skin.

‘This suggests that there may be even more preserved skin within the rock, which can give us further insight into what the hadrosaur looked like.’

It may take several months to collect the entire skeleton, and once it is it will be delivered to the Royal Tyrrell Museum’s Preparation Lab, where technicians will work to uncover the fossil.

They will determine how well-preserved it is, whether the entire skeleton is there, and how much of the skin is preserved.

Identifying the exact species of duck-billed dinosaur will only be possible if a skull is discovered.

Based on the size and preservation of the specimen, fully preparing it for research and display may take several years.

In collaboration with the Royal Tyrrell Museum, the team is working together to excavate the skeleton while protecting the exposed fossil.