Look up tomorrow! Full Harvest Moon will peak on Saturday morning ahead of the official start of autumn

If you’re a fan of stargazing, make sure you set your alarm for tomorrow morning.

This particular full moon is the closest one to the autumn equinox, which is on September 23 this year.

The full moon itself isn’t the only thing you should keep an eye out for tomorrow – Jupiter and Saturn will also be visible on Saturday night, according to NASA. 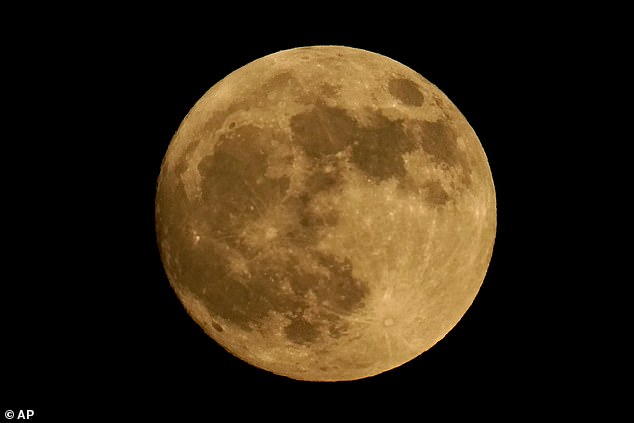 A full moon occurs when the moon is opposite the sun, as viewed from Earth, revealing the Moon’s dayside.

As this particular full moon is closest to the autumnal equinox, it’s widely known as the Harvest Moon.

‘During the fall harvest season farmers sometimes need to work late into the night by moonlight (especially before the introduction of artificial lights),’ NASA explained.

‘Other European names for this full moon are the Fruit Moon, as a number of fruits ripen as the end of summer approaches, and the Barley Moon, from the harvesting and threshing of barley.’

While the moon won’t appear any bigger or brighter than usual, you may notice the moon rising earlier than expected.

‘On average moonrise is about 50 minutes later each night,’ NASA said.

‘Around the Harvest Moon, this time is shorter, about 25 minutes for the latitude of Washington, D.C., and only 10 to 20 minutes farther north in Canada and Europe.’

If you miss the peak tomorrow morning, don’t worry – you’ve still got time to see it.

According to NASA, the moon will appear full through until Sunday morning.

Aside from the full moon, eagle-eyed stargazers will also have the opportunity to see Jupiter, Saturn, and the bright star Vega in the night sky this weekend.

‘On the evening of Saturday, Sept. 10, 2022 (the day of the full moon), as evening twilight ends, the rising moon will appear 4 degrees above the eastern horizon,’ NASA advised. 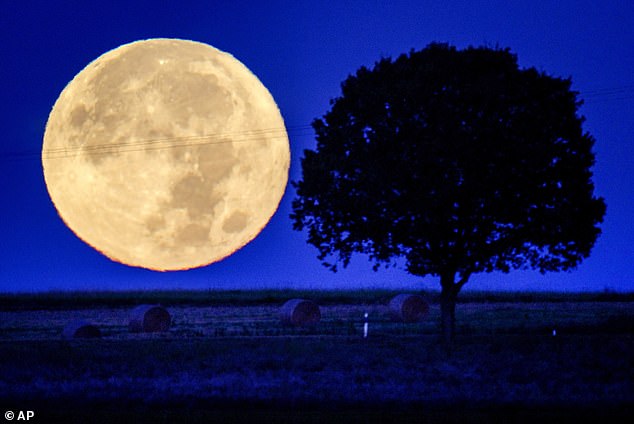 If you miss the peak tomorrow morning, don’t worry – you’ve still got time to see it. According to NASA, the moon will appear full through until Sunday morning

‘Jupiter will appear to the left of the Moon less than 3 degrees above the horizon.

‘Saturn will appear 21 degrees above the southeastern horizon.’

‘The bright star Vega will appear almost exactly overhead at 89.5 degrees above the horizon.’

Vega is the fifth brightest star in our night sky, about 25 light-years from Earth.

It has twice the mass of our Sun, and shines 40 times brighter than our Sun.

While the Harvest Moon is the closest one to the official start of Autumn, there’s still a few weeks to go before the Equinox itself.

‘The astronomical calendar determines the seasons due to the 23.5 degrees of tilt of the Earth’s rotational axis in relation to its orbit around the Sun,’ the Met Office explains on its website.

‘Both equinoxes and solstices are related to the Earth’s orbit around the Sun.’

The phases of the moon

Like Earth, the Moon has a day side and a night side, which change as the Moon rotates.

The Sun always illuminates half of the Moon while the other half remains dark, but how much we are able to see of that illuminated half changes as the Moon travels through its orbit. 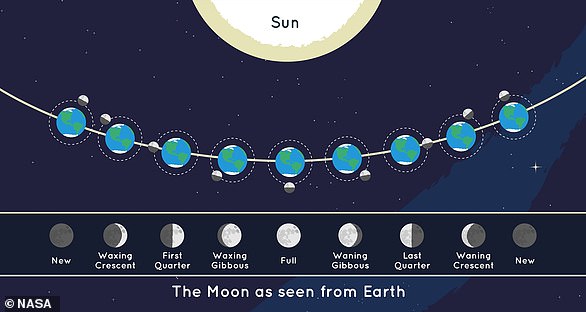 In the Northern Hemisphere, the phases of the moon are:

This is the invisible phase of the Moon, with the illuminated side of the Moon facing the Sun and the night side facing Earth.

This silver sliver of a Moon occurs when the illuminated half of the Moon faces mostly away from Earth, with only a tiny portion visible to us from our planet.

The Moon is now a quarter of the way through its monthly journey and you see half of its illuminated side.

Now most of the Moon’s dayside has come into view, and the Moon appears brighter in the sky.

This is as close as we come to seeing the Sun’s illumination of the entire day side of the Moon.

As the Moon begins its journey back toward the Sun, the opposite side of the Moon now reflects the Moon’s light.

The Moon looks like it’s half illuminated from the perspective of Earth, but really you’re seeing half of the half of the Moon that’s illuminated by the Sun ― or a quarter.

The Moon is nearly back to the point in its orbit where its dayside directly faces the Sun, and all that we see from our perspective is a thin curve.