Giant Jurassic dinosaur was a scavenger, not a predator, study finds

Not so scary after all! Giant Jurassic dinosaur Allosaurus was a SCAVENGER ‘similar to today’s vultures’ – and not an active predator as previously thought, study finds

Allosaurus, the giant Jurassic dinosaur, was a scavenger and not a predator as previously thought, according to a new study that may ‘overturn 150 years of established thought’.

Measuring up to 40 feet tall, the beast likely got most of its calories by scavenging on the carcasses of enormous, four-legged, long-necked herbivorous dinosaurs called sauropods that lived alongside it.

Given the enormous supply of decaying sauropod flesh, Allosaurus was under no pressure to overpower prey and may have evolved to be a ‘terrestrial vulture’.

Allosaurus did not evolve powerful bite forces or ‘advanced cursorial adaptations’ the study authors say – in other words, limbs adapted for running to catch feeling prey.

They also lacked binocular vision, known as stereopsis – the perception of depth produced by the brain when it receives visual stimuli from both eyes in combination. 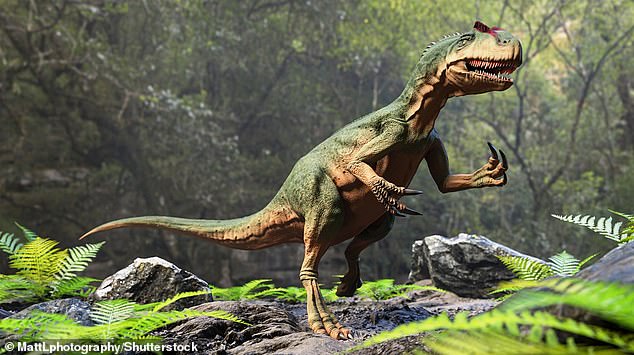 Allosaurus (pictured), which was a massive carnivore, rivalling T. rex in stature – but its feeding habits were quite different from the famous T. rex, the new study suggests

The Allosaurus lived between 155.7 and 150.8 million years ago in the late Jurassic period.

Its name means ‘different lizard’ in Greek because its hollow vertebrae were considered distinct from other dinosaur species known at the time of first discovery in 1877.

It had dozens of sharp, serrated teeth and arms with long claws, longer than a T-rex’s.

The dinosaur hunted large herbivores and fossil evidence shows it clashed with Stegosaurus.

The study was conducted by Cameron Pahl and Luis Ruedas, researchers at Portland State University in Oregon, who claim to be upending a century and a half of established thought on the genus.

‘Allosaurus and relatives have been considered apex predators for more than 100 years, but our model demonstrates that these dinosaurs may have evolved to fill a different niche altogether,’ they said in their paper.

‘Carrion [dead flesh] generated by their whale-sized sauropod neighbors may have been abundant enough to support them as obligate scavengers.’

The experts suggest that dinosaurs with limited access to dead flesh lying on the ground evolved to be vicious predators, such as T. rex.

These predators had to aggressively hunt down scarpering prey in the bid to stay alive.

‘The absence of sauropods in certain environments led to more obvious predatory adaptations in theropods such as tyrannosaurs, which evolved without access to significant sauropod carrion,’ they researchers explained.

‘This may have forced them to meet their energy budgets by hunting and pressured them to evolve differently.’

Allosaurus is a type of dinosaur dating from the Late Jurassic period (155 to 145 million years ago), that lived primarily in what is now North America.

Allosaurus remains have been found in the Morrison Formation – a series of sedimentary rocks spanning the Western United States, which is a fossil-hunting haven for researchers.

Like the famous T. rex, Allosaurus were theropods – a clade of dinosaurs characterised by hollow bones and three-toed limbs that walked on two legs.

Allosaurus were the largest meat-eating dinosaurs of their time and location, reaching up to 32 feet and weighing up to 2.5 tons (with some estimates up to 4 tons).

They also had a large head, as well as jaws that were filled with long, sharp, serrated teeth that were easily shed and continuously replaced. Also like T. rex, they had small upper arms and hands.

Together, these ‘superficial similarities’ to T. rex led to Allosaurus being thought of as the top predator of the Morrison Formation.

To learn more about whether this was true, the authors used a computer model that simulated the relationship between carcasses present in the Morrison Formation generated from the deaths of sauropods, and the food energy requirements of Allosaurus. 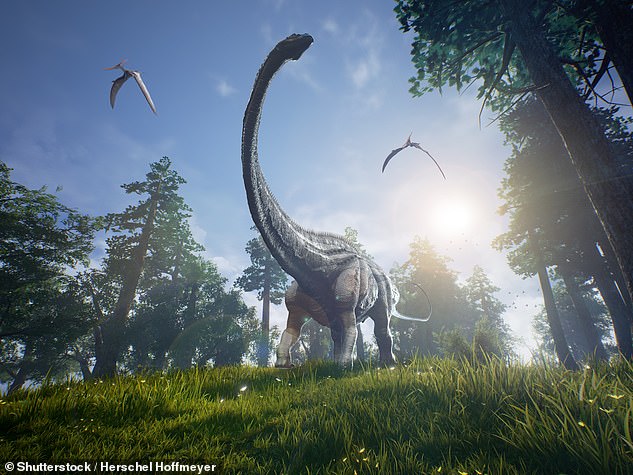 Sauropod dinosaurs (pictured) walked on four legs and had distinctive long necks. They were widespread – their remains have been found on all the continents except Antarctica. Their remains kept Allosaurus alive, this new study suggests

Stereopsis, or binocular vision, is the perception of depth produced by the brain when it receives visual stimuli from both eyes in combination.

When an animal stares at an object, the two eyes converge so that the object appears at the centre of the retina in both eyes.

Because the eyes of humans, and many animals, are located at different lateral positions on the head, binocular vision results in two slightly different images projected to the retinas of the eyes.

These disparities are processed in the visual cortex of the brain to yield depth perception.

For dinosaurs, it would have been crucial during hunting.

They also examined morphological attributes of the skull, including the extent of binocular vision in predators versus scavengers, as well as ecological data from fossils, such as relative population numbers in predators, herbivores and scavengers.

The relative fragility of the skull and dentition of Allosaurus had already cast doubt on Allosaurus being a predator.

But in addition to this shortcoming, Allosaurus did not have the binocular vision (stereopsis) required to be a successful predator, the team claims.

Allosaurus were contemporary in time and space with some of the largest herbivorous dinosaurs ever recorded.

These would have included well-known dinosaurs such as Camarasaurus, Barosaurus, Apatosaurus, Diplodocus, Brontosaurus, Supersaurus, and Brachiosaurus.

Brachiosaurus in particular once was considered the largest land animal to have ever lived and could have been up to 70 feet long and 64 tons in weight.

Supersaurus, meanwhile, were more than 110 feet in length and weighed up to 40 tons. 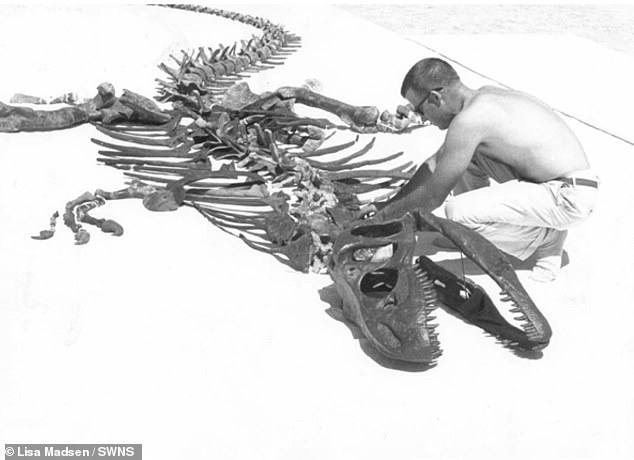 If these giant dinosaurs died primarily of natural causes, such as disease, starvation, and exhaustion, as is typical of many modern herbivore populations, their carcasses would have been plentiful enough to sustain Allosaurus even without these undertaking any predatory behaviors, the team conclude.

These new findings seem to go against results of a study published last year by prominent paleontologists, who named a new Allosaurus species – Allosaurus jimmadseni.

A. jimmadseni slashed its prey to death in the hunt for food, the study claimed, and had longer arms than the T.rex, making it an even better hunter.

The study has been published in Ecological Modelling.

They were widespread – their remains have been found on all the continents except Antarctica.

They had nostrils high up on their skulls – rather than being located at the end of the snout like those of so many other terrestrial vertebrates.

a, dinosaur, Giant, Jurassic, was
You may also like: