Meet Updown Girl: 10-year-old child buried in Kent in the 7th century was of West African descent – suggesting England was more diverse than previously thought in the Middle Ages

A 10-year-old child buried in Kent in the 7th century was of West African descent –suggesting England was more diverse than previously thought in the Middle Ages.

‘Updown Girl’ – so-called because she was laid to rest at Updown, near Eastry in Kent – was buried with a pot, a bone comb, a knife and a spoon.

Her African heritage came from her father’s side, possibly her grandad or great grandad, although she was likely part of an affluent family that lived in England. 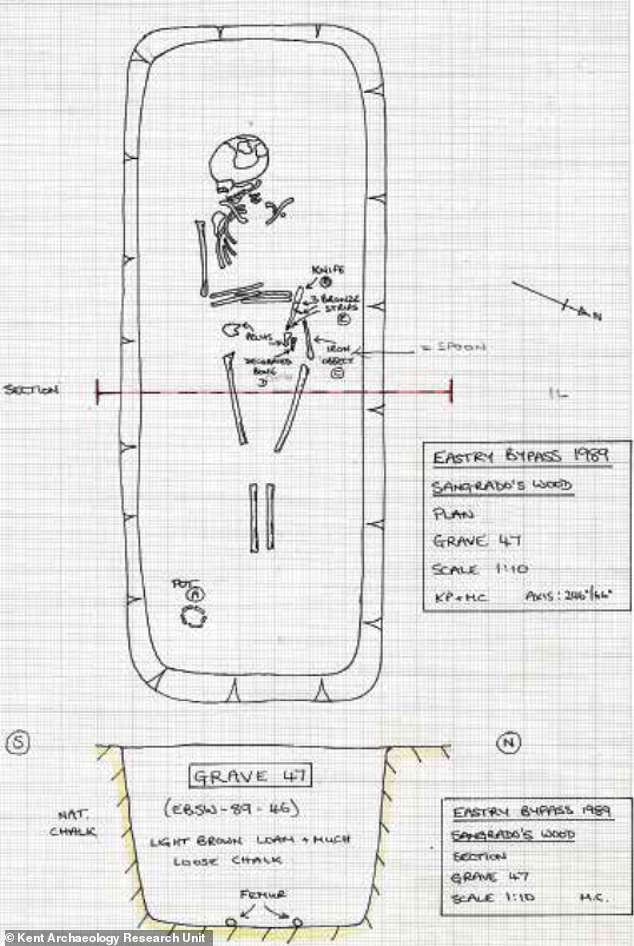 The excavator’s drawing of Updown Girl, Eastry Kent. She was accompanied by very typical grave goods – a pot, a bone comb, a knife, and a spoon

WHO WAS UPDOWN GIRL?

Updown Girl is one of 460 skeletons across 37 archaeological sites in Europe from which researchers have extracted ancient DNA.

She was dubbed Updown Girl because her remains were found near Updown farm in the village of Eastry, Kent.

Analysis suggests she was aged 10 or 11 when she died and was buried with typical grave goods – a pot, a bone comb, a knife and a spoon.

Her African heritage came from her father’s side, possibly her grandad or great grandad, researchers said.

The findings, published in a series of articles in Current Archaeology, come from one of the largest ancient DNA projects in Europe, involving 460 people who were buried in graves between 200AD and 1300AD, 278 of whom were from England.

‘Aged 10 or 11 when she died, this girl was buried in much the same way as the other early medieval individuals who were laid to rest at Updown, near Eastry,’ said Current Archaeology Editor Carly Hilts.

‘She was accompanied by very typical grave goods – a pot, a bone comb, a knife, and a spoon – and there was nothing to suggest that she had been treated differently, at least in death, even though the new genetic research highlights that her ancestry was very different to that of many of the people buried around her.’

Updown Girl is buried near two women who, according to the experts, are likely to be her great aunts with Northern European ancestry.

Both women were buried with several objects including belt hanging sets, beads, knives, combs and spoons, all suggesting they were part of an affluent family from the period.

The fact that both the women and the girl were buried in the same way indicates that despite her different ancestry, the girl was treated equally as her other family members, according to Professor Duncan Sayer, project leader and archaeologist from the University of Central Lancashire.

Of Updown Girl, Professor Sayer said: ‘We found the granddaughter of a migrant who is part of a family that is biologically Northern European.

‘She is buried in exactly the same way as everybody else… this story really highlights that if we are looking at ethnicity, did not matter to these people.’

Other notable findings include the remains of a teenage boy found at West Heslerton, an early medieval cemetery in Yorkshire. 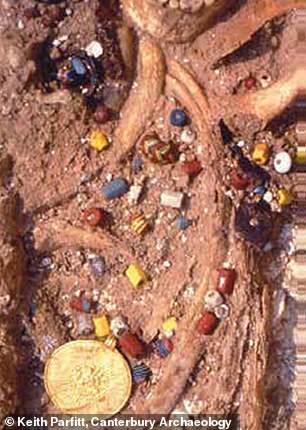 A gold bracteate and beads from a burial in Buckland near Dover, Kent

The boy had 100 per cent Northern European ancestry and was buried with an armed brooch, an object with origins in Scandinavia.

Researchers also found a gold bracteate – a type of medal – and beads from a burial in Buckland near Dover, Kent.

Elsewhere in East Anglia, at a cemetery site near to RAF Lakenheath, there is a double grave which included two adolescents, thought to be siblings.

The brother, estimated to be around 15 years old, is accompanied by a knife and buckle, and was buried next to is sister, aged around 12 years.

Nearby is a third burial, an older man found with a spear, knife and pottery sherd. DNA analysis indicates the older male was the adolescents’ father.

The researchers believe that given the man’s age, it is likely he was present at their burial.

The DNA study, which was published in Nature last month, challenges our understanding of the first ever English people, according to the researchers. 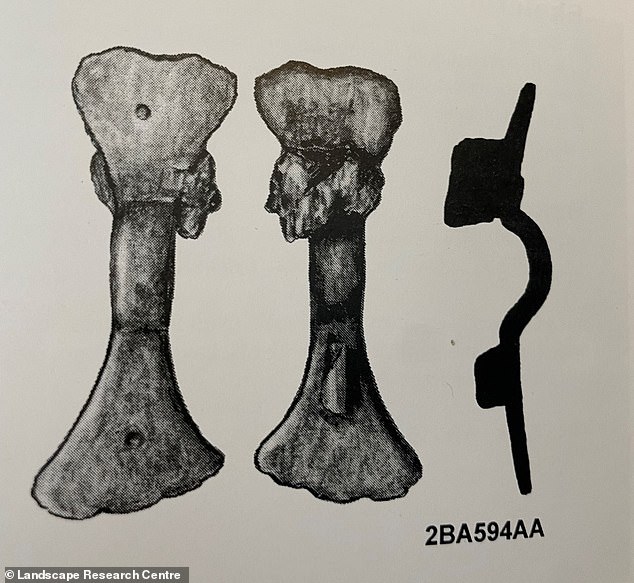 Sketches of an equal armed brooch found with skeleton in West Heslerton, a village in North Yorkshire 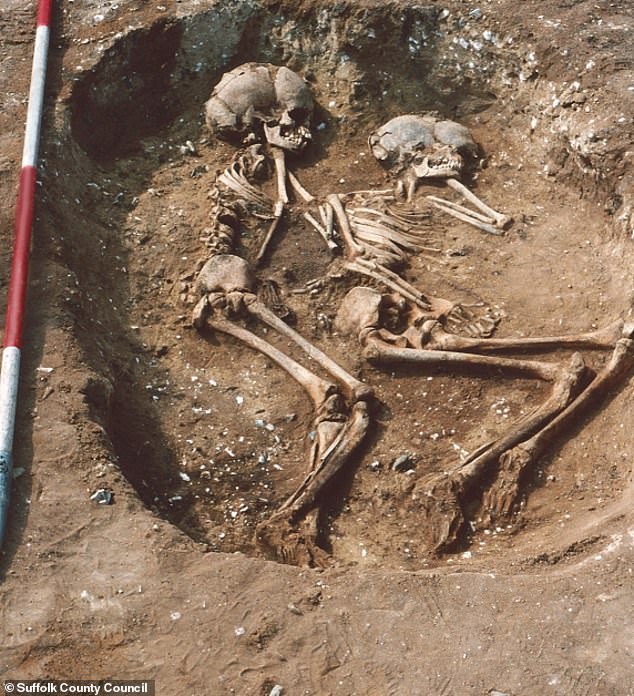 Elsewhere in East Anglia, at a cemetery site near to RAF Lakenheath, Suffolk, there is a double grave which included two adolescents, a boy of around 15 years accompanied by a knife and buckle, buried next to a girl aged around 12 years. Pictured, the two young siblings’ remains

They say there was a large-scale stream of migration from the Continental North Sea region into Eastern England during the Anglo-Saxon period, starting around 1,500 years ago.

In all, 76 per cent of the Early Medieval population in Eastern England was comprised of migrants whose ancestors originated from Continental regions bordering the North Sea.

New arrivals interbred with the existing population of Britain, but this integration varied enormously from region to region. 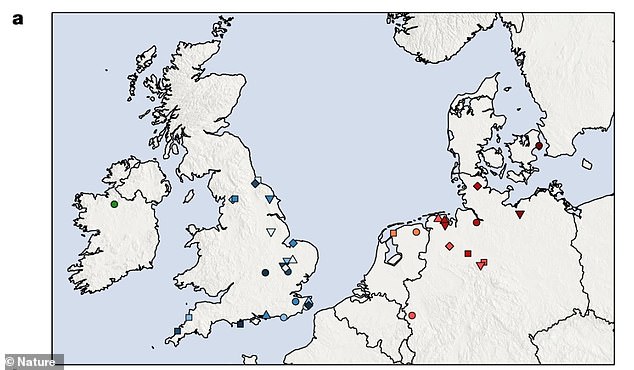 The findings come from one of the largest ancient DNA projects in Europe, involving 460 people who were buried in graves between 200AD and 1300AD, 278 of whom were from England. Pictured, the distribution of sites analysed in the study 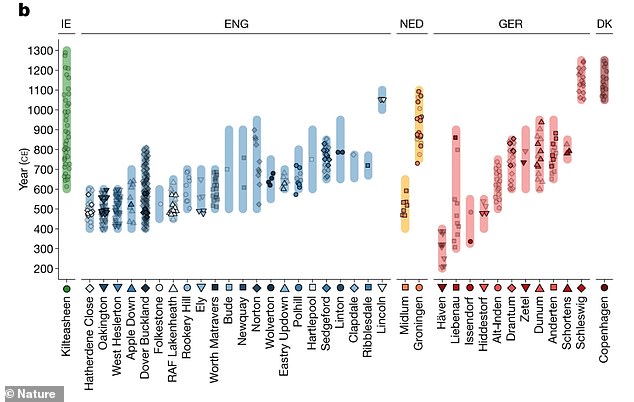 Key for the distribution of sites analysed in this study, as marked on the map above. DK, Denmark; ENG, England; GER, Germany, IE, Ireland; NED, Netherlands 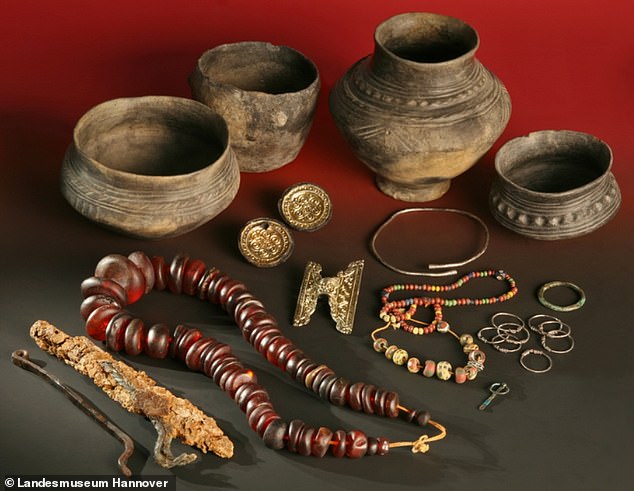 For example, at West Heslerton, an Anglo-Saxon cemetery in North Yorkshire excavated over several decades, most ancestry was from the Continent.

But at the contemporary post-Roman site of Worth Matravers in Dorset, there was almost no ancestry was from the Continent.

However, most of the Anglo-Saxon sites in eastern and southern England fell somewhere in between.

‘Our work shows that this migration cannot be understood as one single event; rather, it’s made up of many different threads – of individual people and families adapting to new circumstances across the regions of Britain,’ Professor Sayer said.

‘It is amazing being able to weave those threads together to create the fabric of their stories and in doing so, the rich and complex tapestry of our own past.’

MASS MIGRATION FROM FRANCE TO ENGLAND AND WALES 3,000 YEARS AGO DISPLACED ABOUT HALF OF THE ANCESTRY OF GREAT BRITAIN, STUDY CLAIMS

Mass migration from France to England and Wales around 3,000 years ago replaced about half of the ancestry of Great Britain, a 2021 study found.

Researchers examined the DNA of 793 ancient individuals from Bronze Age Britain, which began around 2,000 BC and lasted for nearly 1,500 years.

Results suggest people moving into southern Britain around 1300 BC to 800 BC were responsible for around half the genetic ancestry of subsequent populations.

These new migrants became thoroughly mixed in to the Southern British population in the period 1000 BC to 875 BC – likely a time of ‘intense and sustained contacts’ between many diverse communities, the researchers say,

Exact origins of the migrants cannot yet be established with certainty, but they are most likely to have come from communities in and around present-day France.

Researchers based their findings on newly-discovered and already-discovered ancient remains from British towns including Amesbury in Wiltshire, Lechlade in Gloucestershire, Ditchling Road in Brighton and Ulva Cave in Scotland.

DNA from these British samples were compared to ancient individuals recovered from parts of mainland Europe.