Goldfish are trained to 'drive' a robotic tank by scientists

This is NOT a fish tale! Goldfish are trained to ‘DRIVE’ a robotic tank by swimming in a certain direction to show they can navigate on land as well as in the water

In one of the weirdest scientific experiments yet, goldfish have been trained to ‘drive’ a robotic tank around a room.

Scientists in Israel constructed a ‘fish operated vehicle’ consisting of a water-filled tank, a camera and a computer on top of a set of wheels.

In tests, the onboard camera and computer were able to detect the fish’s position in real time and activate the vehicle motors to move the vehicle in the same direction.

Six goldfish were successfully trained to use the bizarre device and managed to find their way around the small room towards a food reward.

The results suggest that fish can adjust their navigation skills ‘to a wholly different terrestrial environment’, according to the researchers. 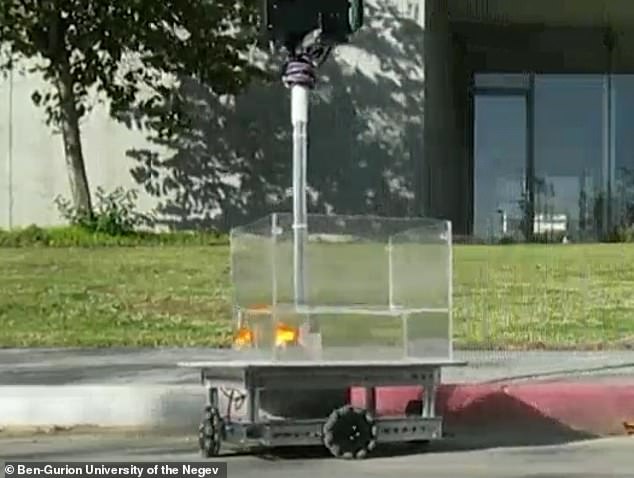 In one of the weirdest scientific experiments yet, goldfish have been trained to ‘drive’ a robotic tank around (pictured) 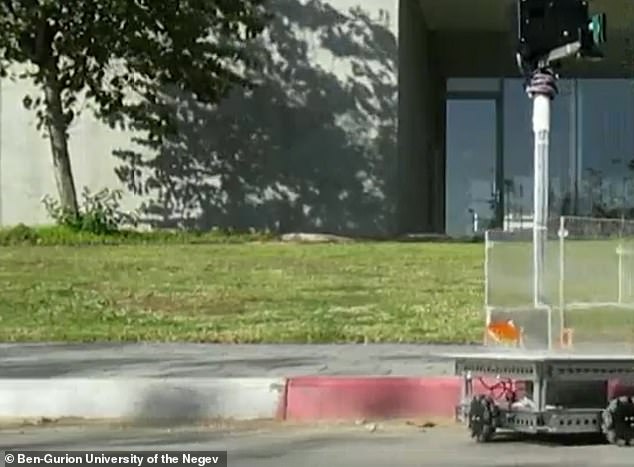 Scientists in Israel constructed a ‘fish operated vehicle’ consisting of a water-filled tank, a camera and a computer on top of a set of wheels

Researchers tested whether fish could ‘drive’ the vehicle towards a target in return for a food pellet reward.

Using an on-board camera and computer, the vehicle could detect the fish’s position in the water tank.

The vehicle could then react by activating the wheels such that the vehicle moved in the specific direction according to the fish’s position.

In this way, the vehicle’s reaction to the fish’s position allowed the fish to drive the vehicle in the environment.

Lidar prevented the vehicle from bumping into obstacles like walls.

The experiments were conducted by a team of researchers at the Ben-Gurion University in Beersheba, Israel and detailed in the journal Behavioural Brain Research.

‘We trained goldfish to use a fish operated vehicle (FOV), a wheeled terrestrial platform that reacts to the fish’s movement characteristics, location and orientation in its water tank,’ the authors said in their paper.

‘The fish were tasked to “drive” the FOV towards a visual target in the terrestrial environment, which was observable through the walls of the tank.

‘[Goldfish] were able to operate the vehicle, explore the new environment, and reach the target regardless of the starting point, all while avoiding dead-ends and correcting location inaccuracies.’

The researchers had wanted to take one species from its own environment and challenge it to perform behavioural tasks in a completely different environment.

They used six goldfish in their experiments, which were placed in the vehicle’s water tank in the middle of the testing arena.

The small arena had coloured corrugated boards that were placed on the walls to act as the target for the fish.

Every time the fish reached the target, which was defined as the moment the vehicle touched the corrugated board, a single food pellet was dropped into the water tank.

The water tank was then covered ‘to prevent any visual feedback to the fish’ and the FOV was driven manually back to the starting position for the next trial.

Initially, the six fish used in the experiments drove around at random, as expected, but the sessions were conducted three times a week every two days.

After time, the fish were able to drive the vehicle to any location in the terrestrial environment.

If the fish was located near a wall of the water tank while facing outward, the vehicle moved in that direction. However, if the fish was facing inward, no motion occurred. 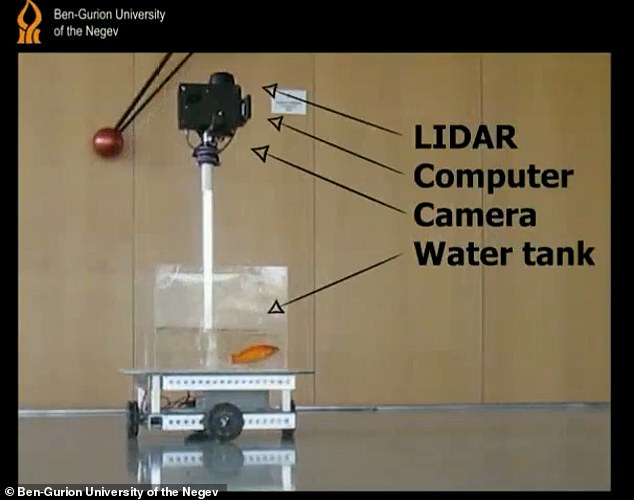 Scientists in Israel constructed a ‘fish operated vehicle’ consisting of a water-filled tank, a camera and a computer on top of a set of wheels (pictured)

Researchers also accounted for the issue of the vehicle coming too close to walls or other obstacles in the terrestrial environment.

The computer system could prevent any motion into avoid a collision if the apparatus came closer than 20 cm (7.8 inches) to such an obstacle, based on measurements from an on-board Lidar sensors.

LiDAR (light detection and ranging) is a remote sensing technology that measures distance by shooting a laser at a target and analysing the light that is reflected back.

Despite the seemingly-random nature of the experiments, the researchers claim to have shown that fish can overcome ‘environmental manipulation’.

If they somehow adapted to live live out of water, they could find their way to food to enable their survival, the findings suggest.

‘It goes without saying that fish, in general, are not naturally equipped to explore terrestrial environments,’ the authors added.

‘These behavioural results thus suggest a level of universality in space representation and navigation strategies.’

Pigs are capable of learning how to play simple video games, scientists demonstrated in 2021.

Researchers at Purdue University in Indiana taught four pigs to manipulate a joystick with their snouts, moving a cursor on a screen around to reach one of up to four target walls.

Each of the four pigs displayed some conceptual understanding of both the game and the connection between the movement of the joystick control and the cursor.

This was despite the fact that pigs are far-sighted animals with no opposable thumbs – a feat which the animal behaviour experts called ‘remarkable’.

The pigs did not quite match the level of skill achieved in the same video game task as primates have done previously, and could not be said to have fully mastered the concept, the team noted.

Read more: Scientists teach pigs how to play VIDEO GAMES, showing the animals are much more intelligent than previously thought

Captain Cook's HMS Endeavour is being eaen by shipworms

Paralympic swimmer gets bionic hand that can be updated remotely