Move aside Tiger Woods! Incredible video shows how a golfing ROBOT can navigate to a ball by itself and sink a putt

From delivering food to your door, serving us coffee and even removing cancerous tumors, robots can already complete a range of impressive tasks.

But now a robot has taken on the golf course, being able to navigate itself to a ball and even sink a putt.

Thanks to a 3D camera, the impressive robot dubbed Golfi can find golf balls and wheel itself into place before taking a shot.

The camera uses an algorithm to detect hard-coded objects, scan the area and find the ball. 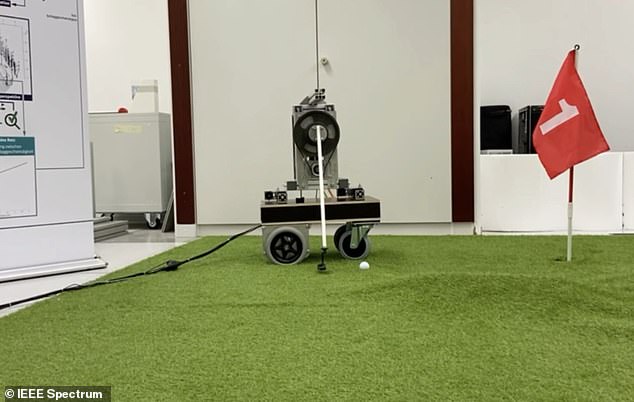 Golfi (pictured) was created by the Paderborn University in Germany. The robot can find a ball on the green and even sink a putt

A new robot, dubbed Golfi, has been created by PhD students at Paderborn University in Germany.

While it has been created to show the powers of hybrid robotic design, it gets 70 per cent of the shots it takes.

It works by using a 3D camera that scans and takes pictures of the green.

The weight of the ball and resistance of the turf are then analysed, which is then fed into a physics-based model.

This then works through 3,000 random shots from different positions to work out how hard the ball needs to be hit and in what direction.

Once it has been spotted, it takes a snapshot, which is then sent to a model to stimulate 3,000 random shots from different positions and starting points, the IEEE Spectrum reports.

This information is used to train a neural network that can predict exactly how hard to hit the ball and what direction to send it.

The robot considers data from the camera, which details the rolling resistance on the turf and how heavy the ball is.

It then lines its putter with the ball in the right position and takes a shot.

Golfi, which works by minimizing the number of ‘time-consuming interactions’ it needs, was created by doctoral student Annika Junker from the Paderborn University in Germany.

Despite its excellent putting skills, it was not created to boot pros like Tiger Woods off the golf course, but instead to show how powerful hybrid robotic designs can be, by combining physics based models with machine learning.

Explaining her robotic creation at the IEEE International Conference on Robotic Computing in Naples in December, she said: ‘It’s like how professional golfers often practice their strokes on a green the day before they play.’

During testing, Golfi did occasionally drive over the ball, but when this did not happen it was able to sink up to 70 per cent of the putts on a flat, two-square-metre, indoor green. 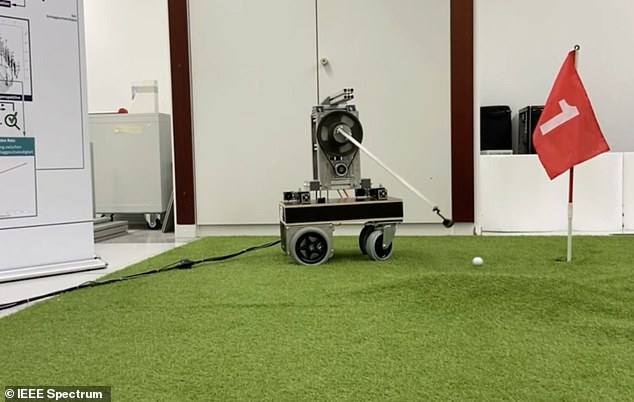 While Golfi occasionally drove over the ball, when this did not happen it was able to sink more than 60 per cent of the putts on a flat, 2-square-metre, indoor green

Ms Junker added: ‘We try to combine data-driven and physics-based methods and we searched for a nice example, which everyone can easily understand.

‘It’s only a toy for us, but we hope to see some advantages of our approach for industrial applications.’

After looking into the robot, Noel Rousseau, a golf coach with a PhD in motor learning told the IEEE Spectrum: ‘The most impressive part to me is that the golf robot is able to find the ball, sight the hole, and move itself into position for an accurate stoke.’

Co-creator of the robot Niklas Fittkau added: ‘You can also transfer that to other problems, where you have some knowledge about the system and could model parts of it to obtain some data, but you can’t model everything.’

This isn’t the first golf-playing robot to have been created.

The LDRIC robot hit a hole-in-one from a significant distance at a golf course in Arizona’s TPC Scottsdale course in the US in 2016.

LDRIC (which stands for Launch Directional Robot Intelligent Circuitry) is widely used in the golf industry to test new technology, being able to swing a club perfectly.

It also has the ability to replicate the faults in the average golfer’s swing, such as dreaded hooks and slices, so that club manufacturers can develop curbs more forgiving.

However, Golfi is the first golfing robot that does not need humans to set up the ball in front of them and program it to make the right swing.

‘World’s most advanced’ humanoid robot Ameca says she’ll have working legs in less than a YEAR, in ‘jaw-dropping’ new video

Your robot will see you now! Self-driving NHS ‘helper bot’ named Milton is being used to transport medicines around hospitals, as part of a new trial