The Naming of The Shrew! Greater white-toothed shrew spotted in Sunderland is deemed the first new mammal species in Britain since the 1920s

A Facebook picture of an unusual-looking animal caught by a cat has led to the discovery of the first non-native mammal to become established in the UK since the 1920s.

The Greater White-Toothed Shrew – which is described as looking similar to a character in children’s TV show The Clangers – has never before been found before on mainland Britain.

Ecologists are worried that the animal will wipe out populations of the UK’s Pygmy Shrews, as happened in Ireland, where they first appeared in 2007. 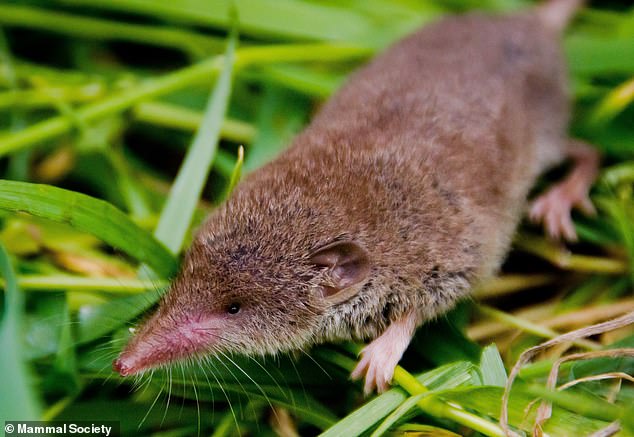 Greater White-Toothed Shrews on the continent are known as House Shrews as they are often found in homes and farm buildings.

In Ireland the shrews are spreading at around 3.1 miles a year, an astonishing distance for a small mammal.

Wherever it has spread in Ireland it appears to have led to the complete disappearance of the Pygmy Shrew, but it is unclear whether this will happen in the UK which has a ‘more complex’ ecosystem.

Shrews give birth to litters of between two and 11 young, known as shrewlets.

The animals can be aggressive towards strangers if scared, while their predators are barn owls, stoats and domestic cats.

The shrews are thought to have originated in Morocco, but crossed the straits of Gibraltar around 60,000 years ago, and have been spreading further north, through Spain to France ever since.

The world became alerted to the discovery after Melissa Young, a digital marketing executive in Sunderland, posted pictures of the new shrew, which had been caught by her cat in the garage.

The pictures were spotted by ecologist, Ian Bond.

Now, tests carried out by experts from the British Mammal Society confirm that it is a Greater White-Toothed Shrew, which is found in western continental Europe, on Guernsey, Alderney and Herm, and a small part of north Africa.

The Sunderland population of the shrew would be the most northerly anywhere in the world.

But the animal’s arrival could spell bad news for native shrews in the UK and is a ‘worrying development’ according to ecologists.

It would be the first non-native mammal to become established in the UK since the American Mink in the 1920s.

In Ireland, where the shrew is also non-native, it outcompetes existing shrew populations.

The Greater White-Toothed Shrew has become established in Ireland, and wherever it has been found has wiped out colonies of pygmy shrews, a species also found in the UK.

Mr Bond said that the picture he saw on Facebook caught his eye.

He said: ‘White-toothed Shrews look fairly distinctive with a head more closely resembling Finger Mouse or the Clangers than a normal shrew.

‘The problem with that identification was that they have never occurred on the British mainland before!’

Melissa kept the suspected shrew in her freezer so further tests could be undertaken.

A subsequent DNA test, undertaken by Ecotype Genetics and Swift Ecology Ltd, confirmed it to be the Greater White Toothed Shrew.

The Mammal Society’s Allan McDevitt said: ‘Given the rapid spread of the greater white-toothed shrew in Ireland, it is no surprise that it has eventually found its way to mainland Great Britain.

‘This is a worrying development however as this invasive shrew is clearly associated with the local disappearance of the native pygmy shrew in Ireland.

‘It is known to outcompete other species of shrews on other islands, so it is urgent that its distribution and potential impacts on other shrew species is quickly assessed.’

How the shrew got to Britain is unknown.

Melissa’s cats appear to have been catching White-toothed Shrews since at least 2015.

The British Mammal Society said that, given there have been pictures of the shrews dating back seven years, the species could be quite widespread already without anyone having noticed.

Melissa said: ‘I’ve always kept my cats indoors to reduce their impact on wildlife, so I was really surprised when they regularly started catching shrews.

‘Thankfully, most were able to escape without injury, but the opportunity to study those that didn’t make it has led to this invaluable discovery!

‘The wildlife on your doorstep is simply amazing and I’m thankful to Ian for his observations and guidance which led to us taking a closer look at something most people wouldn’t look at twice.’

The British Mammal Society said they would like the public to submit any unusual shrew sightings on their Mammal Mapper app, or on another wildlife spotting app, iRecord.

Gavin Measures, Invasive Non-Native Species lead at Natural England said: ‘Melissa finding the Great White Toothed Shrew is a fantastic example of how important it is to be vigilant for invasive species in our gardens, parks and green spaces.

‘This non-native shrew has had a negative effect on the Irish ecosystem. Evidence of this species in the United Kingdom now requires further investigation to establish how widespread it is, and any possible impact on our small mammal community.’