Greenland may be more vulnerable to climate change than once thought

Climate change may be having more impact on the melting Greenland ice sheet than previously thought, new research suggests.

A study from the Universities of Edinburgh and California San Diego has found that rising air temperatures amplify the effects of melting caused by ocean warming.

Dr Donald Slater, of the University of Edinburgh’s School of GeoSciences, said: ‘The effect we investigated is a bit like ice cubes melting in a drink.

‘Ice cubes will obviously melt faster in a warm drink than in a cold drink, hence the edges of the Greenland ice sheet melt faster if the ocean is warmer.

‘But ice cubes in a drink will also melt faster if you stir the drink, and rising air temperatures in Greenland effectively result in a stirring of the ocean close to the ice sheet, causing faster melting of the ice sheet by the ocean.’ 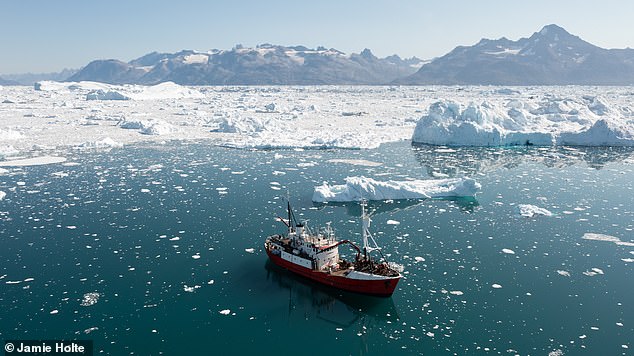 A study from the Universities of Edinburgh and California San Diego has found that rising air temperatures amplify the effects of melting caused by ocean warming. Pictured: Researchers monitoring water temperatures in Sermilik Fjord, southeast Greenland 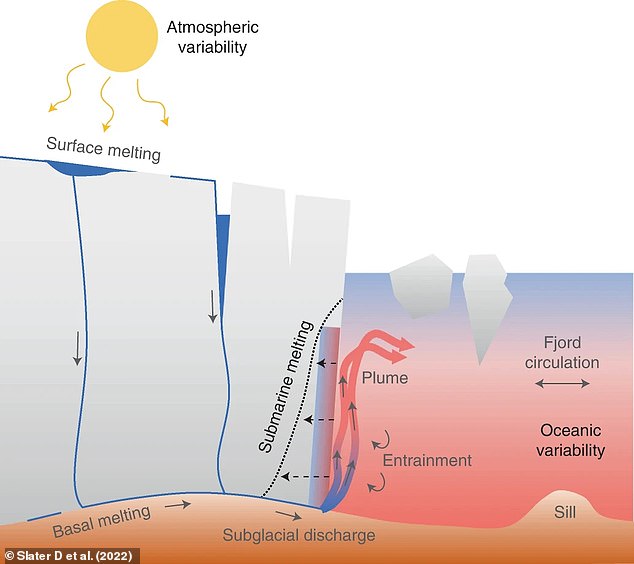 Submarine melting occurs when rising air temperatures melt the surface of an ice sheet, generating meltwater which flows into the ocean and creates turbulence. The turbulence results in more ocean heat that melts the edges of the ice sheet submerged in the water

Global warming is causing the temperatures all around the world to increase, but is particularly prominent at latitudes nearer the poles.

Permafrost, glaciers and ice sheets are all struggling to stay in tact in the face of the warmer climate.

This positive feedback loop is also found on glaciers atop mountains, many of which have been frozen since the last ice age.

Some animal and plant species rely on the cold conditions that the glaciers provide and are migrating to higher altitudes to find suitable habitats, thus putting strain on the ecosystems there.

The lack of ice on mountains is also increasing the risks of landslides and volcanic eruptions.

He added: ‘This unfortunately adds to the overwhelming body of evidence showing the sensitivity of the Greenland ice sheet to climate change, hence the need for urgent action to reduce greenhouse gas emissions.’

Previous studies have shown that rising air and ocean temperatures both cause the melting of the Greenland ice sheet, which covers over 650,000 square miles.

For the study, published in Nature GeoScience, researchers evaluated how one intensifies the other through ‘submarine melting’.

Submarine melting occurs when rising air temperatures melt the surface of an ice sheet, generating meltwater which flows into the ocean and creates turbulence.

The turbulence results in more ocean heat that melts the edges of the ice sheet submerged in the water as a result.

The team used observational data and computer modelling to analyse the effect warmer air and seawater had on submarine melting from 1979 to 2018.

They found that air temperature has had almost as much impact as ocean temperature on submarine melting, with some regional variations.

For example, ocean temperature is the main factor that controls submarine melting in south and central-west Greenland, while atmospheric warming dominated in the north-west.

The findings also suggest that if the atmosphere had not warmed since 1979, it would have significantly reduced the impacts of submarine melting.

The retreat of Greenland’s glaciers could have been reduced by half in the north-west region, and by a third across Greenland as a whole. 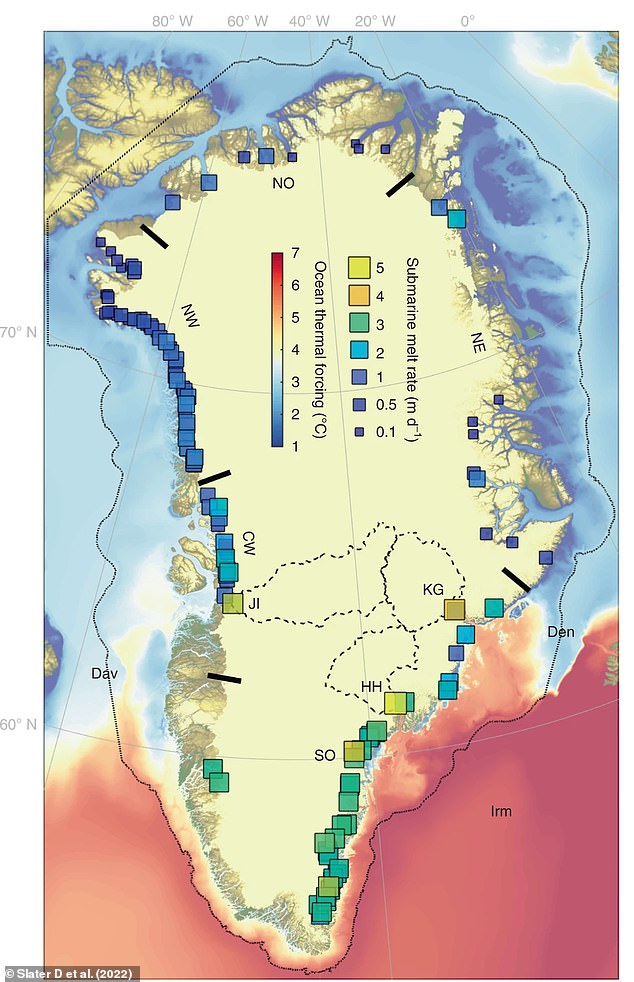 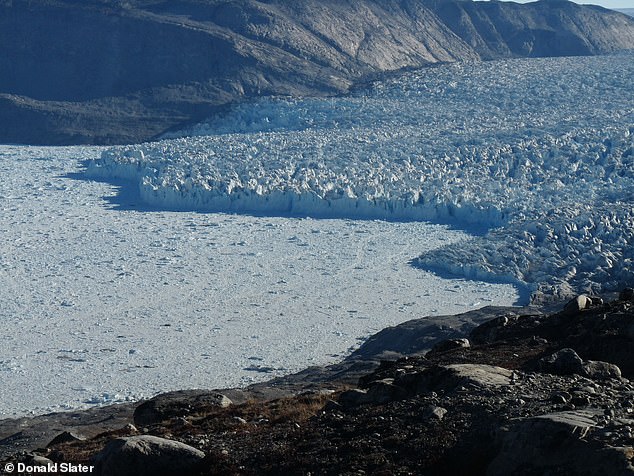 The findings also suggest that if the atmosphere had not warmed since 1979, it would have significantly reduced the impacts of submarine melting. Pictured: The Kangiata Nunata Sermia glacier undergoing submarine melting in southwest Greenland

In August, a study from Caltech and JPL in California, USA found that Antarctica’s ice sheets could also be melting faster than we thought due to coastal ocean currents.

They created a climate model that accounts for the impact of a coastal current called Antarctic Coastal Current (ACC).

The model suggests ice shelf melt rates are 20 to 40 per cent higher than previous predictions from other climate models.

The melting of the Greenland Ice Sheet will cause global sea levels to rise by more than 10 inches (27cm) – even if the whole world stops burning fossil fuels today, a new study has warned.

Researchers from the National Geological Survey of Denmark and Greenland (GEUS) studied two decades worth of measurements to predict the minimum ice loss from the Greenland Ice Sheet from climate warming so far.

Their findings suggest that, under the best possible situation, the Greenland Ice Sheet will lose about 110 trillion tonnes of ice.

‘In the foreseeable scenario that global warming will only continue, the contribution of the Greenland Ice Sheet to sea level rise will only continue increasing,’ said Professor Jason Box, lead author of the study.

‘When we take the extreme melt year 2012 and take it as a hypothetical average constant climate later this century, the committed mass loss from the Greenland Ice Sheet more than doubles to 78 cm [30 inches].’